The Arkansas Gazette was born on a Saturday evening in a two-room, rented log cabin where 23-year-old William E. Woodruff worked and slept at Arkansas Post in November 1819. It came into the world with The stuck to its name, two poems on its backside and the Arkansas Territory’s late-breaking election returns at the bottom of Page 3.

A weekly, it consisted of one sheet of paper folded in half to make four pages. Each page was 11¼ by 18½ inches with four columns of type and the occasional exotic luxury of a two-column ad. The front and back pages held information as much as five months old or essays, poetry and such: They were a wrapper around the latest news, which Woodruff printed inside on Pages 2 and 3.

The technology was very slow.

As described by typography expert Henry Lewis Bullen in the Gazette’s 1919 Centennial Edition, Woodruff’s Ramage press, bought secondhand but in good condition, allowed him to print one side of one sheet of paper at a time, but the platen that pushed that sheet onto his hand-set and hand-inked wooden tray of metal type was only big enough to cover one page at a time. To print both of the pages on one side of each sheet of paper, he pulled a heavy lever and operated a sliding mechanism at least twice. Then each sheet had to dry before he could print Pages 2 and 3 on the obverse.

As Margaret Ross explains in Arkansas Gazette: The Early Years 1819-1866, this easy but slow process required Woodruff to prepare Pages 1 and 4 well in advance of his weekly publication date — which until 1822 was on Saturdays, timed in theory to coincide with the latest mail. As he learned to complain most eloquently, the mail theory usually failed.

On that first Saturday, Nov. 20, 1819, Territorial Secretary Robert Crittenden held the territory’s first election. Most of Woodruff’s inside pages were typeset and waiting in the form, but he saved a small space for a “Postscript” at the bottom of Page 3. “Late in the day,” Ross writes, “Woodruff set the local returns and a news item gleaned from a letter received by a friend, and printed the inside pages of his first issue.” 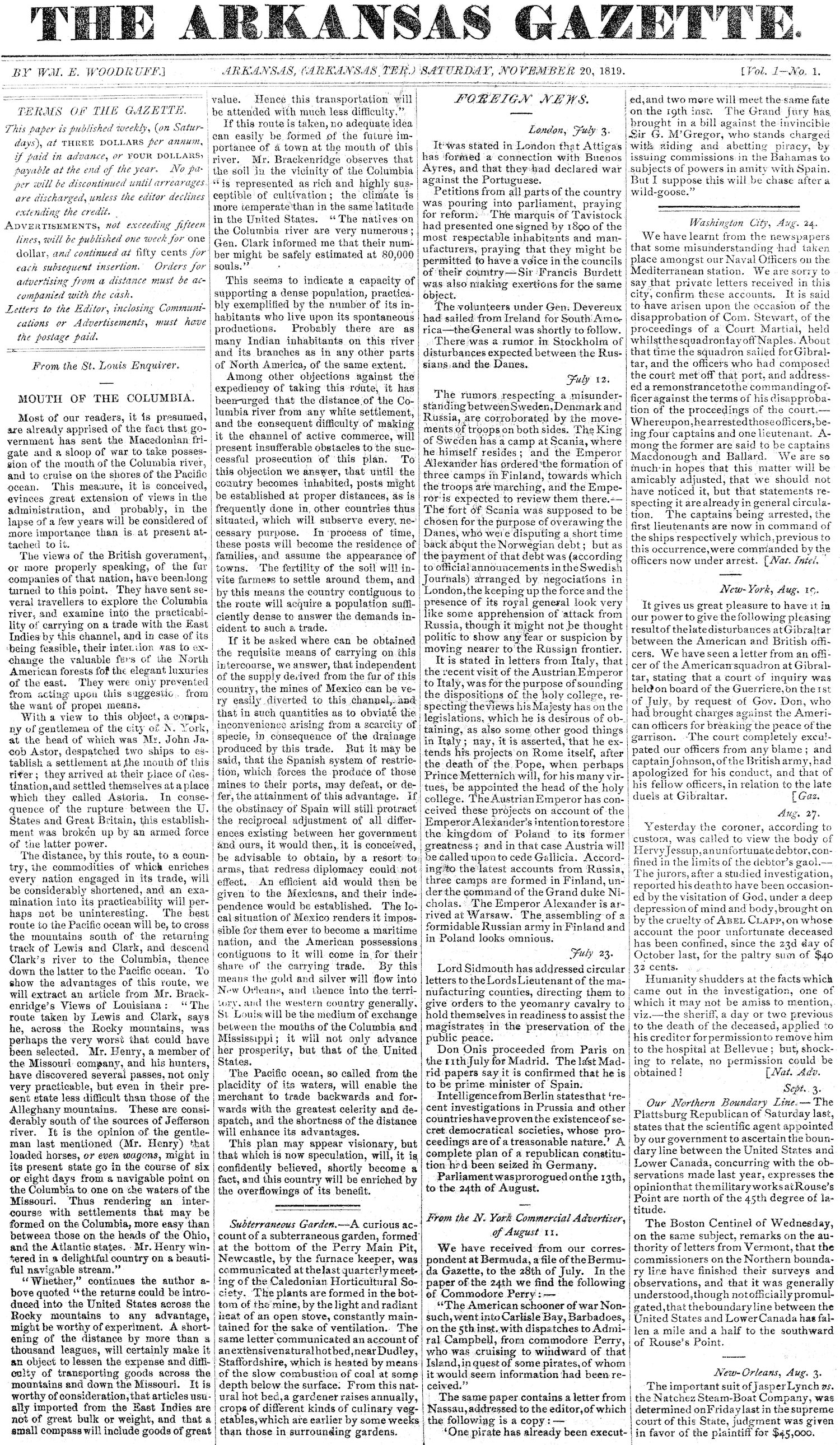