Page 3 of the Jan. 23, 1828, Arkansas Gazette contains news of a coroner’s inquest at Little Rock written not by editor William Woodruff but by “A Friend to Justice,” a presumably impartial reporter. One John T. Garrett, a deputy sheriff, had walked into Woodruff’s newspaper office twice on the evening of Jan. 17 with the expressed intent of cowhiding (whipping) or killing the lawyer Chester Ashley.

The second time, he found Woodruff and Ashley alone.

Four bullets were fired, and Garrett staggered out mortally wounded.

After three days and 20 to 30 witness accounts, the jury did not decide who fired the fatal bullet. But everyone agreed that Garrett had spent the afternoon making the rounds of saloons and muttering he was going to kill Ashley. Garrett’s friends included Territorial Secretary Robert Crittenden, and they had met in a saloon that evening. Woodruff’s pistol was not fired, and all the bullets were accounted for by his and Ashley’s accounts. Witnesses saw Garrett with two pistols earlier in the day, and other witnesses saw his clothing on fire when he left the Gazette.

The coroner was Dr. Matthew Cunningham, father and stepfather of two Woodruff apprentices and also the anonymous author of incendiary letters to the editor that in 1827 had helped to precipitate a duel in which Crittenden mortally wounded Territorial Delegate Henry Conway.

Cunningham’s stepson would found the Territory’s second newspaper (with Woodruff’s blessing), The Advocate. In 1832, in the pages of The Advocate, Cunningham accused Woodruff of shooting Garrett.

In front of Woodruff and other men, Garrett had accused Ashley of filing charges against him, to have him removed from office. Ashley told Garrett he had not filed any charges but had complained to Gov. George Izard about the man who gave Garrett his job.

Garrett stomped out to make a brief tour of the saloons and met his close friend Robert Crittenden at Nicholas Peay’s grog shop.

Ashley and Woodruff were alone at the Gazette office — on the northeastern corner of Markham and Scott streets, site of today’s Little Rock Chamber of Commerce — when Garrett returned. Garrett raised his pistol at Ashley, firing both barrels, as Woodruff grabbed his cloak collar, deflecting his aim. Both bullets hit a box near the fireplace.

A second pistol went off, and then Ashley fired. Ashley’s bullet passed through the fleshy part of Woodruff’s upper right arm and lodged in a map on the wall.

There were no bullet holes in his cloak, but Garrett had been hit in the abdomen. He staggered down the street about 25 paces to James Lemmon’s saloon, where he lay on the bed in which he died about 2 a.m.

Fifty years later, Woodruff told an interviewer that this time period was “not very good”:

“I found it difficult to avoid personal collision. I cannot say that I was afraid of my life but always went armed in those days. At times I had some apprehensions of being assassinated in my own house. Crittenden usually kept a class of men about his person who were regarded with suspicion for some of them were among the most desperate men in the country.” 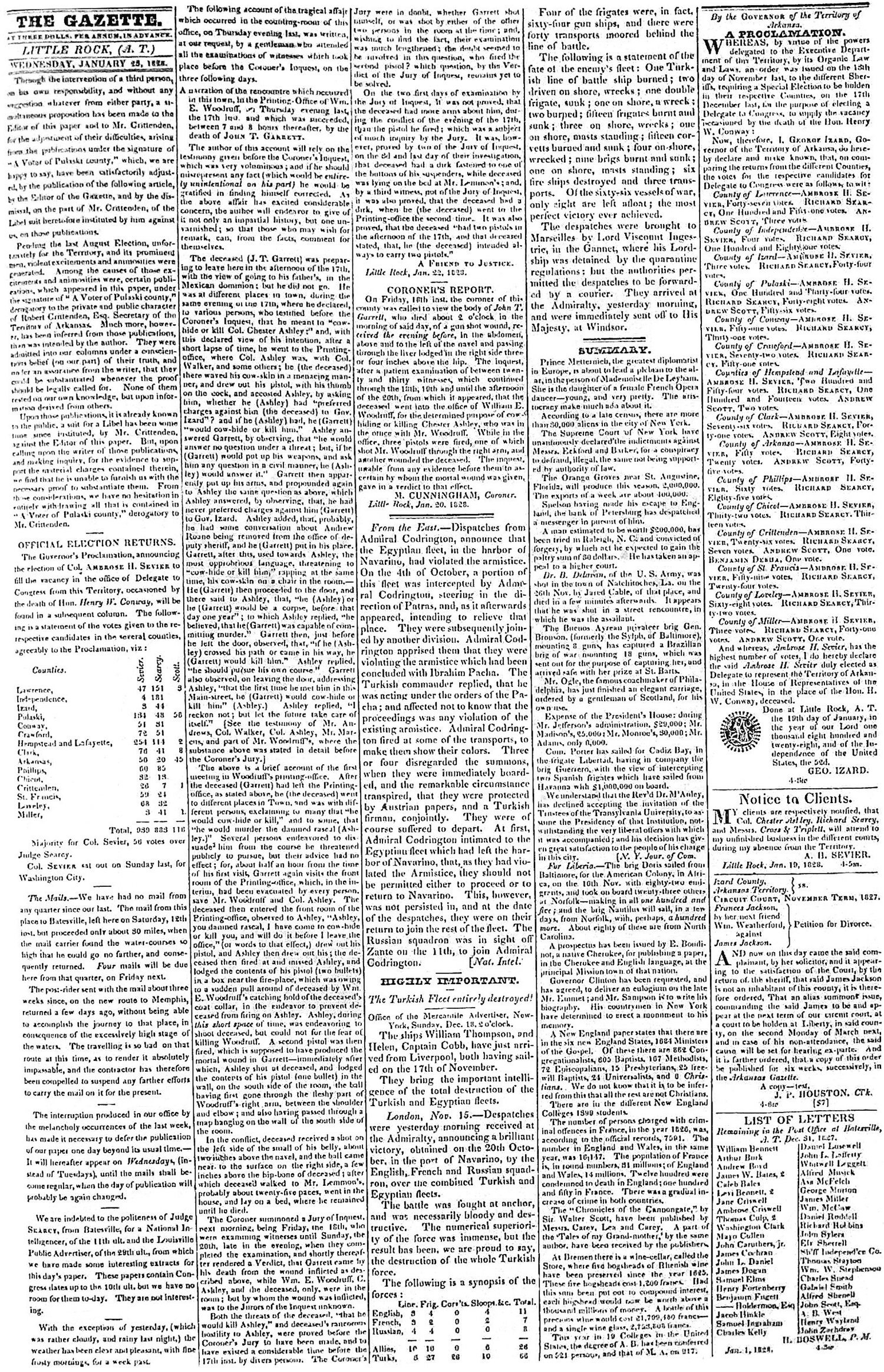