On Page 3 of his Nov. 10, 1829, The Arkansas Gazette, William Woodruff announces that his apprentice, Charles P. Bertrand, intends to start the Arkansas Territory’s second newspaper. In a witty, backhanded way, Woodruff promotes the enterprise by assuring readers he has nothing to do with it.

Bertrand would complete his apprenticeship Nov. 23 when he turned 21. He planned to travel to Cincinnati to buy a press.

In Arkansas Gazette: The Early Years 1819-1866, historian Margaret Ross suggests Woodruff had no idea that Bertrand, who was the stepson of his apparent friend Dr. Matthew Cunningham, would promote the interests of Woodruff’s foe Robert Crittenden.

Crittenden was out of office and practicing law. His bid to replace Gov. George Izard (pronounced Iz-ARD), who died in November 1828, had been thwarted by incoming President Andrew Jackson, who didn’t like Crittenden’s brother. Jackson appointed John Pope of Kentucky as governor. He then replaced Crittenden as territorial secretary with William Fulton of Alabama.

Bertrand’s prospectus for The Arkansas Advocate appears on this page as well. He promises that the Advocate will be neutral, having nothing to do with the parties whose “infuriate zeal” has for years been a reproach to the county, retarding its growth — “the Advocate shall be open to all parties, and devoted to none.”

By parties Bertrand meant people and their personal enemies. As historian Michael Dougan explains in Arkansas Odyssey: The Saga of Arkansas From Prehistoric Times to Present, personality and personal factions were the dominant influences in Arkansas politics before 1831.

Bertrand states that the Advocate will be Republican in politics. In 1829, the word proclaimed the editor as loyal to Andrew Jackson. Woodruff had made clear his preference for John Quincy Adams.

Bertrand stated that he would attract new settlers to the territory he grew up in by publishing descriptions of its topographical and mineralogical virtues. He would accept discussion of all topics, including religion. He would accept letters promoting any Christian denomination.

Just like the The Arkansas Gazette — which again used the word The in its nameplate — the Advocate would cost $4 per year, or $3 if paid in advance. 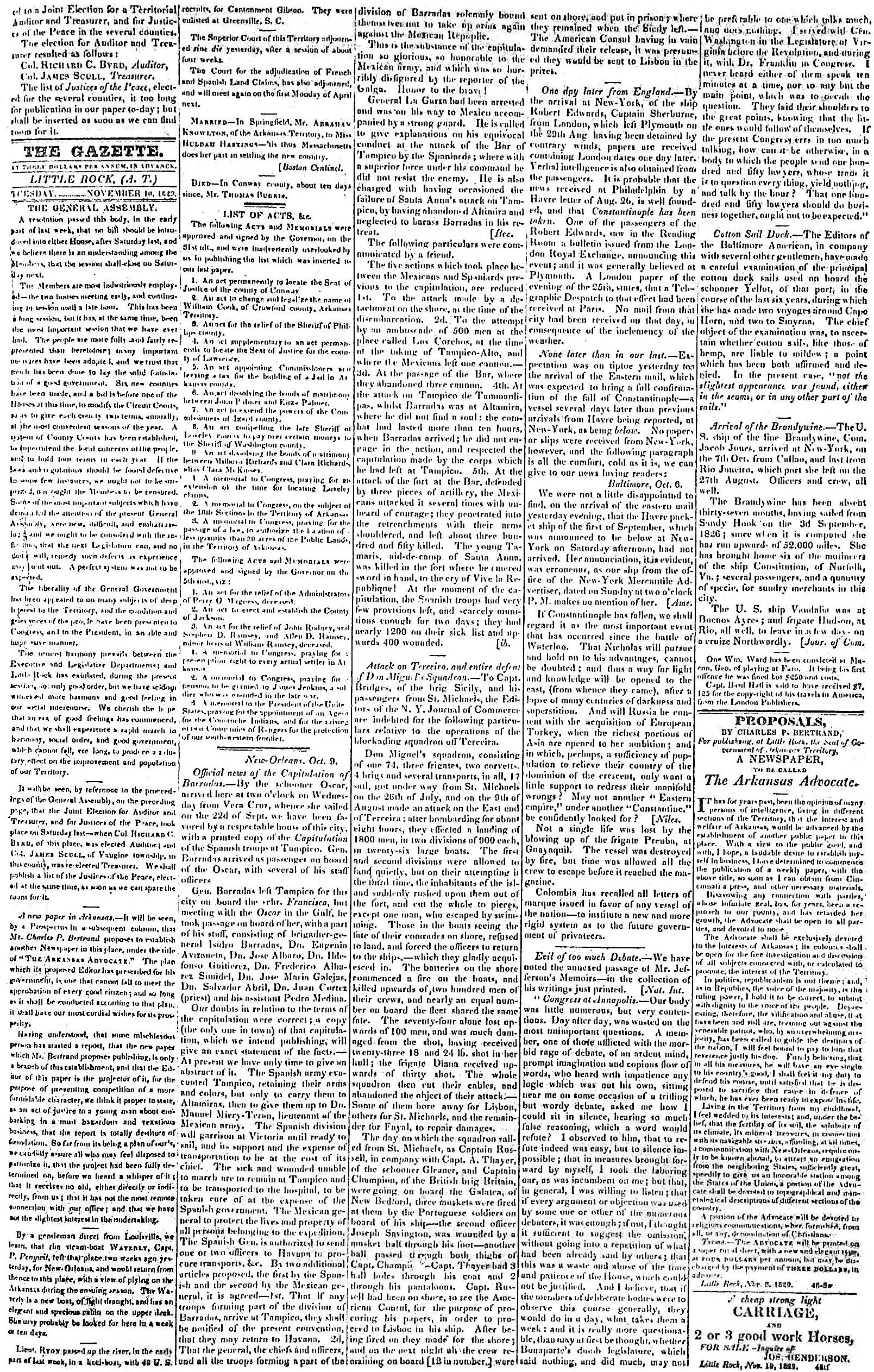