When an account of the worst tornado in anyone’s memory appeared in the Arkansas State Gazette on June 10, 1840, the editor was Edward Cole, who had been William Woodruff’s foreman and managed his land agency. Cole had owned the Gazette seven months.

When he contracted to buy the paper from Woodruff for $5,000, its offices were in the Woodruff home and had been since 1827. Gazette historian Margaret Ross says Woodruff’s brick building on the northeast corner of Markham and Scott streets, site of today’s Little Rock Chamber of Commerce, was the third of eight sites the Gazette occupied between 1821 and 1866.

Cole wanted his own. He undertook $5,460 more debt (counting 8% interest) to get a primo spot on Markham between Main and Scott streets. He mortgaged this land to Woodruff. Cole built a three-story brick building with a two-story attached printshop — more debt.

The building held his land agency, bookstore, rentable office space and housed him, his bachelor employees and his slaves.

The great tornado wrecked steamboats and collapsed buildings, including the office of the Arkansas Star. Owned by a pugnacious lawyer, David Lambert, the Star had just moved in.

Lambert campaigned in print for William Henry “Old Tippecanoe” Harrison, the Whig candidate for president. Eli Colby, editor of the Times and Advocate, also backed the Whigs; but each editor sniped at the other until both were so furious they had a gun and knife fight in the street.

Cole’s Gazette backed incumbent Martin Van Buren, Democratic Republican; but he held to loftier ideals. Ross writes that Cole once even refused to publish a report about a trial in Fayetteville because “crime begets crime,” and crime stories gave criminals ideas.

Nevertheless, Cole also fought Lambert in the street, and whipped him, with a whip.

After the tornado, Lambert announced that the Star had new backers and would rise again. He set out for Louisville to buy paper with money from these backers but instead opened a law office in Lexington, Ky., and never came back.

In September 1840, Cole quit. He hadn’t paid anything on his land, and he hadn’t paid Woodruff any of what he owed for the Gazette. And so it looked as though Woodruff was once again sole owner. But then Cole’s business manager, George H. Burnett, agreed to take responsibility for the paper and some of its debt. 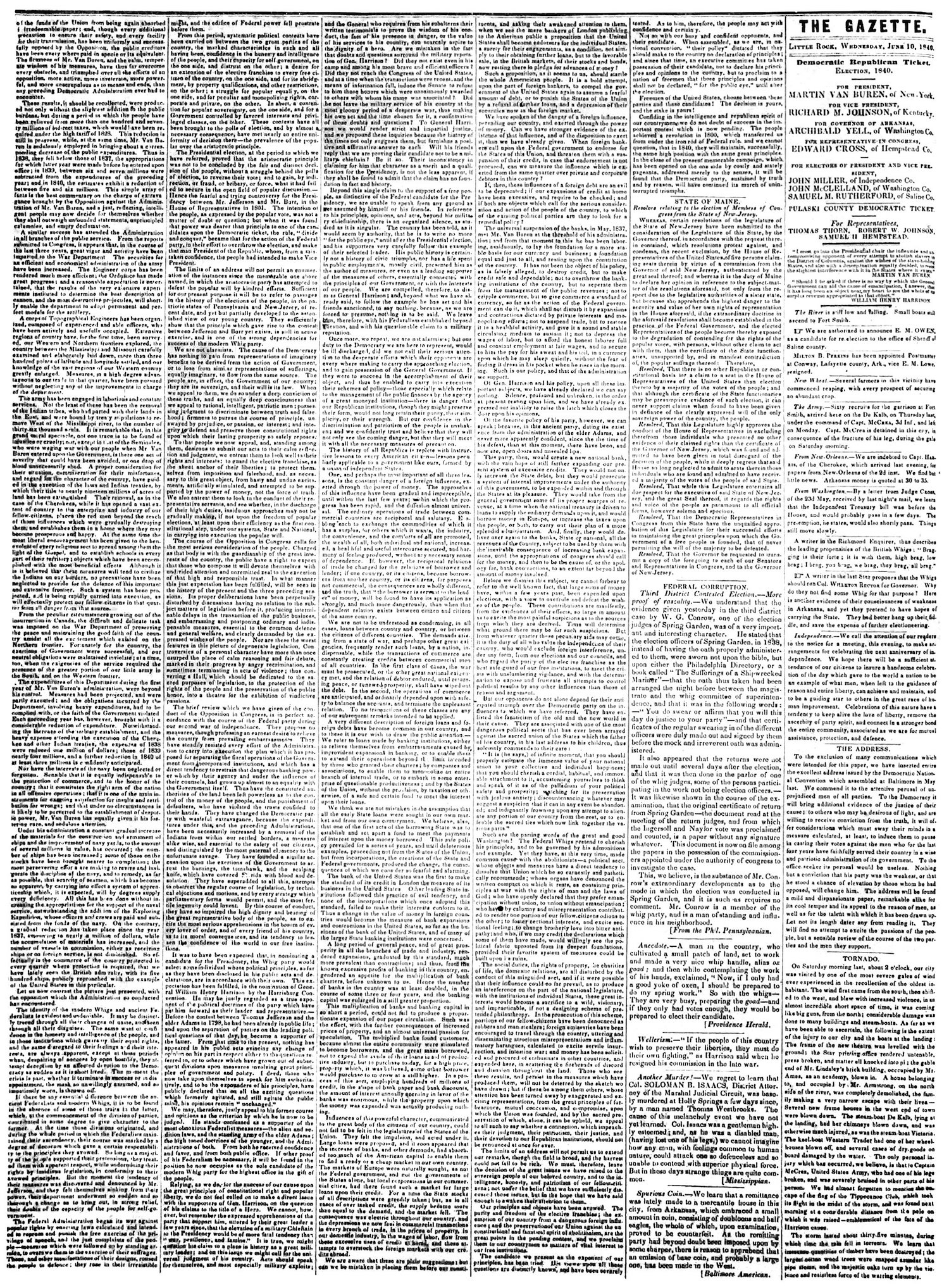