Your money’s no good here, was publisher William E. Woodruff’s message to his readers and advertisers on Nov. 30, 1842, and it wasn’t a gracious one. Find another way to pay, was the follow-up.

“Agents and patrons of the Gazette are again reminded that we do not receive the Notes of the banks of Arkansas (except the State Bank, payable at Little Rock) at par, for subscription or other dues to this office. Our terms of subscription, advertising &c. are predicated on specie, and all payments MUST be made in specie or its equivalent.”

The Legislature’s first two official acts after statehood six years earlier were authorization of charters for the government-owned State Bank of Arkansas and Real Estate Bank of Arkansas, which offered public subscriptions. Capital would be obtained by selling bonds in the East and in London markets, with principal paid by bank profits.

After the Panic of 1837, both banks stopped redeeming notes with gold and silver, but kept issuing progressively worthless currency in order to make more loans, according to the Encyclopedia of Arkansas History and Culture. As a result, both banks began closing in 1842 and were out of business within two years. The state Constitution was re-amended in 1846 to prohibit the incorporation of any more banks, and none were until after the Civil War.

“Our expenses are very heavy and have to be paid in cash,” the Gazette scolded deadbeat subscribers and warned them that failure to pay before 1843’s first issue would result in a $4 charge for the year.

Woodruff’s woes from the bank panic were explored later on Page 2 in a “Memorial” to the General Assembly urging members to “discontinue” a lawsuit in Pulaski Circuit Court that sought reimbursement of some of the commission he had been paid during his service as state treasurer. He had, he explained, gone to considerable personal expense to save state funds from the collapsing Bank of Natchez.

Other news told of the “dreadful” Memphis fire that resulted in the destruction of the steamboat Hector, death of passenger Henry Wilson of Randolph and the loss of 1,500 bales of cotton (insured for $30 each). Pilot Willie Lamb was awakened by the heat and escaped through the flames.

Political contention made for pithy one-liners to fill the odd space. On the topic of trade, it was stated that “all good democrats wish to be protected from, but not by a tariff.” And some political personalities set the tone: “We are all made of clay, but very few of us wish to go to Clay.” 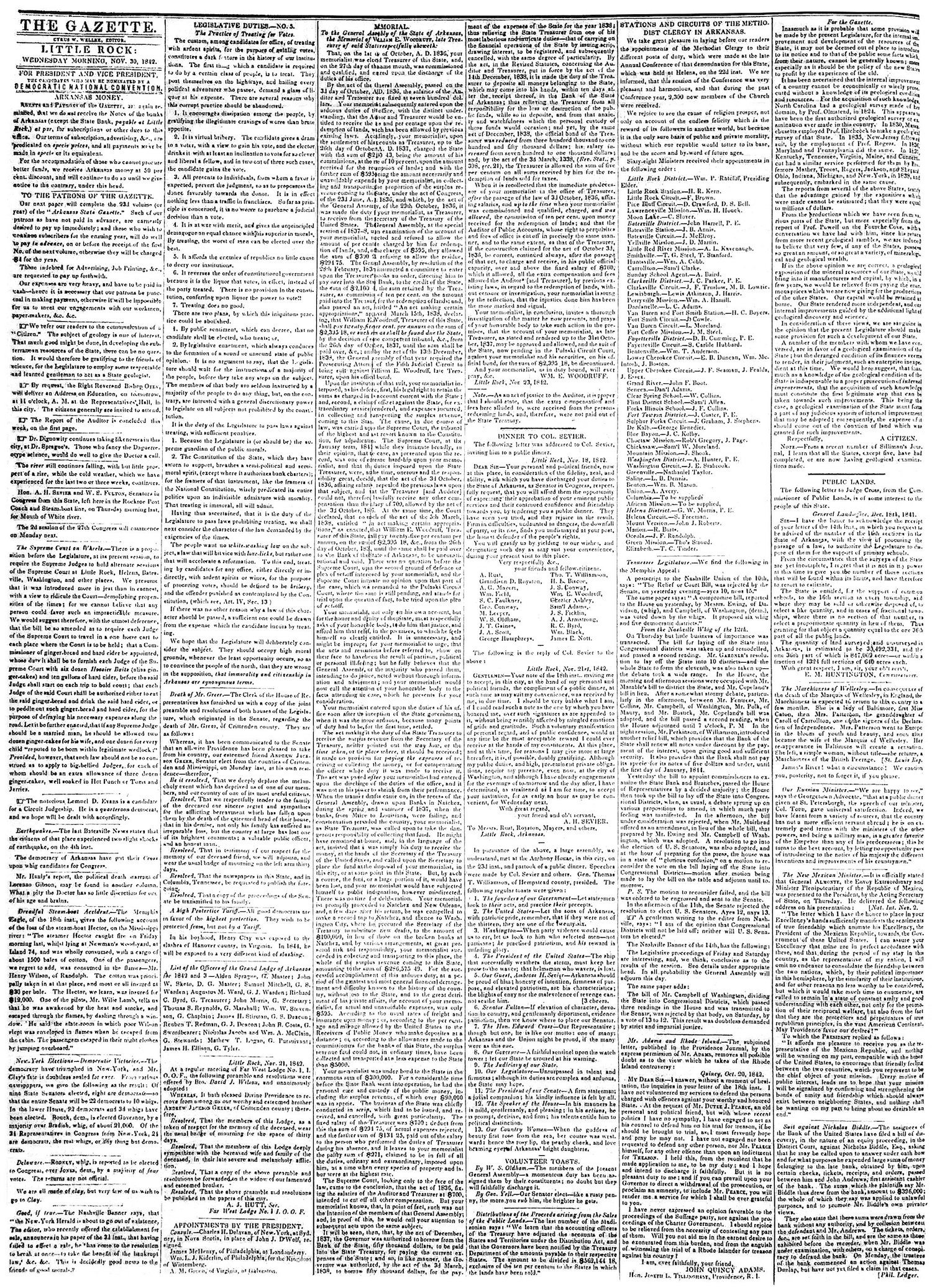