The Arkansas State Gazette was very nearly bankrupt at the end of 1849 when editor George B. Hayden missed a payment on some debts that had been written so that failure to pay triggered the sale of his newspaper.

And so in January 1850, Dr. Albert H. Webb bought the paper — as was reported by William Woodruff’s Arkansas State Democrat on Jan. 18.

Webb had no background in publishing. Gazette historian Margaret Ross suggests he acted as a frontman for prominent Whigs who were willing to sell Woodruff their equity in the paper but didn’t want to be seen handing the state’s only politically Whig outlet to a Democrat. Webb sold it to Woodruff, who on Feb. 8, 1850, published the first issue of the Arkansas State Gazette and Democrat.

The motto of the new paper was a quotation from Thomas Jefferson that appeared under the nameplate: “TRUTH is in no danger from ERROR, so long as REASON is left free to combat it.”

Under his new masthead on Page 2, Woodruff added: “Circulation — Larger than any other Paper in the State” and a note that his offices were upstairs in former Mayor Roswell Beebe’s building on Markham Street and Elm (Elm was an alley) His purchase came with enough equipment to outfit several small papers; on Feb. 22 he advertised for sale four printing presses and other supplies.

In a dramatic contrast with Hayden’s six-column Gazette, the seven-column Gazette and Democrat was jammed with information, letters from California, conditions of rivers, reports from steamboats, that week’s mayoral election in Little Rock. An advertising contract the Gazette held to publicize mail routes crowded the Democrat’s usual tidbits and essays off Page 1, but Woodruff assured readers that as soon as the contract ended, general-interest material would be back — or he would enlarge the paper to make room for it.

This is Page 1 of the second issue of the Gazette and Democrat, which, while a bit of a squinter, is more legible than that of Feb. 8. To read (in modern type) Woodruff’s editorial from that first edition, see arkansasonline.com/200/1850bonus. 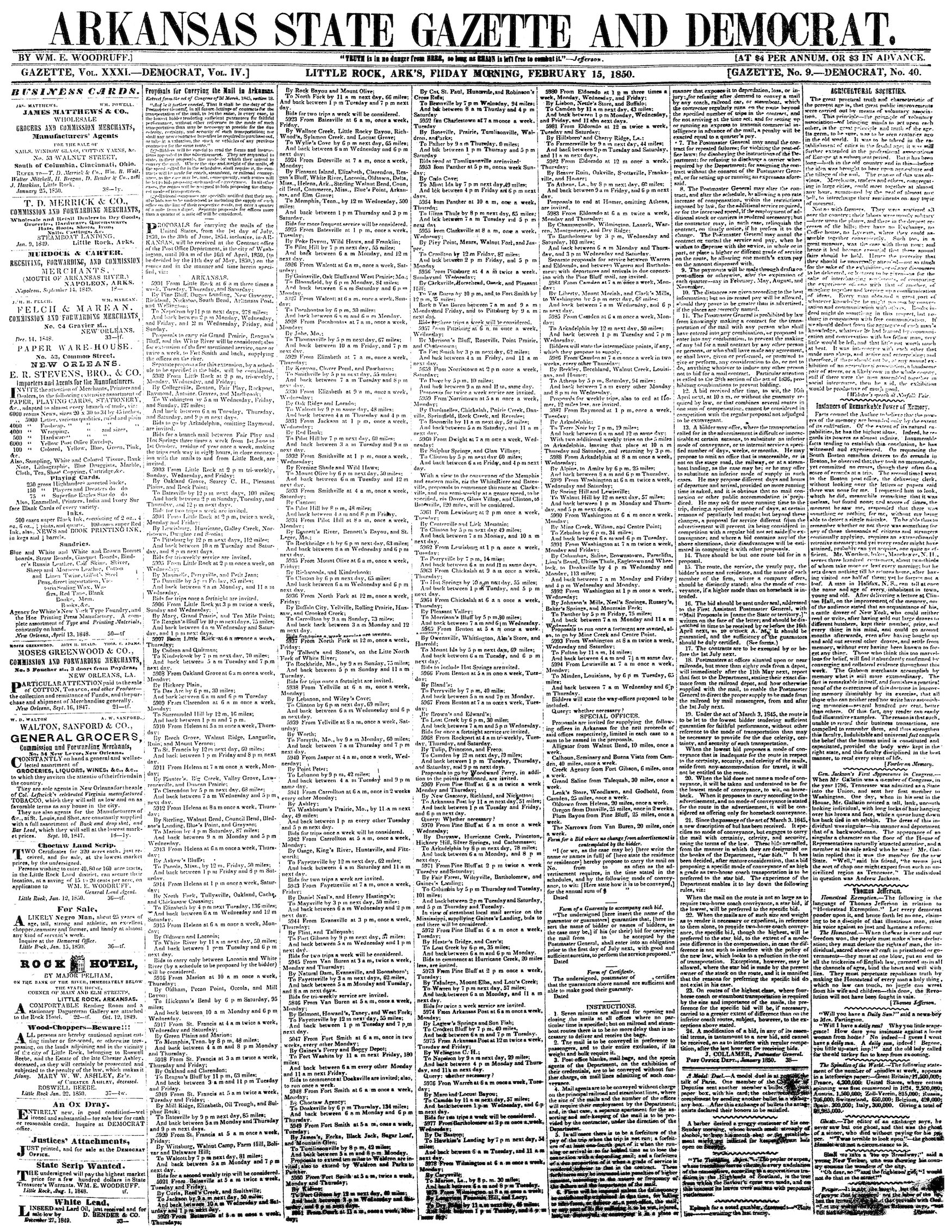