Dr. Solon Borland returned to Arkansas in 1855 fresh off a violent incident in Central America that outraged critics of President Franklin Pierce.

The former editor of the Arkansas Banner (who shot Arkansas State Gazette editor Benjamin Borden in the side in a duel) had gone from hero of the Mexican War to U.S. senator. In 1853, he left the Senate to be Pierce’s minister plenipotentiary to Central America.

While traveling by steamboat on the San Juan River, Borland shot and killed a native man. He managed not to be arrested, although a posse came for him at a port in Nicaragua. Someone in a crowd tossed a bottle that cut his face, but he sailed safely to New York.

After Borland made his report, Pierce sent a warship to the Nicaraguan port to demand an apology. The locals refused. The U.S. captain bombarded the town and burned it down while 300 residents watched from the forest.

A national uproar ensued, with Pierce’s critics condemning Borland’s behavior and recalling past instances of his pugnacity. For example, in 1852, after the (small, frail) superintendent of the U.S. Census persisted in asking him to include some data in a report, Borland punched him in the face.

Back in Arkansas, Borland bought a drugstore, resumed medical practice and tried to start a medical newspaper, which never got off the ground. In June 1855, he bought a half-interest in his friend Christopher Columbus Danley’s Arkansas State Gazette and Democrat and became its senior co-editor.

The American party arose about this time from what had been a fraternal society — the Know Nothings. When Danley was sole editor, the Gazette denounced the Know Nothings as un-American because they had been secret; and he criticized the Democratic party because Northern Democrats supported abolition. In June 1855, the Know Nothings became explicitly Southern and pro-slavery.

The former owner of the Arkansas Whig, John Milton Butler, decided to start a Know Nothing newspaper. But on Aug. 5, he and his brother-in-law killed each other in a gunfight on Markham Street.

Five days later, Borland wrote the editorial on this Page 2 of the Aug. 10 Gazette proclaiming its alignment with the Know Nothing party: against immigrants, against Catholics, for slavery. 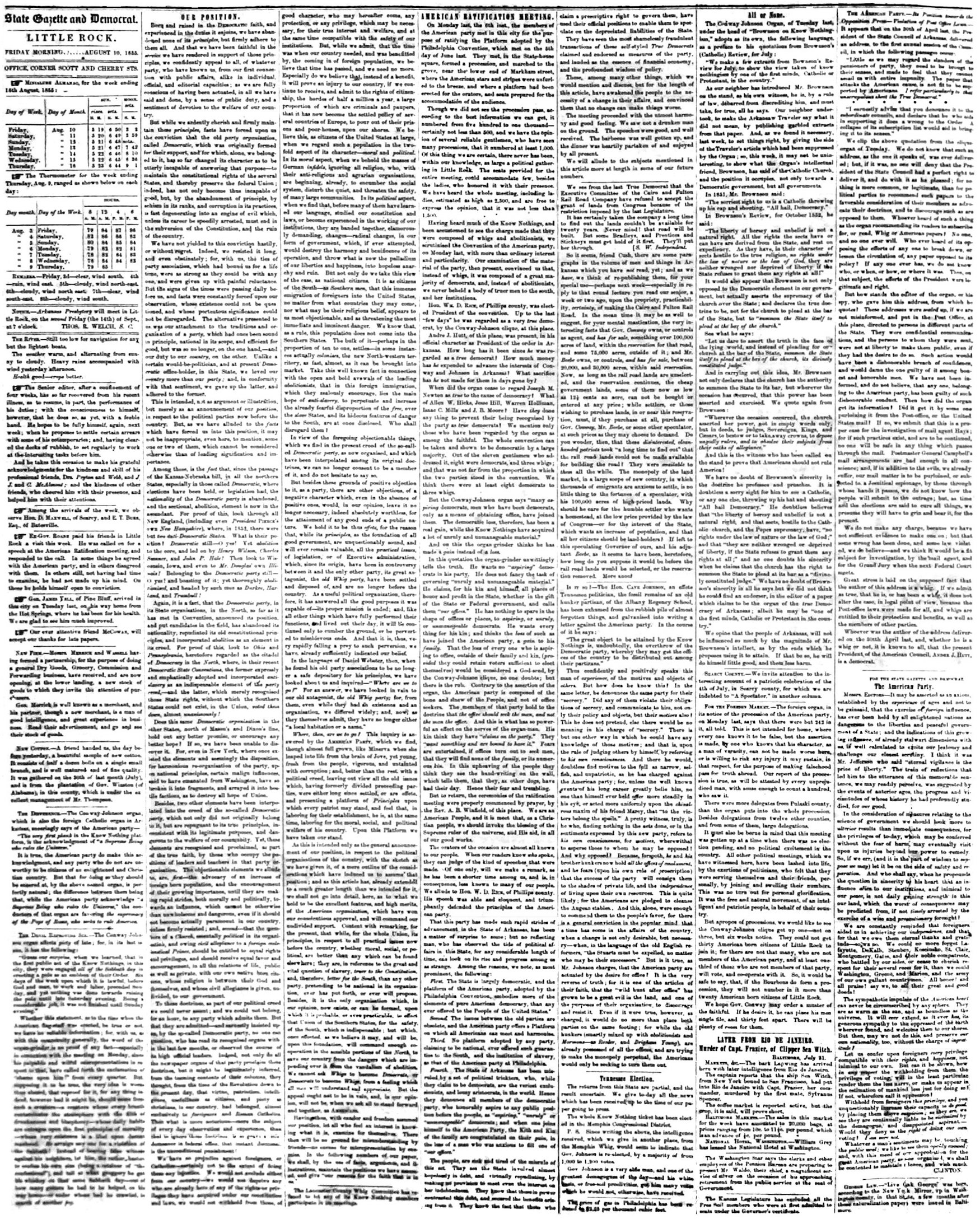