When the Arkansas State Gazette resumed production in 1865, the Confederate cause was lost, but a few field commanders had yet to accept the news. Already Gen. Robert E. Lee had surrendered at Appomatox; John Wilkes Booth had assassinated Abraham Lincoln; and whether it had a legal quorum or not, the Arkansas Legislature had ratified the Thirteenth Amendment, which abolished slavery.

The editor of  The National Democrat, Dr. Cincinnatus V. Meador, had just announced he was closing his “Copperhead” newspaper to run for Congress. Meador had rented the Gazette office from Christopher Columbus Danley, who had regained control of it by taking President Lincoln’s amnesty oath of allegiance in April 1864. Meador announced his candidacy May 9; Danley and his partner William F. Holtzman published the first daily issue of the Gazette on May 10.

It would be a nonpartisan publication, and each day’s paper was printed the day before. The Gazette was the only Little Rock paper that subscribed to telegraph news service, but it had no local reporter and both editors were gravely ill. Danley had never recovered from his 1862 buggy wreck, and Holtzman had tuberculosis.

This Page 1 of the May 15, 1865, Gazette reports actual news, the capture May 10 of Jefferson Davis, president of the fallen Confederate government. Page 2 contains a letter from Gov. Isaac Murphy urging citizens to meet, decide who should fill county offices and forward their names to the governor for approval. “The land is steeped in blood — innocent blood — and defiled with crime,” he writes. “Let us wash it out with tears of sorrow and and repentance, works of love, kindness and charity, that peace, good will and confidence may return and dwell among us.”

Since its founding in 1819, the Gazette had always been a weekly. Now it appeared Monday through Friday as a four-column four-pager costing 10 cents a day or 30 cents per week, payable to the carrier. A weekly option, printed on Saturdays, compiled the top stories from each day into four pages of six columns each and cost $4 per year — up front — “No name entered until the money is paid.”

Danley died Oct. 3 in his rooms at the Gazette office. He was 48. Holtzman draped the next daily and weekly editions in mourning and soldiered on alone, with his own death growing in his lungs. 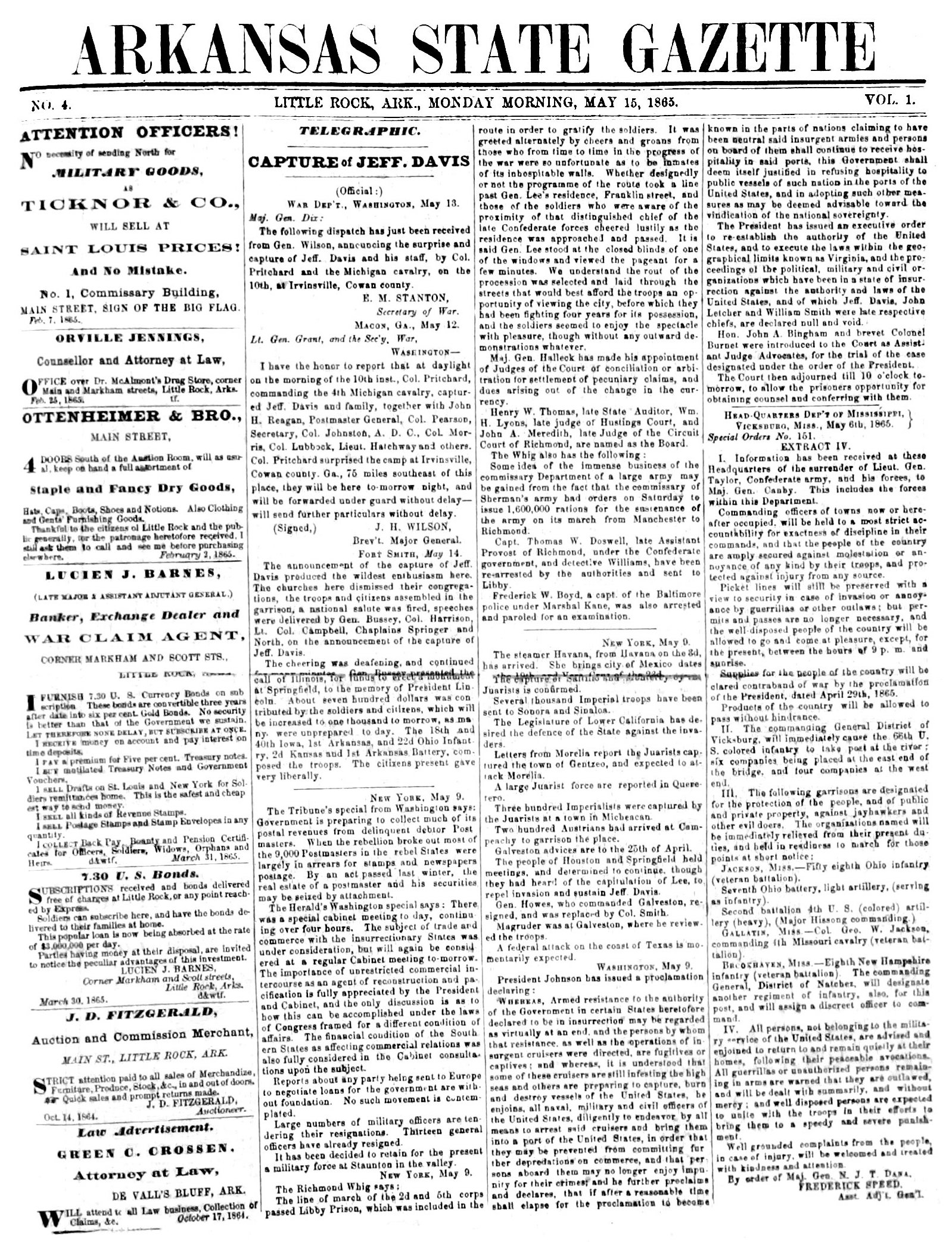