Page 1 of the Nov. 26, 1868, Daily Arkansas Gazette prints part of an address by Arkansas Gov. Powell Clayton that the editor, William E. Woodruff Jr., elected to split into three parts and publish as a filler over three issues. This part of the speech ticks through Clayton’s reasons for imposing martial law on 10 counties Nov. 3. (Eventually he would add four more counties.)

Clayton names some of the white and black citizens harassed or murdered by the Ku Klux Klan in these counties. Among them was U.S. Rep. James M. Hinds, shot while campaigning for Republican presidential candidate Ulysses S. Grant. Clayton survived an attempt on his own life.

The Gazette had printed Clayton’s proclamation Nov. 6 and responded with an editorial that deployed quotation marks sarcastically to pooh-pooh the idea of “hundreds” of murders conducted by a “secret organization” of “military character.”

The governor, a Republican, had been a Union brigadier general whose cavalry fought in the Battle of Helena, the Little Rock campaign and the Camden Expedition. He commanded the Union garrison at Pine Bluff and repelled Gen. John S. Marmaduke’s attack in 1863. He and his brothers bought a plantation at Pine Bluff, and he had settled there after the war.

Woodruff, son of the founder of the Gazette, had been a Rebel artillery officer and belonged to one of the state’s larger landowning families. He was a Democrat who opposed civil rights for black men, arguing that ex-Confederate white men had been stripped of theirs.

In his history of the state press, Community Voices, Michael Dougan notes that more than 500 people lost their lives to political violence in Arkansas between 1867 and 1874. Roughly half of the state’s 47 newspapers in 1870 supported some version of Republicanism or peaceful resistance.

Woodruff, Dougan notes, called for “total war”: “In the present political struggle we believe that the end we seek will justify the use of ANY means. We will not ‘play honest’ with utter scoundrelism, but will use any and every weapon with which providence has gifted us to fight it.”

According to the Encyclopedia of Arkansas History and Culture, “The governor responded to the emergence of the Klan more decisively than did the governors of most Southern states. … His declarations of martial law in fourteen counties in 1868, despite conservative criticism to his actions, successfully ended Klan activities within the state early in his administration.” 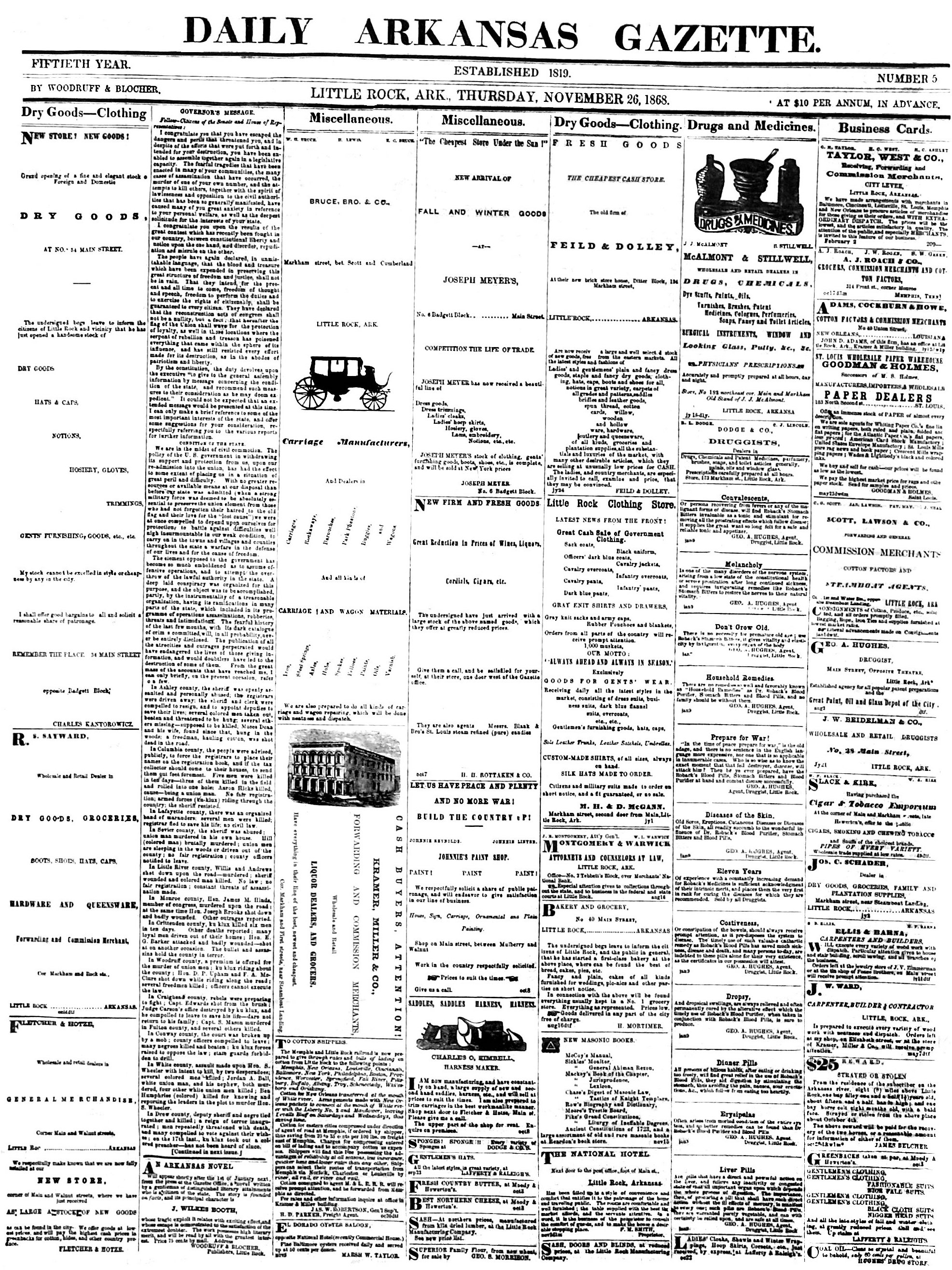