On Jan. 6, 1873, Elisha Baxter — scalawag nominated by the party of the carpetbaggers — was inaugurated as governor, having claimed more votes than his opponent, another Republican, Joseph Brooks — carpetbagger supported by scalawags and Democrats. Both had made similar campaign promises.

The new governor made himself unpopular with Republicans by keeping one of his: a constitutional amendment to restore civil rights to thousands of ex-Confederates who were disenfranchised during Reconstruction. The people would vote yea or nay March 3.

Page 1 of this March 2, 1873, Daily Arkansas Gazette has the governor’s proclamation and a notice — “Down With Disenfranchisement” — urging all Democrats who could vote to drop their boycotts and attend this election.

Over resistance from his party, Baxter declared the amendment approved: 25,199 votes for and 3,695 against.

In March and April, the still-Republican General Assembly created nine counties. As the (hostile, Democratic) Gazette editorial page noticed, each required judges, prosecutors, county supervisors, circuit clerks and recorders, supervisors — hundreds of officeholders — and all would be appointed by the Republican governor. In Arkansas, A Narrative History (University of Arkansas Press, 2013), Thomas A. DeBlack writes that Baxter further annoyed his base by filling these posts with Conservative Democrats and Liberals as well as Regular Republicans.

Some he pulled from the General Assembly, which, added to resignations, opened 44 seats. In August, he scheduled a special election to fill them.

Meanwhile, Brooks averred that he had been usurped. In June, he sued Baxter for the governorship, its salary and emoluments. The state Supreme Court declined to allow the attorney general to open a case against Baxter. Brooks’ suit would lie dormant for 10 months.

In September, speculation in railroad bonds and cost overruns in construction combined to collapse lenders, and panicked depositors raced to get their money out of banks everywhere, including in Arkansas. This Panic of 1873 triggered a financial meltdown that was known as the Great Depression — until the disaster of 1929 raised the bar for depressions.

In November 1873, the result of the franchise amendment was felt: Newly re-enfranchised ex-Confederates voted Democrats into the Legislature’s vacant seats, and Republicans lost control of the state assembly. 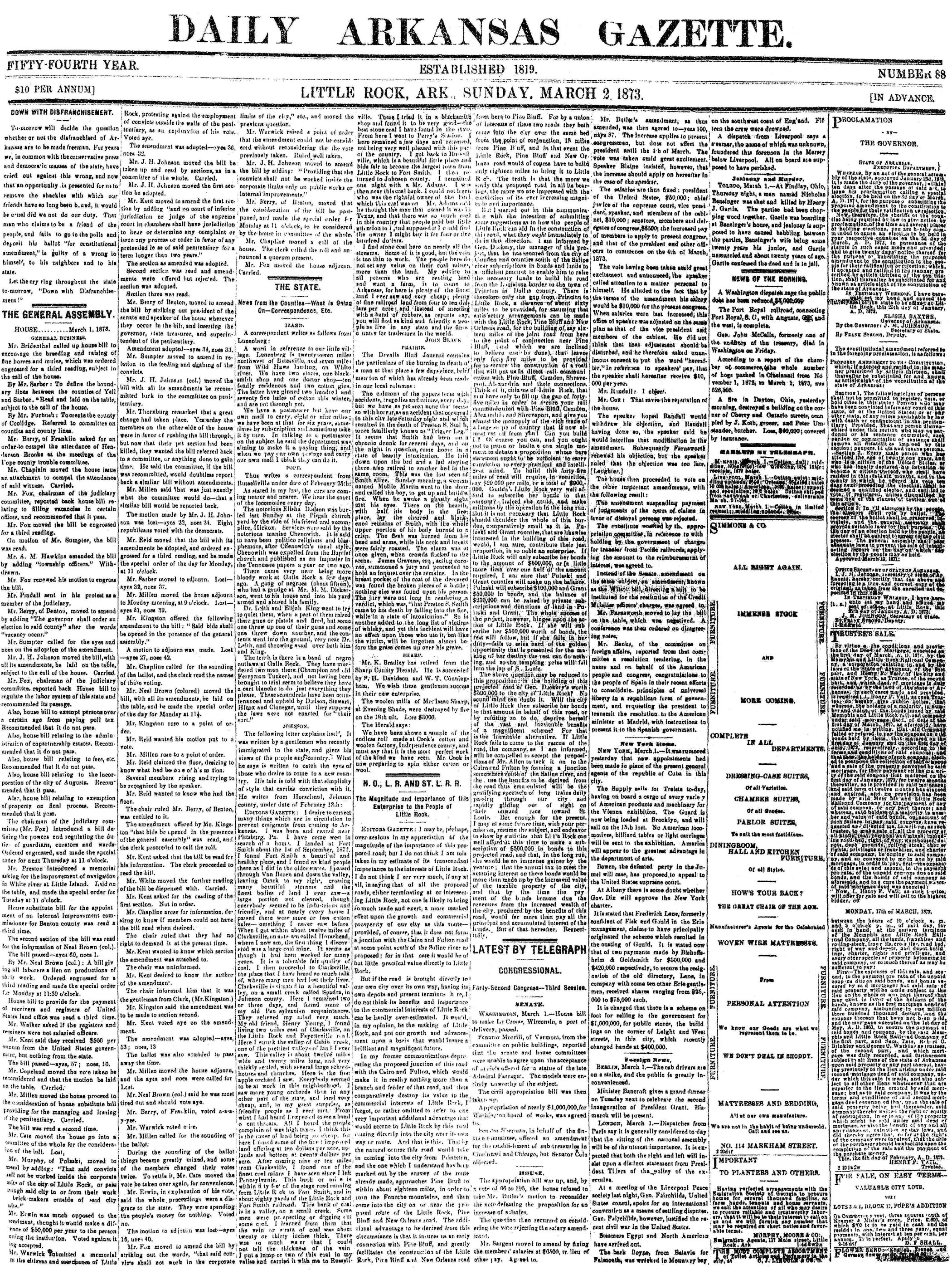