The Daily Arkansas Gazette had commemorated America’s centennial year with a change in leadership in 1876.

Exactly one year before this edition (and 57 years after his father had printed the Gazette’s first edition), Maj. William E. Woodruff Jr. retired permanently from the Gazette he had owned for a decade, handing it over to John D. Adams and William D. Blocher, who then hired James Mitchell to be the editor-in-chief.

This Page 1 from the Nov. 20, 1877, edition of the Gazette celebrates the paper’s 58th anniversary. It was the first edition of the newspaper’s 59th year, featuring a brief history and a congratulatory message from William E. Woodruff Sr., the paper’s founder.

But Woodruff Sr. wasn’t content just to send his greeting to the newspaper’s office to be printed — he visited the office to set a stick of type himself. The Gazette’s 81-year-old patriarch, he had retired from the business in 1853 to devote time to his land agency and farming. He ended his printed passage: “To show that I still feel an interest in the old Gazette, I shall call at your office, today, and set up a stick-full, to show you that I have not forgotten the boxes, or how to set type.”

Each paper distributed that day was accompanied by a reprint of the original Arkansas Gazette from Nov. 20, 1819.

The historical editorial proudly claims that it was the first newspaper printed in Arkansas, and the oldest paper west of the Mississippi published continuously under the same name. An engraving made from a pencil sketch gives a “faithful representation” of the first home of the Gazette, the log cabin at Arkansas Post; while another engraving highlights the size and grandness of the current Gazette location, a 3-story building at the corner of Markham and Scott streets, “constructed especially for [the Gazette’s] use.” The latter was the same building that was destroyed in the fire of 1875, but was later restored.

Adams, Blocher and Mitchell vowed to continue the Woodruffs’ legacy: “The Gazette starts out with renewed energy, determined to continue as it began, the friend of the people of the State, and of every measure which will tend to promote their welfare.” 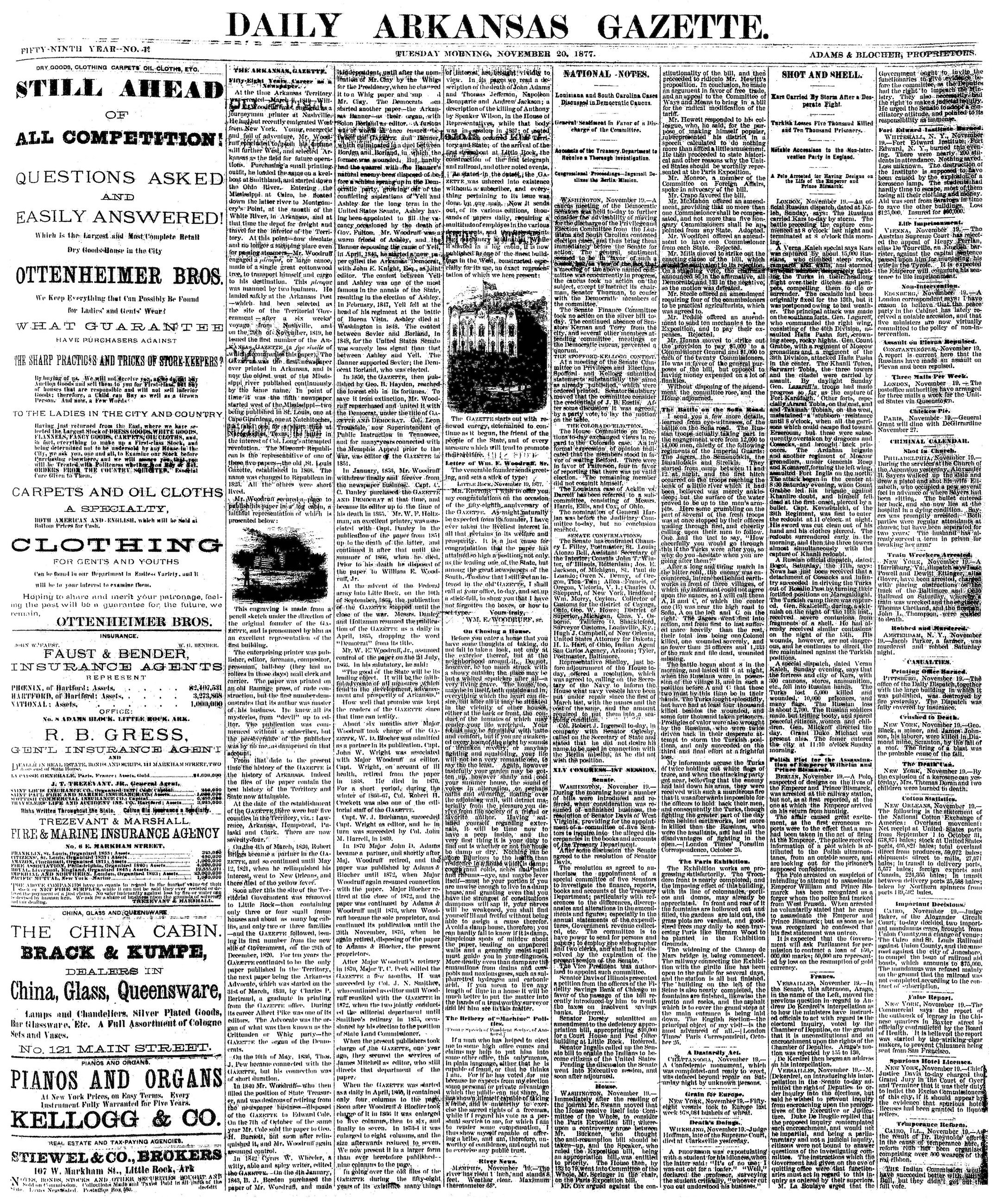