Arkansas women took a great interest in how the state might be represented in Chicago for the Columbian Exposition of 1893. It celebrated the 400th anniversary of Christopher Columbus’ arrival in the New World with an 11-block fairgrounds made available by the Great Fire of 1871.

The Arkansas World’s Fair Association, the Board of Lady Managers and “ladies of various Columbian clubs” planned the state exhibit hall. The association organized in 1891 with a $100,000 fundraising goal; but by 1893 its estimate of all costs, from constructing the temporary building designed by Mrs. Frank M. Douglas of Little Rock in the French Rococo style — because the state was discovered by the French — and illuminating its fountain of crystals designed by Mrs. P.H. Ellsworth from Hot Springs, and so forth, came to $31,350.

The association asked the state Legislature for $30,000. That would be like asking today for $853,640, according to the online inflation calculator in2013dollars.com. The Senate approved the bill by an unexpectedly large majority Feb. 22.

According to The Arkansas Gazette, the gallery was full of ladies representing the state’s most prominent families on the afternoon of Feb. 28 — when the House nixed Senate Bill 179.

Five parts of the 6-part bill passed on a voice vote. A droll reporter described speeches for and against the sixth part — the money. For instance, J.B. Judkins of Lawrence County reminded Mister Speaker that you couldn’t have a circus without an elephant, no more than you could hold a World’s Fair without the biggest elephant in the lot, Arkansas, being there.

Other legislators spoke in favor of the bill but suggested a smaller appropriation. But R.F. Foster of Cleveland County “denied that the state of Arkansas was wealthy.”

After a voice vote, in which the bill failed to gain the required two-thirds majority, a legislator with a high fever hobbled haltingly in from his sickbed. Statesmen clambered onto their desks to shout salvos of welcome, and the gallery cheered as he begged permission to vote. He voted aye!

Judkins shouted that the speaker should proclaim the bill had passed. But it had not. The ladies were aghast.

A few days later, it was amended to allow $15,000 and passed on a voice vote. To see a picture of Arkansas’ building, go to arkansasonline.com/718fair.

Page 1 of the May 2, 1893, Gazette reports on the opening of that mighty World’s Fair, at which the Ferris Wheel debuted and 27.5 million people walked upon moving sidewalks and sampled Juicy Fruit chewing gum and Shredded Wheat. 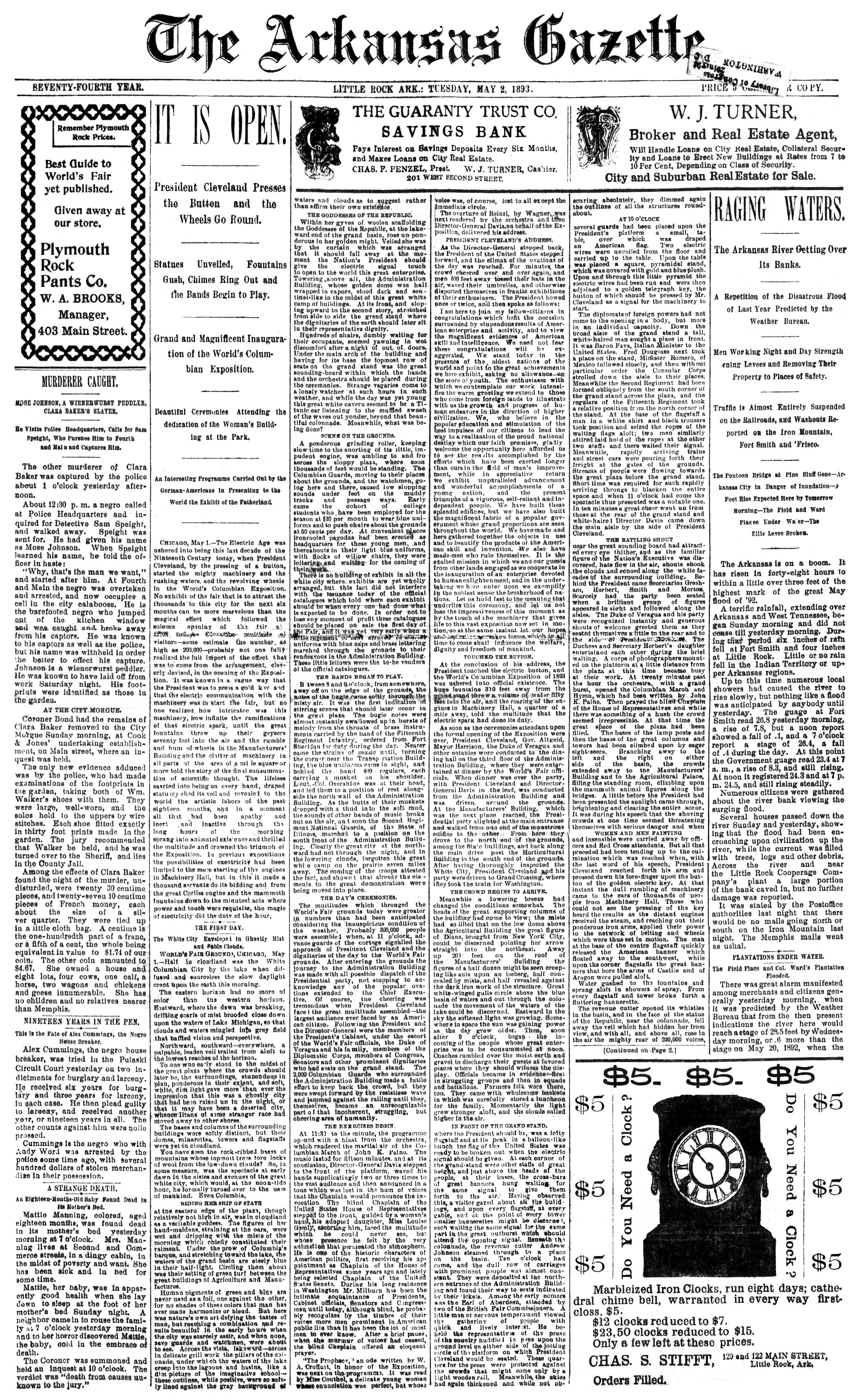