Cherokee Bill, whom The Arkansas Gazette claims in this March 18, 1896, edition to be “the most brutal murderer and famous outlaw of modern times,” was sentenced by U.S. Judge Isaac Parker to death by hanging after being convicted of the murder of Ernest Melton.

Cherokee Bill was born Crawford Goldsby in Fort Concho, Texas, and moved to Fort Gibson in Indian Territory with his mother after his parents separated. When he was 17 years old he attempted to kill Jake Lewis, a man against whom he held a grudge for allegedly embarrassing him in front of a girl he was trying to impress. Lewis lived, but Cherokee Bill fled, believing that he had killed him.

Cherokee Bill earned the first part of his nickname due to his heritage and attending school in Cherokee, Kan.; the latter moniker meant “wild hand” in Indian Territory.

Shortly after he left Fort Gibson, he fell in with the infamous Cook gang, led by Bill and Jim Cook. The gang was broken up when they were forced to abandon Jim after he was critically injured, but not before Cherokee Bill had become notorious as one of the baddest members of the gang. He terrorized indiscriminately, and it was said that Cherokee Bill’s death would allow the citizens of Fort Smith and the Indian Territory to breathe a sigh of relief.

Cherokee Bill and a partner were robbing a store in Lenepah, Indian Territory, when he committed the crime for which he would hang. Melton, a workman who was papering the inside of a building on the same street, looked out a window at the commotion and was killed when one of Cherokee Bill’s bullets hit him in the face.

Though multiple failed attempts were made, Cherokee Bill was finally captured on January 30, 1895, by a deputy marshal named Isaac Rogers, whose house he had often visited in order to see “his girl” who was Rogers’ cousin.

Cherokee Bill was taken to the U.S. Jail in Fort Smith after his arrest. In his attempt to escape in July 1895, he killed Larry Keating, one of the prison guards.

In the weeks leading up to his death, he charged at least one photographer for taking his photo and “only show[ed] himself to jail visitors upon payment of money,” thus enabling him to acquire almost any luxury he wanted.

Page 1 gives the account of Cherokee Bill’s hanging on March 17 in Fort Smith, as well as a brief history of his exploits. He was only 20 years old when he died.

To learn more details of his capture and also how one of Cherokee Bill’s relatives got revenge, go to arkansasonline.com/200/1896bonus. 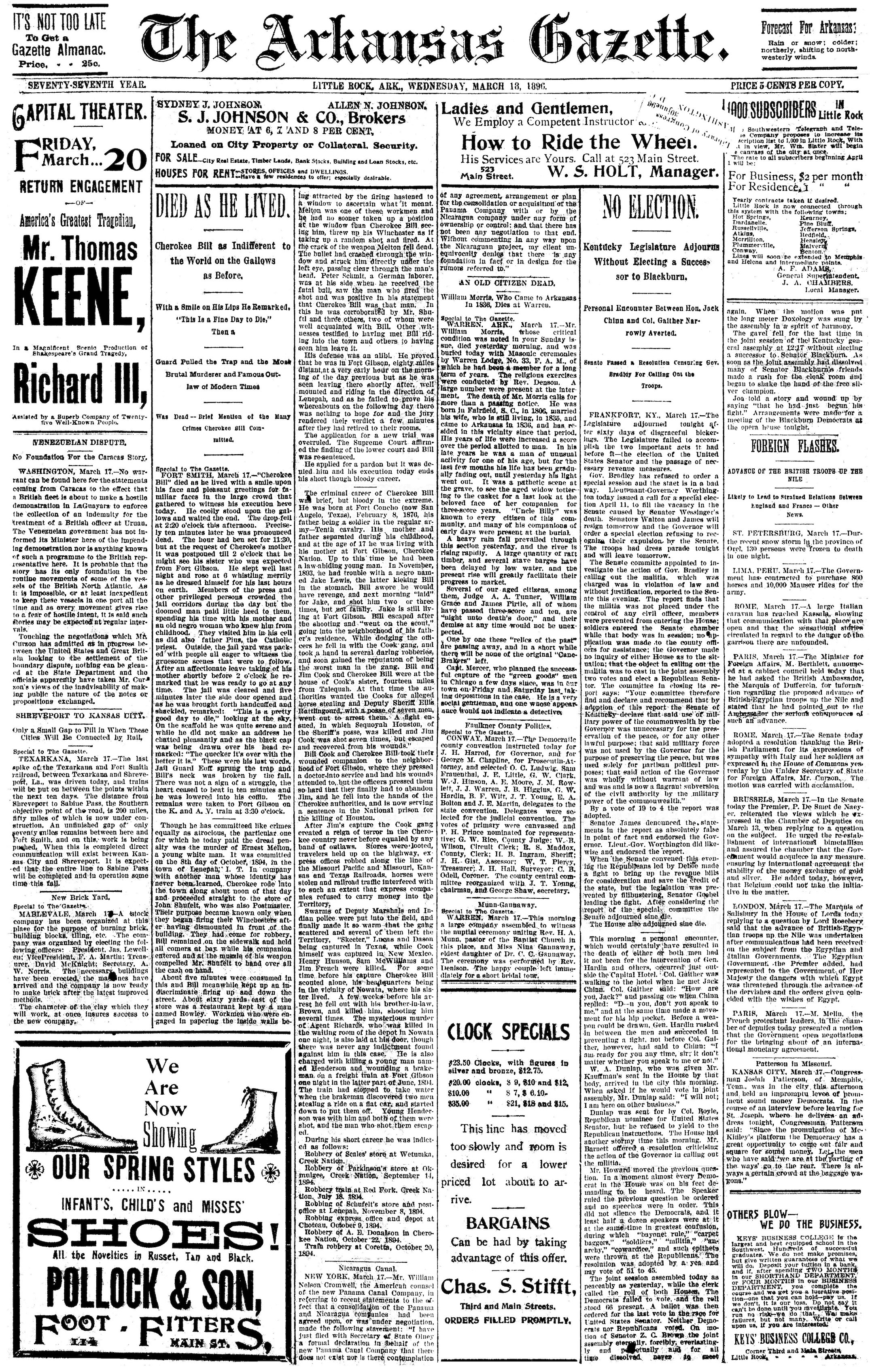