Ground was broken for a new state Capitol building July 4, 1899, on Penitentiary Hill. Six months later on Jan. 18, 1900, The Arkansas Gazette reported the progress made was mostly excavation and the laying of the concrete foundation.

Though the State House (now the Old State House Museum) had been renovated in the 1880s, the building deteriorated to the point that part of the ceiling of the Senate chamber collapsed in January 1899. Some wanted to rebuild on the same site, but it was finally decided that a new building should take the high land occupied by the prison. It was torn down and rebuilt five miles south of Little Rock.

The new Capitol was to be built “by convict labor and not a cent’s taxation can or will be levied for the purpose,” as the Gazette noted Jan. 18, this was per the dictates of the funding bill passed by the Legislature.

The Nov. 28, 1900, front page of the Gazette proclaimed the celebrations held Nov. 27 for the laying of the cornerstone “A Great Day.” The accompanying sketch shows the finished building’s projected aspect, and details of the speeches and festivities fill half the page as well as most of Page 2.

“The largest crowd ever assembled at one place in the state” was present, the Gazette said, with 40,000 visitors to the grounds during the course of the day.

Gov. Daniel W. Jones proclaimed this was “merely a beginning” of the work to be done and that the building could be finished in five years if the incoming Legislature appropriated funding. (In two months he would hand governorship responsibilities, including the building project, to Governor-elect Jeff Davis.)

State Rep. J.D. Kimbell also gave a speech, and his sentiments were perhaps not surprising from the man who introduced the legislation under which the work had been done: “O, then speed the time when, in the morning of the new century, now dawning, the domes and spires of this grand edifice shall rise heavenward to salute, not only the people of our beloved commonwealth, but to greet those of every state and clime passing our borders over the great trunk lines of railway … and may the benign and resplendent rays of the great God of day, as he begins his diurnal course be reflected from the great dome of this structure athwart the happy homes, fields, shops and factories of all Arkansas, till time shall be no more.”

Despite Jones’ optimism and Kimbell’s eloquence, the government wouldn’t move to the still-unfinished Capitol until January 1911, according to the Central Arkansas Library System Encyclopedia of Arkansas. The building, which is still the state Capitol, wouldn’t be “deemed essentially complete” until 1915. 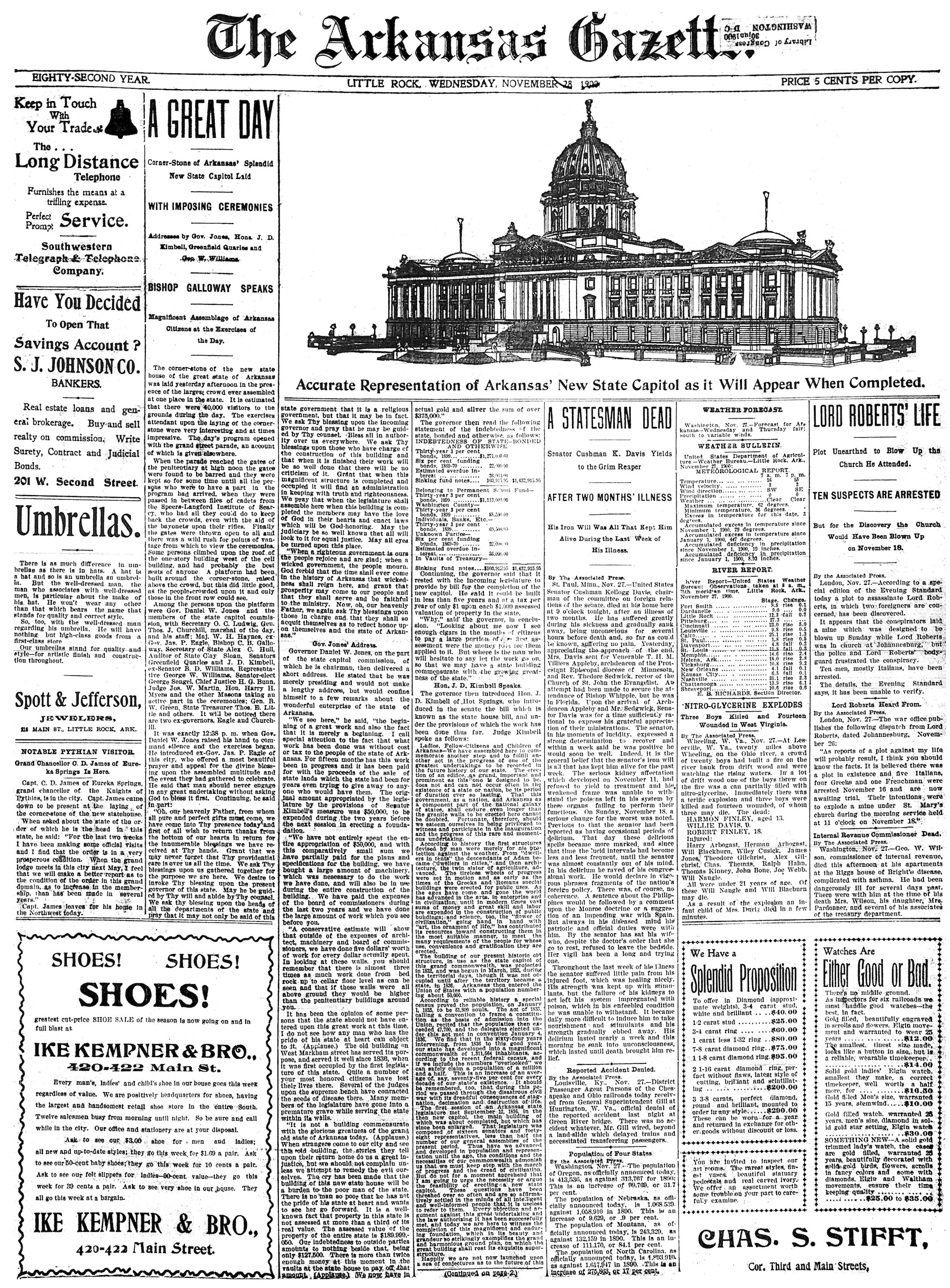