In trying to explain the feud in those years, Gazette accounts first traced it to post-Reconstruction racial conflicts, but subsequent reports tied the feud to a more recent event: the killing of a man named Bob Mullins by Constable H.L. Dearing in September 1902. Mullins was a close friend of the Parnell family, and Marshall Parnell and his sons, Mat, Jim, Tom, Walter, Dan, Ed and John opposed Dearing and his friend City Marshal Guy B. Tucker.

On Oct. 9, 1902, tensions between the two factions erupted in a firefight in front of the courthouse in El Dorado. After the smoke of about 75 gunshots cleared, Walter and Tom Parnell and Dearing were dead; Tucker had been shot six times. Tucker, Mat and Jim Parnell, and Thomas Newton and Dr. R.A. Hilton, both Tucker allies, survived what the Gazette report called a fusillade.

Mat and Jim Parnell were charged with murder and assault, respectively, but were told to leave the state by May 26, 1903, and the charges would be held in abeyance. Tom’s son and family left with them.

But that wasn’t the end of the story. The Aug. 9 Gazette reported that on Aug. 8, the day after a jug of poisoned whisky had been sent to Tucker, he met John Parnell on the street in El Dorado. Tucker later claimed he acted in self-defense, that when he saw Parnell reaching for the gun in his vest he simply beat him to it, shooting and killing him. Tucker immediately ran across the street to the courthouse and gave himself up.

He was confident he would be acquitted, but that verdict wasn’t returned until March 1905, after multiple delays. Marshall Parnell and Pearl, wife of John, wrote a letter to the Gazette published Aug. 21, 1903, saying the shooting was unprovoked; and they wanted justice to be done.

Shortly after the shooting, Tucker left El Dorado, worried about the safety of his friends and hoping to take all of the trouble with him. He worked as a foreman at the new Capitol building in Little Rock. But tensions remained high in Union County, and subsequent deaths there would be linked to the feud.

The Central Arkansas Library System Encyclopedia of Arkansas notes that former Gov. Jim Guy Tucker, grandson of Guy Tucker, and Blanche Parnell Ward, a daughter of Walter Parnell who became a philanthropist, had an amicable meeting when Tucker visited El Dorado in 1993 as governor.

The October 1902 shootout is commemorated in a re-enactment each summer in El Dorado. 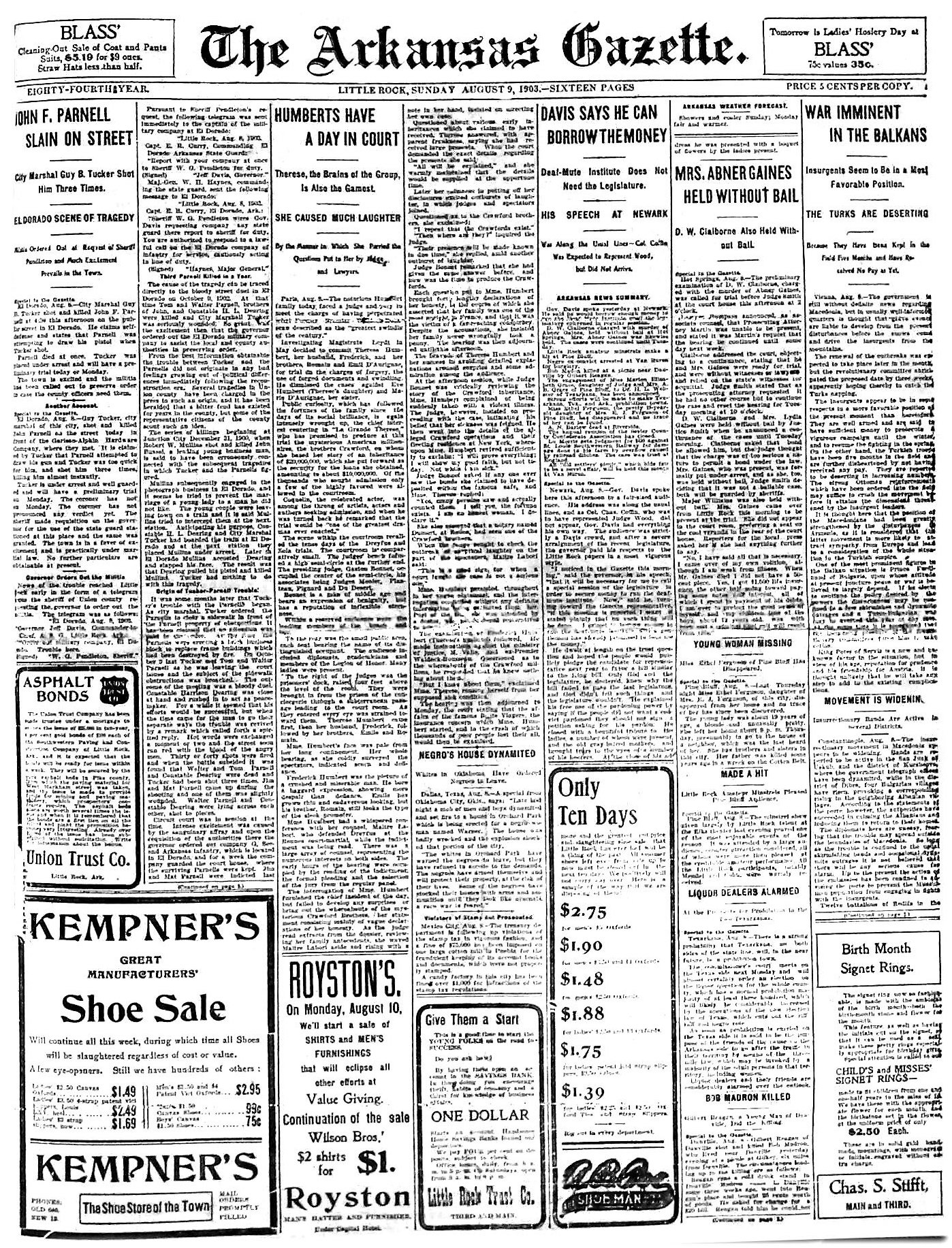