Arkansas was not always famous for its diamonds. First, someone had to find them. That someone was John Wesley Huddleston (1862-1941), farmer and amateur prospector. He spotted two lustrous white stones among dirt and pebbles on land he owned in Pike County, which happened to include an ancient volcanic formation.

As The Arkansas Gazette reported Sept. 21, 1906, on Page 1, Huddleston took the stones to Little Rock jeweller Charles S. Stifft. After a few tests, Stifft sent them to New York, where four experts agreed they were gem-quality, blue-white diamonds. The Gazette reported that one weighed 2⅝ carats and the other 1⅜ carats.

Geologists had known about this unusual land near Murfreesboro since the 1840s. According to a biography of Huddleston by Dean Banks (see pcahs.org), geologist John C. Branner surveyed and mapped Pike County’s eroded igneous intrusion in 1888. Recognizing the structure as similar to the famous diamond “pipes” of South Africa, Branner spent fruitless hours crawling about, picking up gravel and putting it down.

Legends about “Diamond John” Huddleston depict him as a clever pig farmer who watched Branner on his knees and returned later with more success. Supposedly the wily farmer kept his find a secret until he’d bought the land, dirt-cheap. But Dean writes that Huddleston and his wife, Sarah, habitually bought and sold land to supplement their farm income. They chose their 243-acre, diamond-bearing tract because it was accessed by the best gravel road in the county, was an outdoorsman’s ideal and suitable for running hogs and grazing horses. And they could afford it.

Rumors of gold strikes were common in the forest, though, and the land held some curiously greenish and reddish dirt. Huddleston was looking for ores when he spotted his gems.

Stifft, his son-in-law Albert Cohn and Samuel W. Reyburn of Little Rock formed a company to buy 360 acres. With more than $36,000 from the sale, the Huddlestons moved to Arkadelphia. Years later, after tragedies and Sarah’s death, John remarried and returned to Murfreesboro. Before he divorced her, his young wife exhausted his money. He continued his land speculations and also sold junk until he died at home in 1941.

As a soil survey by the U.S. Department of Agriculture’s Natural Resources Conservation Services puts it, after a turbulent history of mining and tourism enterprises, in 1969, the diamond field and adjoining land were bought by GI Industries of Dallas. That company in turn sold the property to the state, which in 1972 created Crater of Diamonds State Park. 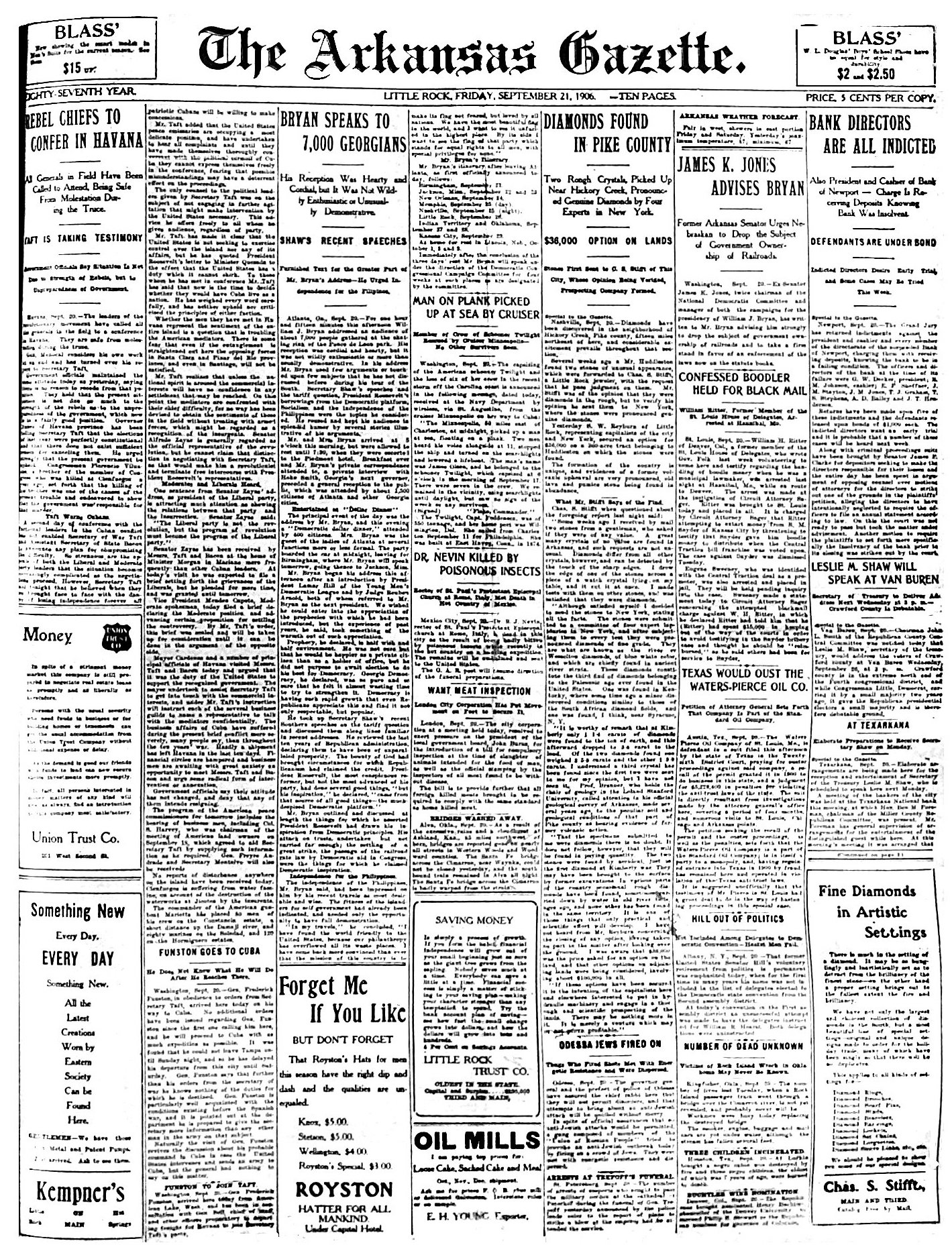