In 1914, young Serbians dreamed of escaping the Austro-Hungarian Empire, a constitutional monarchy that dominated large parts of central Europe. They wanted to unite with Herzegovina to create a greater Serbia. That June in Sarajevo, a Bosnian Serb assassinated the heir to the Austro-Hungarian throne, Archduke Ferdinand, and his wife, Sophie.

Austria-Hungary rejected Serbian apologies. One month later, it declared war on Serbia, and this toppled the first in a series of domino-line alliances, public and secret, precipitating the bloody conflict known at first as the Great War.

Austria-Hungary was allied with Germany, and so Germany began to mobilize its armies, in case it needed to defend Austria-Hungary against Serbia’s big ally: Russia. The Netherlands declared its neutrality.

Diplomacy between Germany and Russia, conducted via telegram between the German Kaiser Wilhelm II and the Russian Czar Nicholas II, did not go well. In a rapid escalation of events Aug. 1, Germany declared war on Russia and signed a secret pact with the Ottoman Empire. France mobilized. Italy, Denmark, Sweden and Norway declared their neutrality.

As this Aug. 2, 1914, Arkansas Gazette was going to press, Germany invaded Luxembourg. Readers that morning found on this Page 1 predictions as well as confirmation of war.

Meanwhile, the United States and Spain said they were neutral.

Although a tiny part of Arkansas’ population, German immigrants had founded communities in the Grand Prairie and at Jonesboro and Paragould. German ethnic Catholic and Lutheran parishes at Fort Smith and Little Rock celebrated an annual German Day. According to the Central Arkansas Library System Encyclopedia of Arkansas, some parochial schools did all their instruction in the German language. The St. Joseph Society was a benevolent force; German Arkansans had vineyards; the German National Bank was a financial pillar; German names graced retailers; and German-name beers from St. Louis were popular with drinkers.

At first, Europe was very far away. 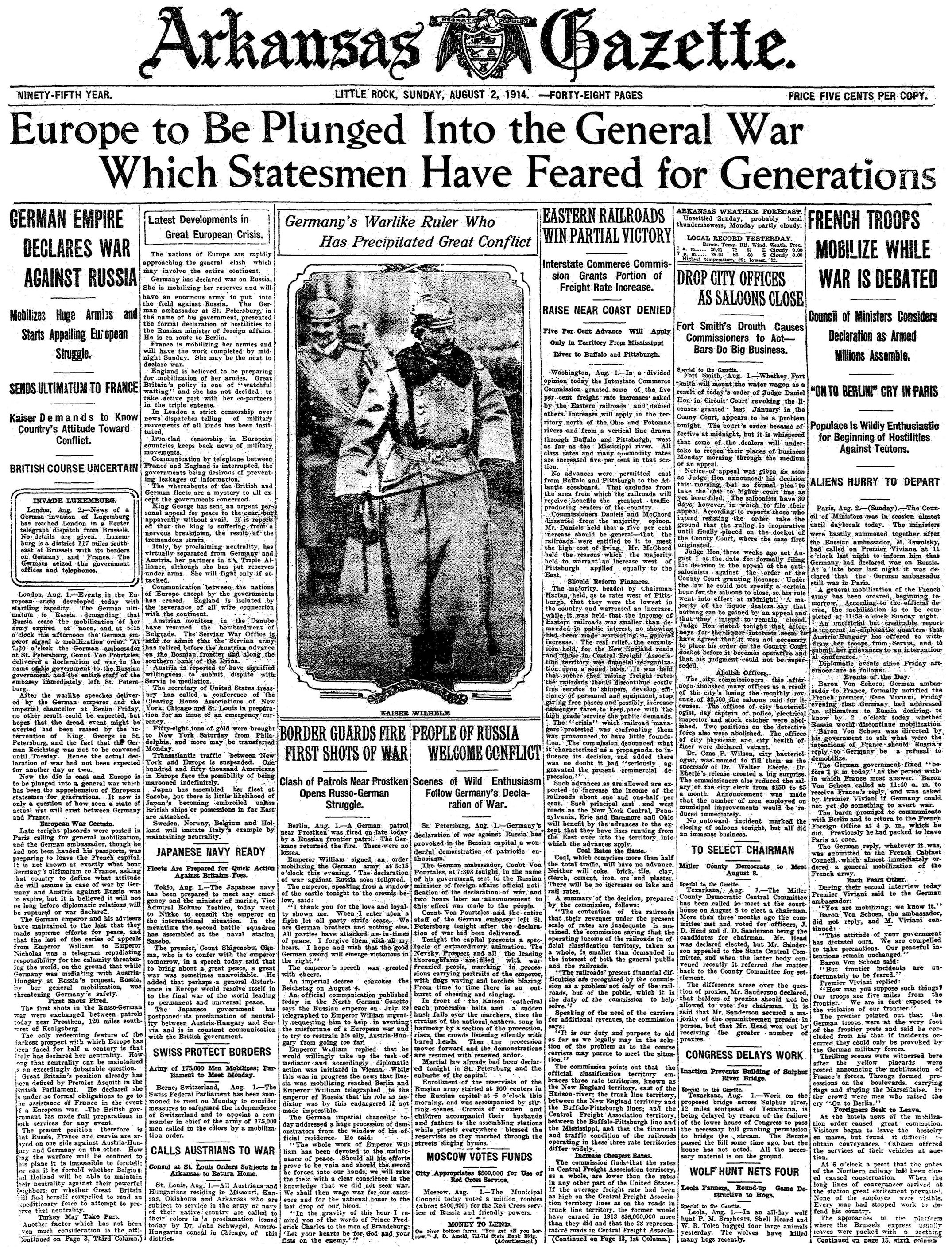