The 18th Amendment to the U.S. Constitution took effect Jan. 16, 1920, enforced under the Volstead Act, and the Arkansas Gazette boxed the nation’s new alcohol rules at the bottom of Page 1.

The onset of federal Prohibition was anticlimactic for Arkansas.

In his columns for the Arkansas Democrat-Gazette, historian Tom Dillard has described alcoholism as widespread and a terrible problem for much of the state’s early history. An Arkansas Post commandant in 1777 described resident hunters as “a bunch of professional drunks.” But church-based temperance activists began making inroads in the 1880s, and in 1885, the state banned alcohol sales on Sunday.

By 1913, saloons were regulated, and the majority of a county’s white residents had to sign a petition in favor of any new saloon before it was granted a liquor license. By 1914, “drys” and “prohis” — urged on by women who saw the downsides of alcohol — had made licensing so onerous that saloons operated legally in only nine counties.

And then the Newberry Act put every licensed saloon in Arkansas out of business at midnight Dec. 31, 1915. The act did not even exempt medicinal alcohol; but it also didn’t forbid importing alcohol for personal use.

In 1916, “wets” forced a referendum on restoring liquor sales, but voters rejected it by a wide margin — thanks to an unusual coalition of Christians: black ministers and the Ku Klux Klan.

In 1917, the state “bone dry” law outlawed importation. After Congress passed the 18th Amendment (introduced in the Senate by Texas Sen. Morris Sheppard) Arkansas was the 25th state to ratify, in January 1919.

Throughout those years, the Gazette’s editorial columns generally took a sober tack, but its reporters and headline writers lavished wry creativity on the arrests of drunks and the wiles of bootleggers: “Moral — Never Buy Liquor in the Dark”; “Has Found the Fishing Pretty Good in Searcy”; “20 Gallons of ‘White Mule’ is Rudely Seized.” Destruction of confiscated whiskey was often described as an “execution” or a “funeral.”

In July 1919, a judge in Hot Springs ruled that it was not against the law to steal whiskey. The Gazette headline: “It’s O.K. to Steal Your Friend’s Booze If Y’wanta.”

Frequent news stories about arrests and raids suggest that despite the laws, parts of Arkansas were “moist” if not “damp.” Dillard has written that “bootlegging thrived throughout the state, not just in the Ozarks as popularly assumed. A Poinsett County judge remarked in 1918 that bootleggers ‘are so thick they have to tag one another to prevent the fraternity from soliciting among its own membership.’” 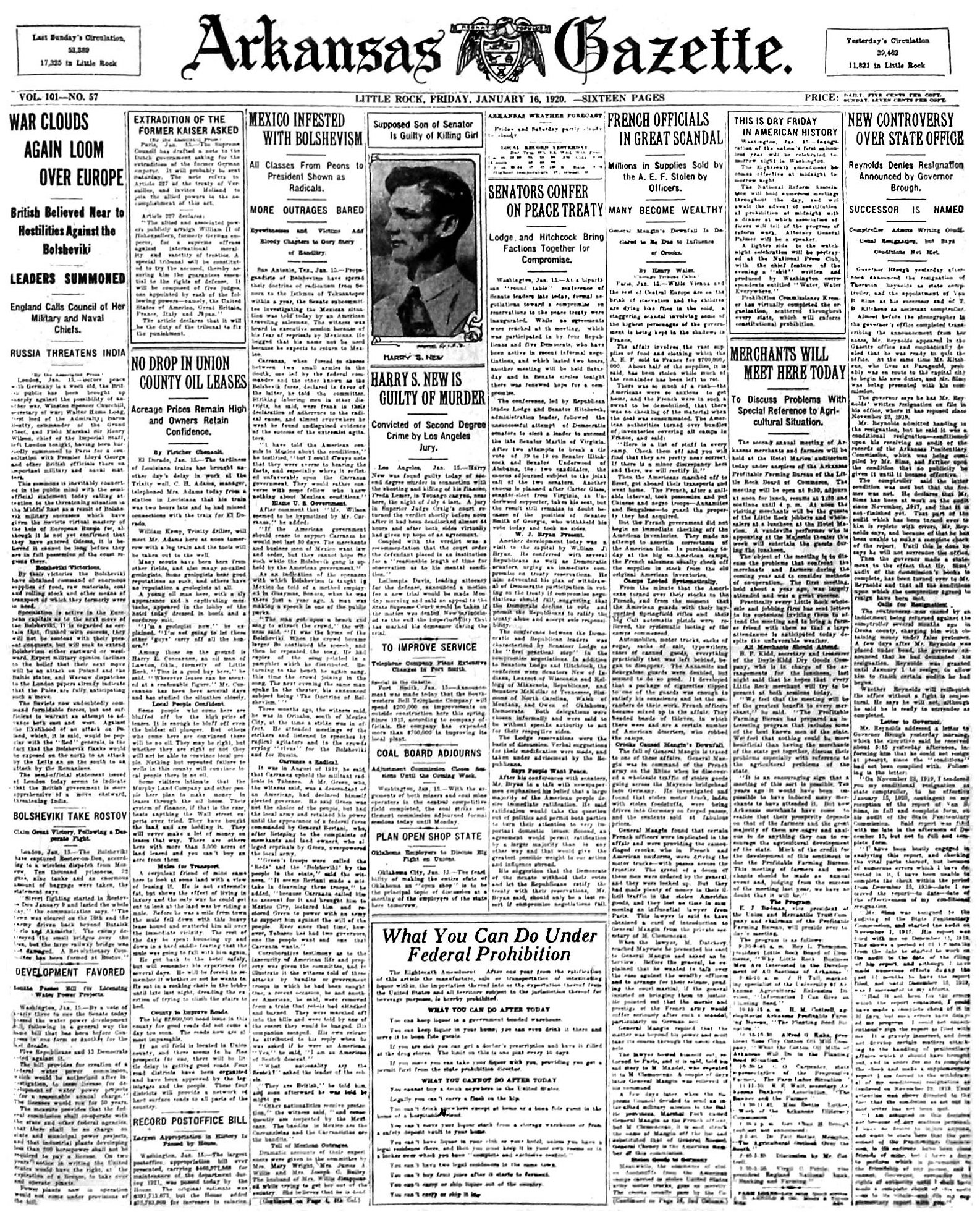