The front page of the Arkansas Gazette’s Jan. 11, 1921, edition made quite a splash with the news that Arkansas had finally struck oil — a whole lot of oil.

One mile west of El Dorado, Busey-Daniels well No. 1 “blew in as an oil gusher” on the afternoon of Jan. 10, and the Gazettereported that “the long sought greasy black fluid is saturating the adjacent country and is accumulating in little lakes that are rising steadily and are defying all efforts to dam them,” or, as telegrams received in Little Rock described it, the black gold was “running wild about the country.”

Earlier discoveries and modest oil production at Samuel S. Hunter’s No. 1 well in Ouachita County and oil and natural gas produced by Constantin Oil and Refining Co.’s Hill No. 1 well near El Dorado were dwarfed by the Busey-Daniels well, which spewed 3,000-10,000 barrels up to a mile away, according to the Central Arkansas Library System Encyclopedia of Arkansas.

The Gazette told readers that the new gusher was owned by Dr. Samuel T. Busey, a “globetrotting physician and oil speculator,” and oil drilling expert Chal Daniels, who had recently assumed responsibility for the well’s operations. The Gazette repeated the story of Busey’s arrival in El Dorado during the boom time caused by the Constantin well when there wasn’t a single room available for lodging in the city. Not deterred in the least, the doctor simply bought the Arcade hotel, in which he and his wife then made their home.

The state Legislature booked a train from Little Rock to see the oil flowing in El Dorado, and workers from Louisiana’s Homer field wasted no time in coming by the carload. Their assertion that the new Arkansas well was producing “more oil than any well in the Homer field ever yielded” was reportedly substantiated by one Mr. Josey, “a field expert employed by the Standard Oil Company” who also came to see the spectacle.

El Dorado was nearly frantic at the discovery: “The city is wild with delight and greasy with oil. Practically everyone in the city has visited the well at least once and all have brought back samples in bottles and on their clothing.”

On Jan. 16, the Gazette editorial page asserted that “the extent of the field is yet to be determined, but the big gusher brought in last Monday answers the doubting Thomases as well as those individuals that have sought for their own purposes deliberately to run down and belittle the prospects” of Arkansas’ oil industry.

The editor also expressed the hope that oil would balance the state’s economy, especially in years when “the bottom drops out of cotton.” 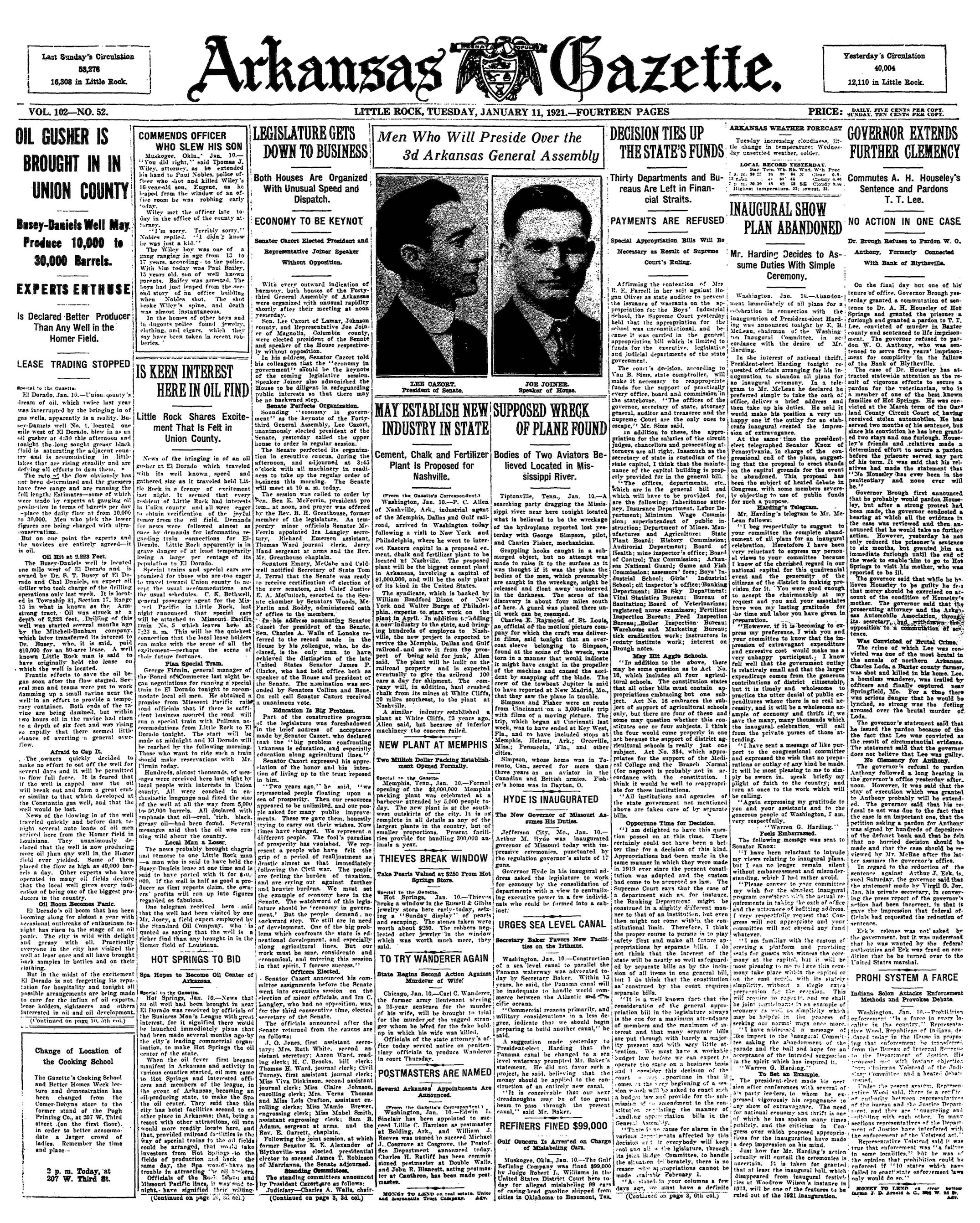