After oil was discovered near Smackover in July 1922, the area experienced growing pains as its population swelled from 90 residents to 25,000 in just six months. Some residents thought the accompanying growth of saloons, gambling and prostitution was out of control, leading to events that would become known as the Smackover Riot.

The Central Arkansas Library System Encyclopedia of Arkansas notes that Smackover was so lawless that none of the 25 people who petitioned for the city’s incorporation were willing to hold office.

Page 1 of the Nov. 29, 1922, Arkansas Gazette reported that, on the afternoon of Nov. 27, robed and masked oil workers and residents who had organized themselves into the “town Vigilance Committee” put the unwanted proprietors on notice by walking through town brandishing signs, one of which reportedly warned “gamblers, crooks, and painted women to leave town inside of 24 hours.”

The Gazette’s headline called the committee’s members “Kluxers,” and the story described their robes as similar to those of the Ku Klux Klan.

On the night of Tuesday, Nov. 28, about 200 members of the Vigilance Committee set about cleaning up the town. The Gazette reported that their methods were tarring and feathering, shooting into the air and flogging. There was an altercation that lasted late into the night between the vigilantes and 25 oil workers two miles north of Smackover.

As details became known over ensuing days, the Gazette reported that vigilantes had killed a man by shooting him in the back 12 times Nov. 28 as he was running away from being flogged. The victim, E.J. Wood, was co-owner of a gambling house. His monikers included “Johnny Few Clothes” and “Fenrose.” The vigilantes also tore down a building.

Klan leaders in the area said the Klan was not involved. J.B. Newton, who had recently been elected sheriff of Ouachita County, said the reports of the “raids which were conducted by the better element in the county” had been exaggerated.

But on Dec. 1, the Gazette reported that more than 1,000 people had left the oil fields via the Camden railway station since the night of Nov. 28. There were more raids Nov. 29, but by the time Ouachita County deputies arrived the raids were over and the vigilantes had disappeared. The deputies received reports of several people being tarred and feathered and others flogged, and buildings had been chopped down.

Deputies visited the oil fields again after the “men and women of the under world” began leaving and found that all was quiet.

No arrests were made. The inquest into Wood’s murder found that he died at the hands of parties unknown. 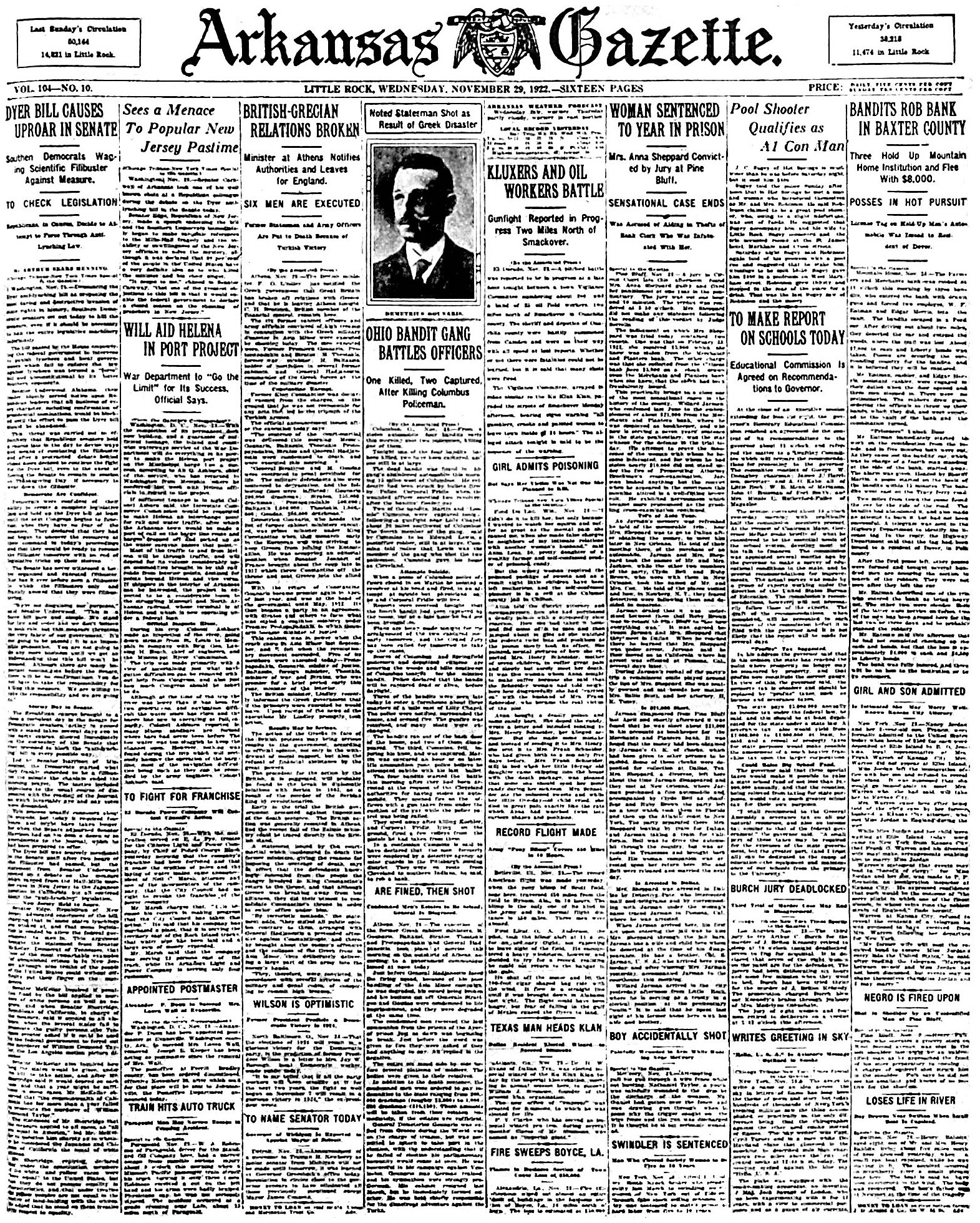