The Arkansas Gazette published more than 200 items about the Scopes Monkey Trail in 1925 — 80 before the trial began July 10. The first item, “Test of Evolution Law Is Assured,” appeared May 7 on Page 8 under a photo of a “Widely Known Eureka Springs Couple Separated by Death” and beside “Child Drowns in Bucket of Water.”

In tiny Dayton, Tenn., a 24-year-old football coach substituting for a science teacher had brought a textbook used throughout Tennessee — Civic Biology: Presented in Problems — and taught from its section on human evolution. Early news reports explained that John T. Scopes had volunteered to do this at the behest of local businessmen and the 5-year-old American Civil Liberties Union.

Five male students at Rhea County High School obligingly accused him of violating Tennessee’s newly enacted Butler Act, which banned the teaching in public schools of “any theory that denies the story of Divine Creation of man as taught in the Bible, and to teach instead that man has descended from a lower order of animals.” The law did allow lessons on the evolution of plants and other animals.

As reported in the Gazette, the businessman who recruited Scopes also swore out the warrant for his arrest and was subsequently lionized by supporters of the law he hoped to see declared unconstitutional.

The story moved to Page 1 when Scopes pleaded “not guilty” at a preliminary hearing May 9. On May 20, the Gazette reported that other teachers in Chattanooga, Tenn., had lined up to have themselves arrested, too, hoping to beat Dayton to the punch in hosting what was expected to be a sensational trial. And it was.

Page 1 of the July 21, 1925, Gazette reported dramatic developments in the trial’s seventh day when court adjourned early so Darrow and Bryan could hold a debate on the courthouse lawn, on a platform built below two spreading maple trees. The crowd “howled with delight” while Darrow grilled Bryan about the literal accuracy of Bible stories and Bryan defended his faith.

As the reporter put it, “All semblance of legal procedure in the case was swept away.”

July 21, in his closing argument, Darrow asked the jury to find his client guilty. Scopes was, and the fine was $100, but the verdict was overturned on a technicality. The case did not advance up the chain of appeals to the U.S. Supreme Court. 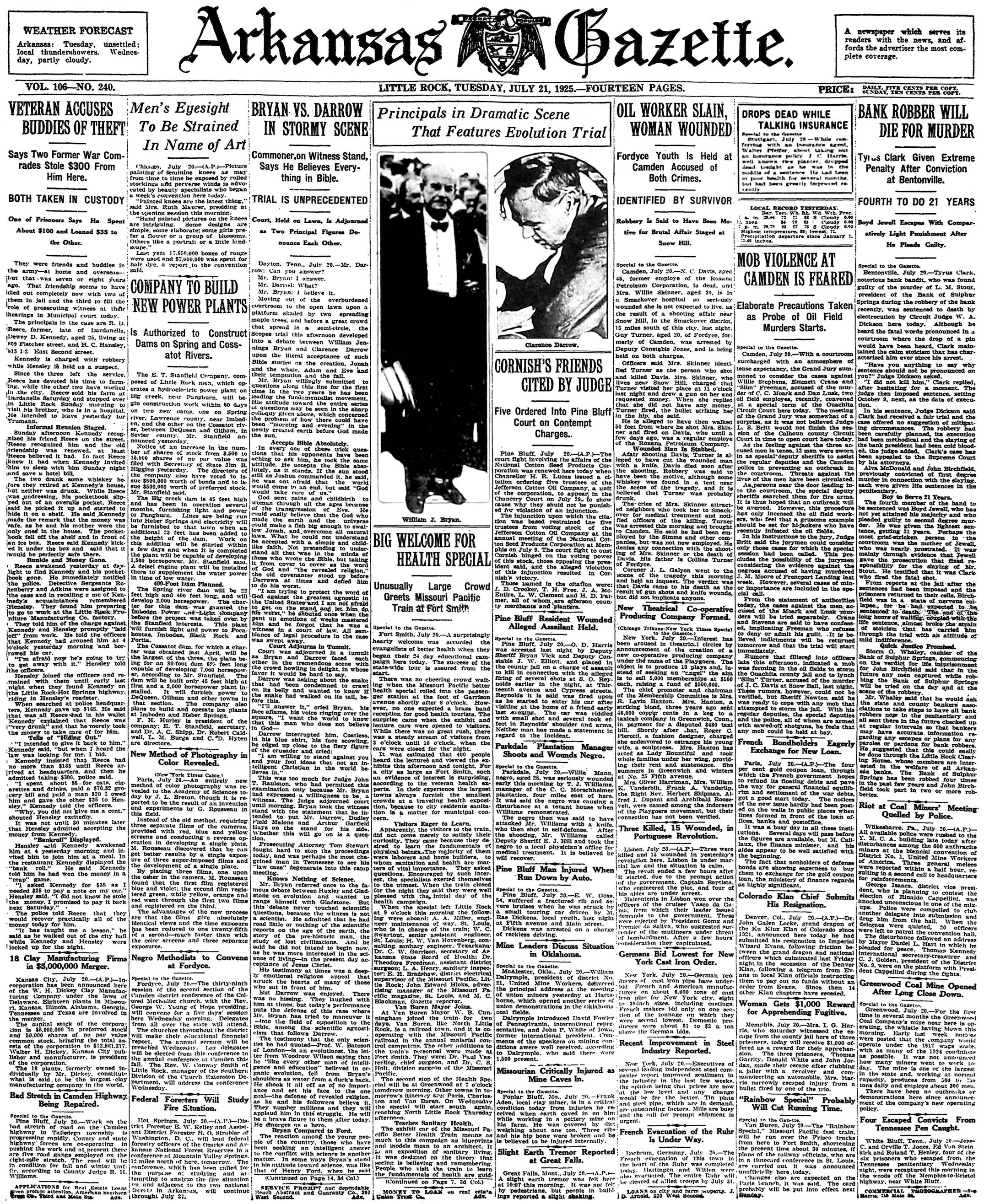