The Great Flood of 1927 was a 153-day inundation that devastated the Mississippi River states and most especially Arkansas. In April, during the catastrophic onset, two white children disappeared in Little Rock.

First, 13-year-old Lonnie White vanished from his home, which backed up to the rising Arkansas River. He wore knee pants, a white blouse, a white sailor’s hat. That night, tornadoes swept three states, killing 125 in Texas and two at Fort Smith.

It was still raining the next day, April 12, when 11-year-old Floella McDonald failed to come home from the library with her checked copy of Mrs. Wiggs of the Cabbage Patch. Another storm swept the city that night.

Police Chief Burl C. Rotenberry speculated that “a fiend” had the kids. Telegrams and radio spread their descriptions across the South; search parties chased rumors; more than $1,000 poured into reward funds. Roads were flooding, so a patrolman took an airplane up to drop 1,000 circulars as far west as Perry.

In a massive wave April 17, the swollen Arkansas crested at Little Rock, having over-topped every levee on its way. The searchers gave up.

Three weeks later — with half the state underwater, 100 people dead or missing, 350,000 displaced — a black man, Frank Dixon, janitor of First Presbyterian Church at 123 E. Eighth St., climbed to the belfry to check out an odor.

Floella was identified by her clothes.

In an essay in Bullets and Fire: Lynching and Authority in Arkansas, 1840-1950, Stephanie Harp explains that contemporary reports about the events that followed differ so dramatically that serious questions remain. But this much is known:

Dixon’s teenage son, who coincidentally was also named Lonnie, was indicted for rape and murder. Over two nights, white mobs invaded city jails, looking for him. The mayor assured the city he would die, and calm descended — for one night.

On the morning of May 4, word spread that a white woman and her daughter were “accosted” by a black man seven miles outside town. A posse caught a man named John Carter and put him into a car. A mob gathered as someone fetched the injured woman’s daughter. She said, “That’s the man, that’s the man.”

The mob led Carter to a telephone pole, where he prayed and then was hanged and shot 200-300 times.

The coroner came and then left. A parade of cars dragged the body into and around downtown — past City Hall and police headquarters — to Ninth Street and Broadway. The body was doused in gasoline and set ablaze there. A mob of men, women and children with “thousands of weapons” fed the fire with furniture from black-owned businesses and the AME Church.

A white teen was shot in the leg; a black man was beaten and almost added to the pyre. After three hours, the National Guard arrived to send everyone home.

May 5, a boxed editorial appeared atop this Page 1 of the Arkansas Gazette. It denounced the “shame” the city had suffered because peace officers “have failed us.” As did the headlines around it, the editorial presumed the mob’s victim — John Carter — was guilty.

May 8, Lonnie White’s drowned body was recovered from the river.

On June 24, his 17th or 18th birthday, Lonnie Dixon died in the electric chair. 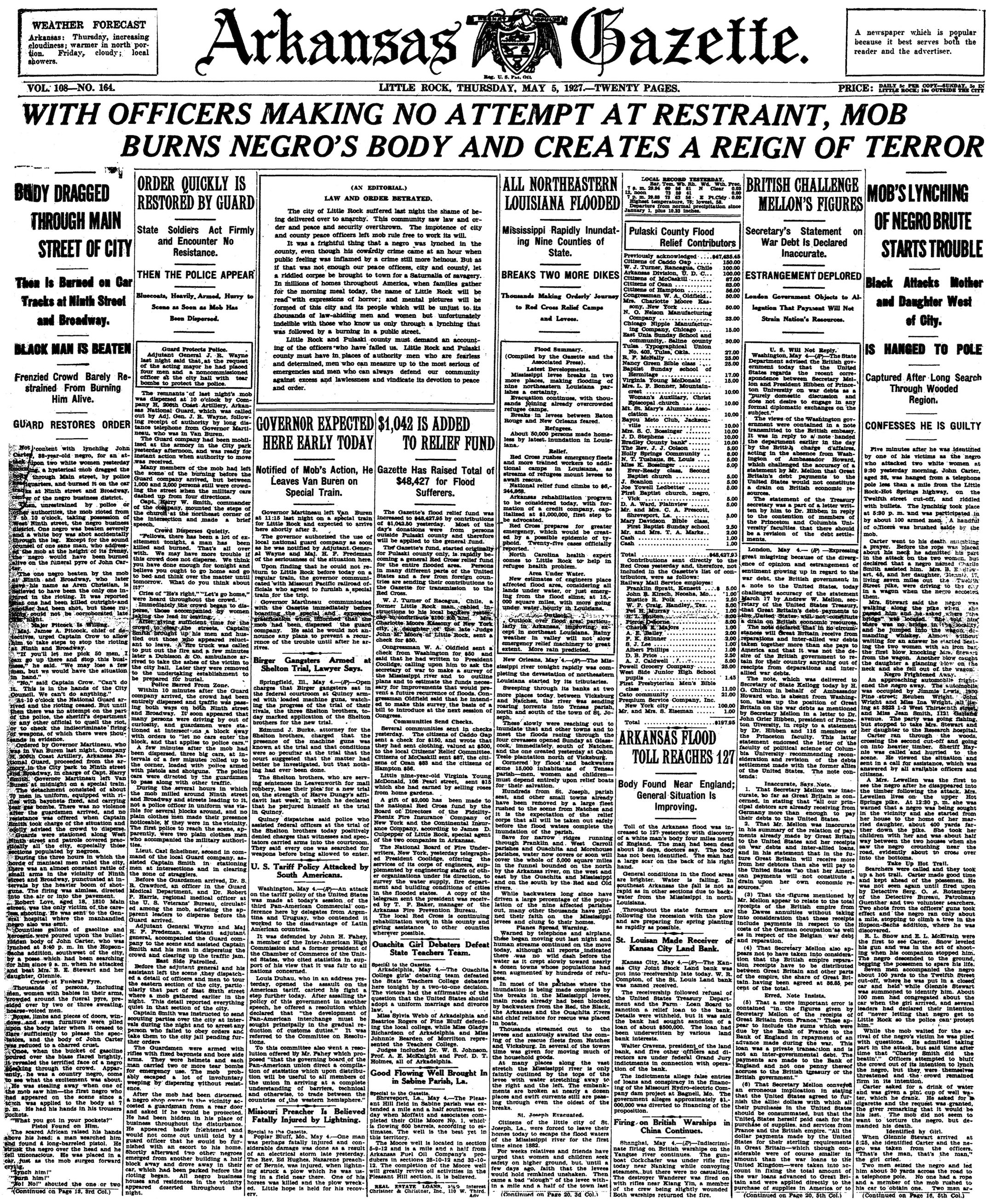