On Oct 30, 1929, subscribers of the Arkansas Gazette woke to this Page 1 and its troubling news that New York stock exchanges had suffered the worst declines — ever — the day before. Bankers’ attempts to stop an unprecedented sell-off of more than 16 million shares had largely failed. Thousands of investors who had taken advantage of a newfangled practice of buying stocks on margin — using a loan from the seller — were ruined.

This “Black Tuesday” was the culmination of four days of tempestuous selling and heroic efforts to prop things up that began Oct. 24, aka “Black Thursday.” A series of massive drops and small rallies built to the all-out panic of Oct. 29. Historians use this date to mark the start of the Great Depression.

Atop the front page is a small item that helps to explain a myth, still widely believed, that market panic triggered a wave of self-defenestration — suicides jumping out the windows of brokerage buildings. Albert Schneider, 60, president of the Union Tobacco Co., fell to his death from the sixth floor of the Hotel Beverly on a day when his company’s stock hit $1 per share. It had been selling for $20 a share, down from $133 months before.

In The Great Crash, 1929, historian John Kenneth Galbraith writes that there was no wave of suicides. In fact, there were fewer suicides in the city than usual that month and that year. “One can only guess how the suicide myth became established,” Galbraith writes. “Like alcoholics and gamblers, broken speculators are supposed to have a propensity for self-destruction. … Suicides that in other times would have evoked the question, ‘Why do you suppose he did it?’ now had the motive assigned automatically: ‘The poor fellow was caught in the crash.’’’

The wire service story carried by the Gazette indicates that police doubted Schneider fell accidentally. But witnesses insisted he had, including the waiter who had grabbed the tobacco executive’s foot as he went out the window. Louis Morell said his brief struggle to pull Schneider inside ended when a shoestring broke and the shoe came off in the waiter’s hand.

While “the wolves ranged through Wall Street,” Congress debated tariff legislation. This Page 1 also reports a lively bit of testimony before the Lobby Commission presided over by Arkansas’ Sen. Thaddeus Caraway. Joseph Grundy, Republican fundraiser and advocate of high tariffs, declared that small states like Arkansas and Idaho should not be allowed to vote on any pending tariff legislation. Readers were treated to an example of their senator’s famous sarcasm in reply. 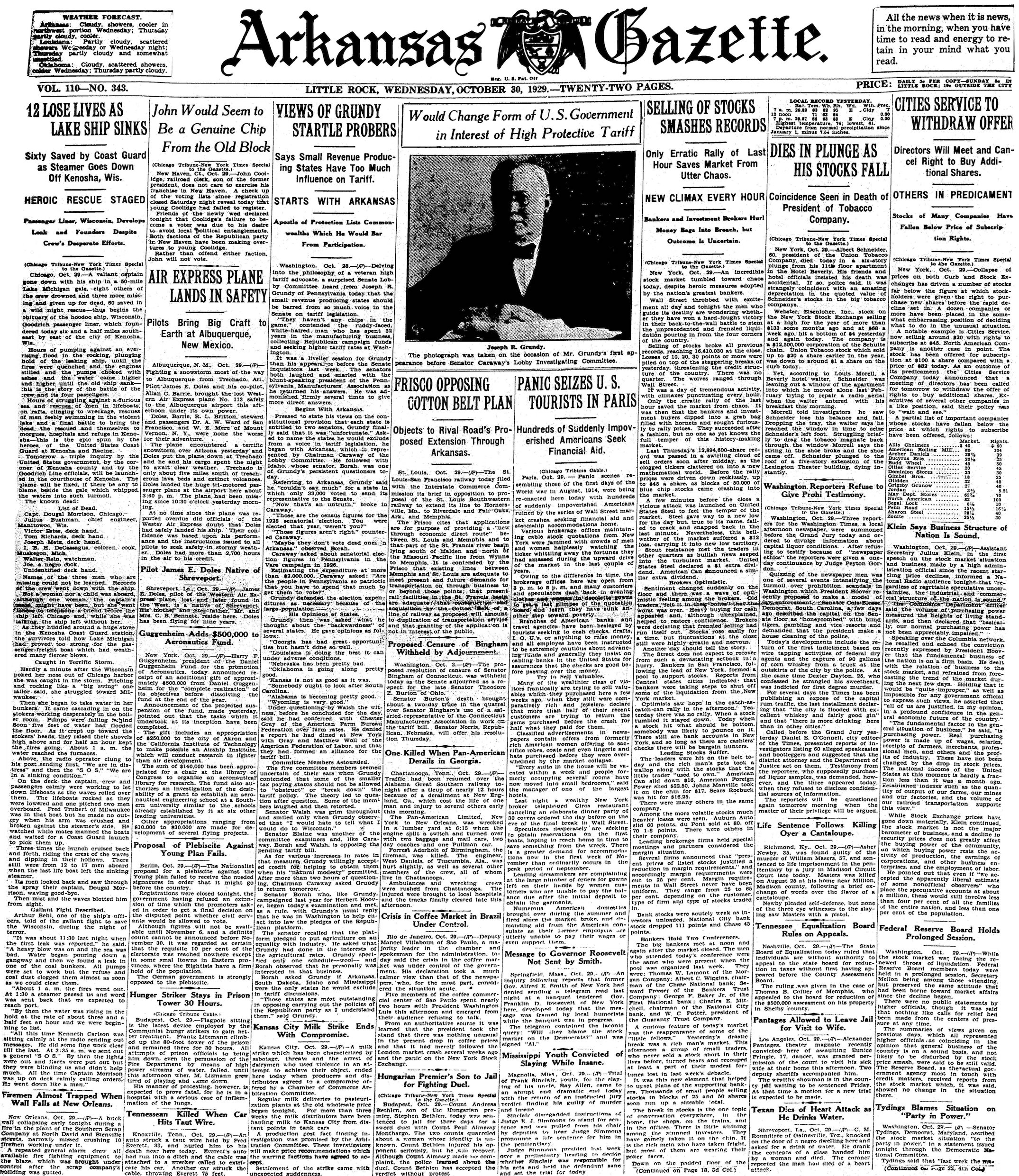