Col. Charles A. Lindbergh was an American aviator who became known around the world in 1927 as “Lucky Lindy” by winning a contest to fly solo nonstop from New York to Paris. He and his wife, Anne, famously made their home in the Sourland hill country near Hopewell, N.J.

He was still making headlines in June 1930, and the birth of their firstborn, Charles A. Lindbergh Jr., was one of more than 200 stories that year in the Arkansas Gazette mentioning the colonel.

When the baby was stolen from his crib March 1, 1932, Lindbergh blamed the fame.

The kidnappers ascended a ladder to access the second-story nursery. They left a ransom note and muddy footprints.

As tips, sympathy, false leads and advice poured in from all over the world, two months were spent following a trail of notes from purported kidnappers. One newspaper report stated that Lindbergh had received 14 total. A $50,000 ransom was negotiated and paid, and in return, the anxious parents were told the baby would be found near Martha’s Vineyard in Massachusetts on a boat christened “Nellie.” That was the lead the colonel reportedly was chasing when little Charles’ body was found in a shallow grave May 12, just five miles from home and 75 feet from where workmen had installed wires to facilitate communication about the missing boy.

On May 13, the tragic development was inked across the Gazette’s front page: the Lindbergh baby had been murdered. The Gazette reported that the baby had very likely died from head trauma on the night he was taken.

The Gazette’s May 14 editorial page demanded that “something more substantial and permanent than universal grief for the dead child and the sorrowing parents should come from it all. If American laxity in dealing with crime … if conditions that have been suffered to develop in our country are in any way responsible for this appalling thing, the fault is in some degree with all of us. … Out of a national sorrow and national humiliation should come a new consecration in citizenship.”

The Federal Kidnapping Act, subsequently known as the “little Lindbergh law,” was almost immediately proposed in Congress and passed the same year.

Writing in the North American Review in 1934, P.W. Wilson argued that “the mind of this nation was not only shocked; it was changed,” with one of the pieces of evidence of this being “the movement against Prohibition was intensified. Laws, however good, so it was recognized, can not be healthy unless they are enforced.”

In 1934, police arrested Bruno Richard Hauptmann, a German immigrant. Handwriting analysis of ransom notes, examination of the ladder used in the kidnapping and recognition by witnesses involved in ransom note exchanges contributed to Hauptmann’s conviction of murder in December 1935. He died in the electric chair in March 1936.

When their second son was born in August 1932, the Lindberghs didn’t publish a birth announcement, and no details were given of the baby’s weight or appearance. 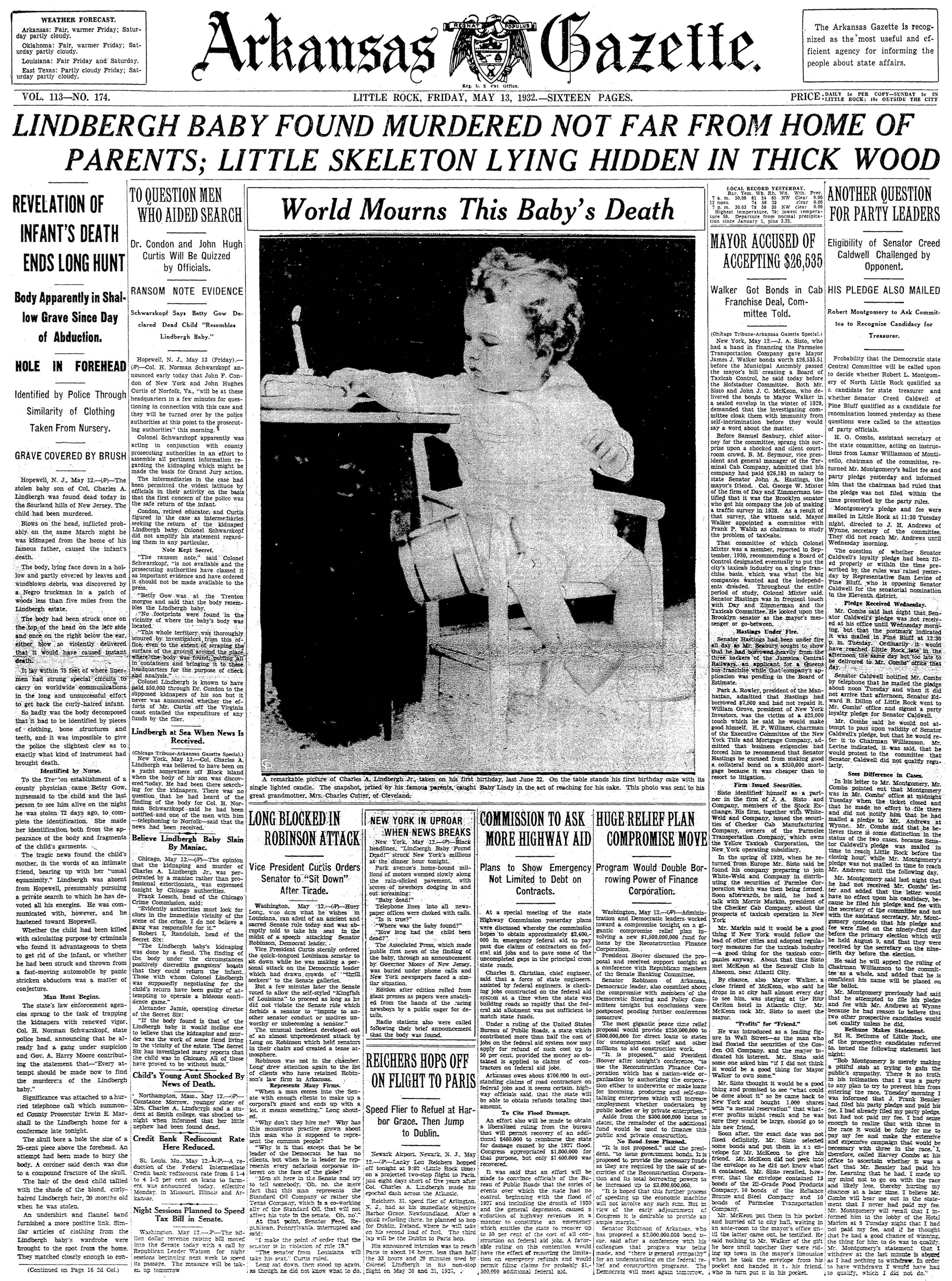