The inauguration of Franklin D. Roosevelt signaled a new hope for a troubled nation, and Arkansans joined in looking forward to better times.

The Sunday, March 5, 1933, front page of the Arkansas Gazette chronicled everything from Roosevelt’s inauguration to the nationwide “bank holiday” that included Arkansas, Japan’s latest conquests in China and the state Legislature’s consideration of extending its regular session to actually get something done despite an obstinate House filibusterer blocking action on highway bonds.

Famously declaring his “firm belief that the only thing we have to fear is fear itself,” Roosevelt, who had defeated incumbent Herbert Hoover, sought to both calm and energize Americans caught in the throes of the Great Depression as he pondered quick action to get the economy back on its feet.

One of the front-page headlines said “31st President Takes Oath,” but it was sadly wrong, as FDR had become the 32nd chief executive.

While inaugural festivities swirled in Washington, the new president’s Cabinet was quickly sworn in, and they huddled with FDR into the night. “Drastic action looms,” another Gazette headline stated. The fruits of that meeting would ripen into a strong recovery.

Arkansans appeared to be taking the two-day bank closures in stride. The Gazette noted that most bank lobbies in Little Rock were filled with customers when the order to close was announced Saturday around 11 a.m., and they showed little reaction as they were quickly cleared from the institutions. Extra policemen were stationed outside until late afternoon, then withdrawn as order appeared to hold.

Meanwhile, Japanese forces planted their flags at the Great Wall of China. The distant rumblings of war would thunder across America a little more than eight years later, paradoxically helping fuel what would be the greatest economic boom in U.S. history.

The March 5 edition also carried news from Germany: Chancellor Hitler’s National Socialist Party was expected to maintain its hold on power in Monday’s election. A separate article cast blame on the Nazis for burning down Germany’s Reichstag building in Berlin.

While the state soldiered on in the shadow of a withering economy, rabbits were thriving around Hope. Plans were announced for a big hunt March 11 to battle a ravenous horde “destroying garden and truck patches.” Many hunters “with highly trained rabbit dogs” and a team of drovers would set out in competition for a grand prize. 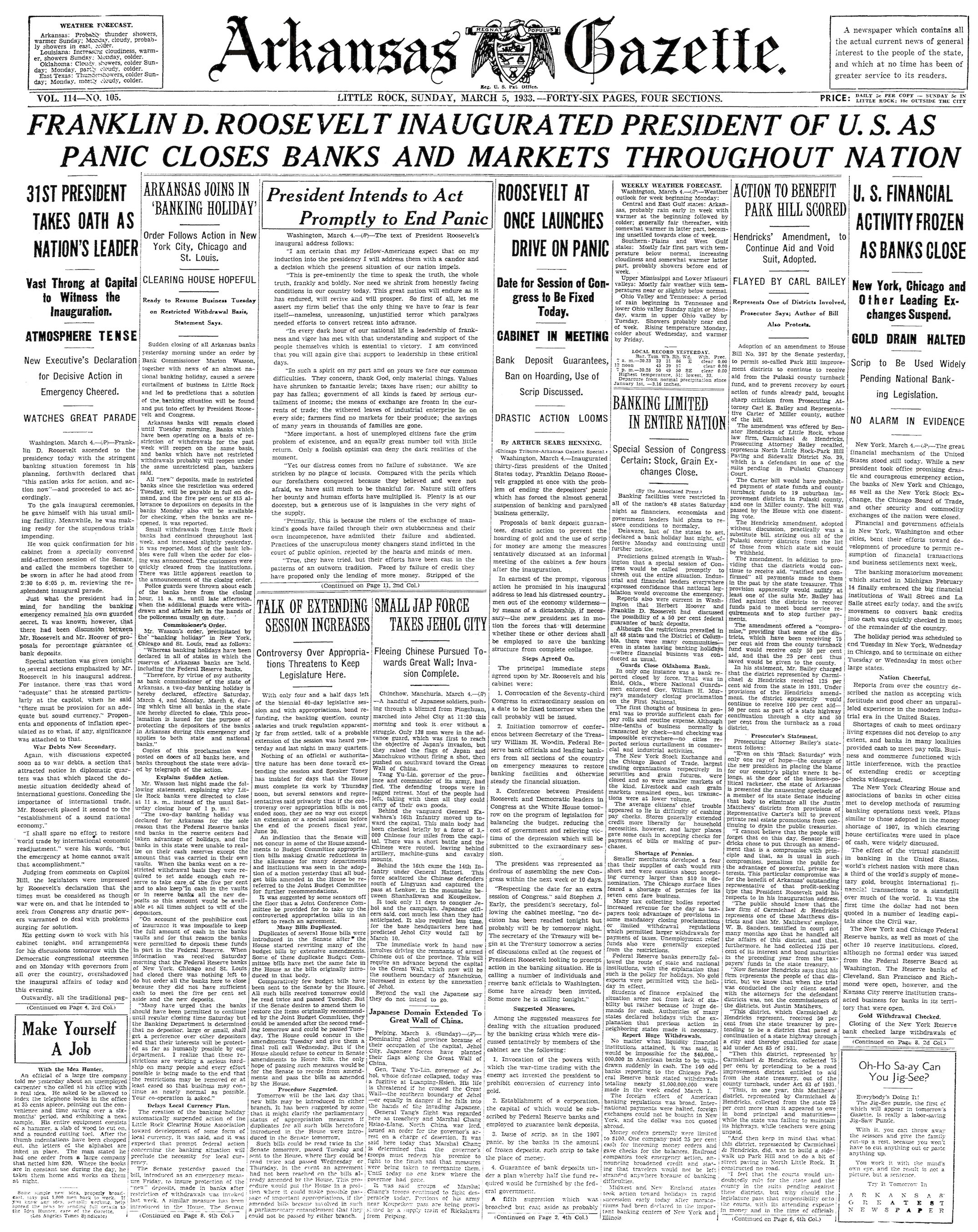