When Clyde Barrow and his girlfriend, Bonnie Parker, were gunned down in rural Louisiana on May 23, 1934, it was front-page news in Little Rock and plenty of other places.

The couple had been on the run from authorities since 1932, committing a string of robberies, kidnappings and murders across a broad swath of territory.

Their crimes stretched from New Mexico to Mississippi. The FBI suspected the Barrow gang of committing 13 murders.

In pre-Interstate America, they wandered through Arkansas many times, stealing money and cars, robbing a Fayetteville Piggly Wiggly grocery store and taking the life of Alma Marshal H.D. Humphrey.

A Page 1 story in the May 24 Arkansas Gazette described the “merciless killers” racing through rural Louisiana at 85 mph, straight into a law enforcement ambush near Arcadia.

Stopping to help a friend who pretended to have a flat tire, the two outlaws weren’t read any Miranda rights. (Those wouldn’t come along till the 1960s.)

“Before the thugs could get their guns into action, the officers riddled them with bullets. Barrow’s car careened from the road and smashed into an embankment. The posse continued to fire until the car was almost shot to pieces,” the story stated.

Federal Bureau of Investigation documents detail some of the Arkansas crimes, noting that the Barrows “have been identified as persons who terrorized the community of Alma, Arkansas and killed an officer near there.”

“They are the toughest bunch of outlaws at large and we are endeavoring to get them located at some hang-out,” special agent in charge F.J. Blake wrote.

Bonnie and Clyde were just two of the famous outlaws who perished in 1934. Bank robber Charles Arthur “Pretty Boy” Floyd, who spent time in Fort Smith, was gunned down Oct. 22. Another headline-grabbing criminal, John Dillinger, met a similar fate July 22.

While many Americans were fixated by crime stories, Adolph Hitler was consolidating power in Berlin.

Following the death of German President Paul von Hindenburg in August, the offices of chancellor and president were merged.

Thenceforth, the nation would have one Fuhrer — or “Leader” — at the helm. 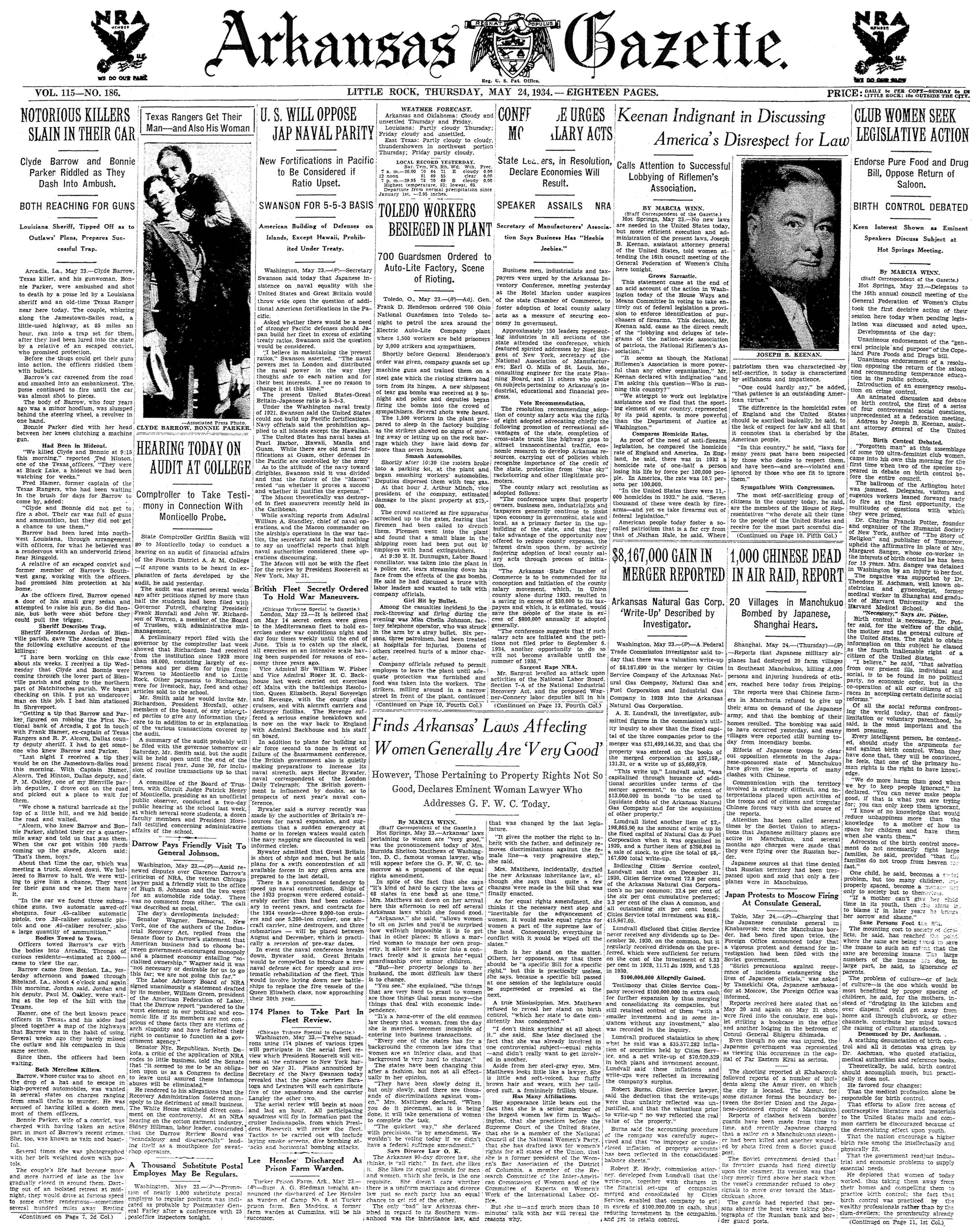