Will Rogers’ and Wiley Post’s fatal plane crash Aug. 15 filled nearly half of the front page and all of Page 3 of this Aug. 17, 1935, Arkansas Gazette.

Their trip, a series of flights that began in Seattle, was in the news before they set out on the morning of Aug. 7. Wire reports speculated that Post would pilot the plane, with his wife and Rogers as passengers, from Seattle to Moscow by way of Alaska and Siberia.

Despite rumors that the goal was a new air route to Moscow, Post and Rogers maintained it was a pleasure trip.

By 5:30 p.m. Aug. 7, Post and Rogers had arrived in Juneau in the red, pontoon-equipped monoplane that had been cobbled together with a new engine, a second-hand fuselage and wings. Mrs. Post had backed out at the last minute, saying the trip might be “too strenuous.”

After several stops, they reached Fairbanks on Aug. 12. From Fairbanks, they set out on the 500-mile leg to Point Barrow, the northernmost tip of the United States. Fog forced Post to land on Harding Lake, 50 miles southeast of Fairbanks, and again in Walakpa Bay, 15 miles south of the town of Barrow (now Utqiagvik).

The engine failed as Post took off from the iced lagoon, causing the nose-heavy plane to dive so a wing sliced the water. The plane landed upside down in the marshy tundra. They died instantly.

Post, who had lost an eye in an oilfield accident, was famous as the first pilot to fly solo around the world, for high-altitude flights and development of a pressurized flight suit.

Rogers was more to Arkansans than just a Hollywood star, columnist, cowboy and humorist. His wife, the former Betty Blake, was from Benton County, and they and their children often visited her mother on East Walnut Street in Rogers.

“Why, I think Arkansas is just about the best state in the Union — well, next to Oklahoma, maybe,” Rogers was quoted. “I married my wife up in Rogers, where she was born and raised, and any state that can turn out as fine a woman as she is, is a fine state.”

They personally donated or raised more than $39,500 for drought relief in 1930. In a whirlwind tour of a dozen cities in three days, Rogers performed for capacity crowds in venues including Dunbar High School, Little Rock Senior High School and North Little Rock’s Rialto theater.

Rogers helped Batesville get its airport in 1931.

Within days of the crash, Congress approved a bill for the Smithsonian Institution to purchase Post’s globe-traversing plane, Winnie Mae, for $25,000, and New York Rep. Parker Corning introduced a resolution for a Will Rogers postage stamp.

Movie theaters across the country went dark for two minutes in Rogers’ memory. Planes with black streamers flew over New York City honoring Post. The Gazette reported 100,000 mourners paid their respects at the funeral for Rogers at Forestlawn Memorial Park in Glendale, Calif. Post was memorialized with two services, one in the rotunda of the Oklahoma capitol attended by 15,000 and a second service at First Baptist Church there.

In Arkansas, businesses in Rogers and Bentonville closed early the day of Rogers’ funeral, and flags flew at half staff in Rogers. 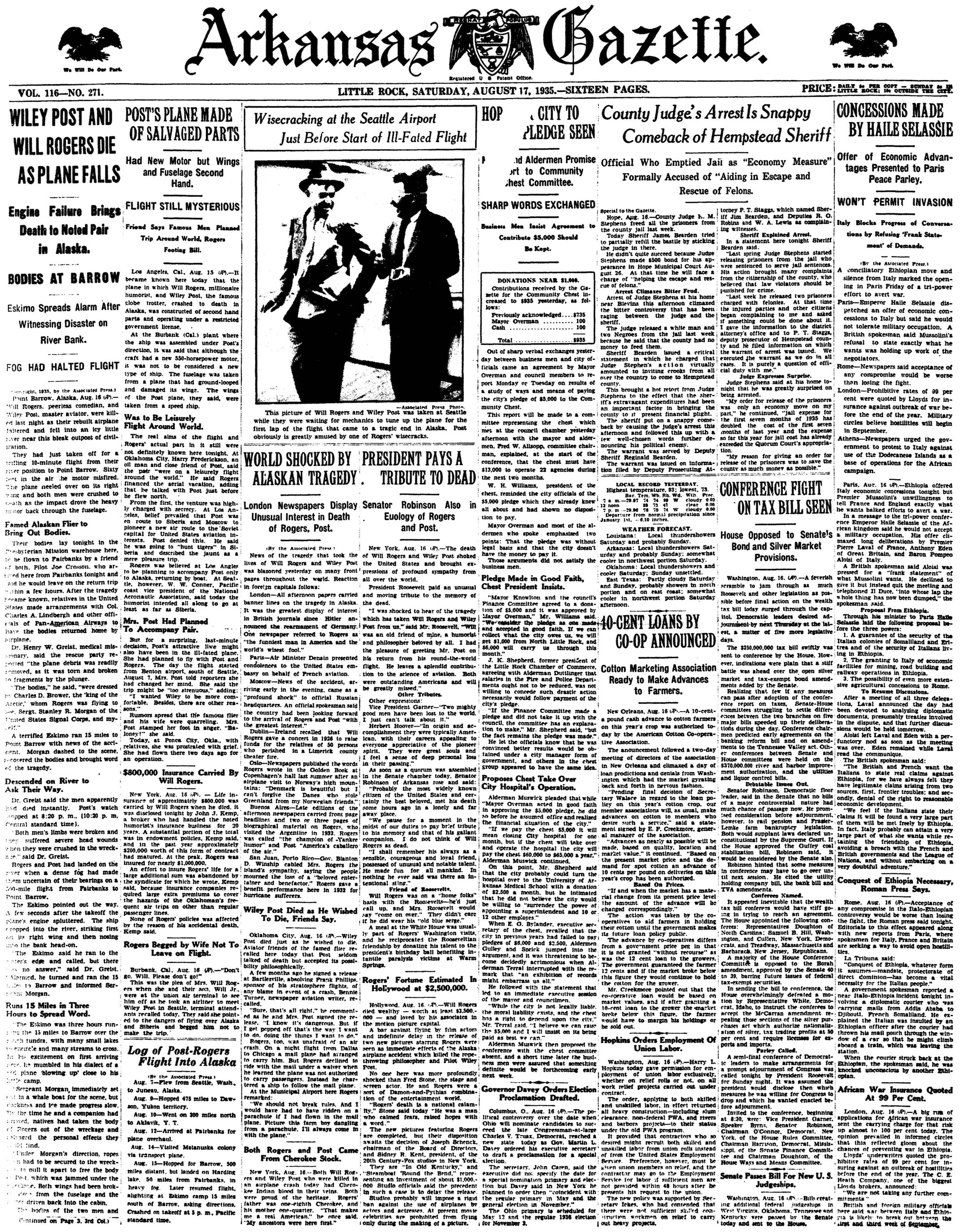