In 1936, Arkansans partied for nearly six months to celebrate the 100th anniversary of Arkansas’ statehood.

Art from Edward S. Brown decorates this Page 1 of the Arkansas Gazette from June 15, 1936, 100 years to the day since President Andrew Jackson signed the legislation that made Arkansas the 25th state in the Union.

A much-anticipated visit from President Franklin Delano Roosevelt and first lady Eleanor Roosevelt opened the centennial fete, and Gazette editor J.N. Heiskell was a guest June 10 at the presidential luncheon in Hot Springs.

The multifaceted celebration included the placing of cast-iron historical markers; designation of a centennial flower: the David O. Dodd Rose; issuance of centennial edition stamps; the crowning of Miss Imogene Schneider of Lonoke as the centennial queen; a centennial poem published by John Gould Fletcher; a centennial song composed by Laurence Powell and Fletcher; and many performances, parades, contests, exhibits and pageants.

Though the Legislature had not appropriated money for the observance, Sens. Joseph T. Robinson and Hattie W. Caraway secured $75,000 in federal funds. Additional funding came through the sale of centennial stamps and envelopes, as well as commemorative coins, the Arkansas half-dollar and the Robinson half-dollar, the latter of which bore Robinson’s profile.

In the Central Arkansas Library System Encyclopedia of Arkansas, John Spurgeon suggests that the centennial benefited Arkansans by reminding them of their heritage but also by “offering a reprieve from the despondency of the Great Depression.” Spurgeon notes that the observance had lasting ramifications because it allowed Arkansas, a “culturally impoverished state,” to “elevate its reputation within the nation.”

In January 1936, the Gazette began advertising for a special State Centennial Edition to be published in magazine form in June. It was touted as a keepsake to be cherished by future generations that would include historical accounts of Arkansas’ journey to statehood, a year-by-year synopsis of events in the state since 1836 and ample space for merchants to take advantage of an “unexcelled opportunity for advertising of a historical and permanent nature.”

The Gazette Publishing Co. had more than 50,000 daily subscribers and more than 66,000 on Sundays; starting June 15, Gazette carriers delivered a free copy of the centennial magazine to each of them. All told, 75,000 copies were printed, leaving plenty for nonsubscribers to buy at 50 cents a copy or $2 for a cloth-bound version.

The Gazette exulted that the edition represented “two years of work and many thousands of dollars,” and would be worth having as a “permanent memorial to Arkansas’s Centennial … preserved in tens of thousands of Arkansas homes.”

To view the front cover of the Gazette’s State Centennial Edition, go to arkansasonline.com/200/1936bonus.

BONUS: Click here to see the front cover of the Arkansas Gazette’s State Centennial Edition in 1936. 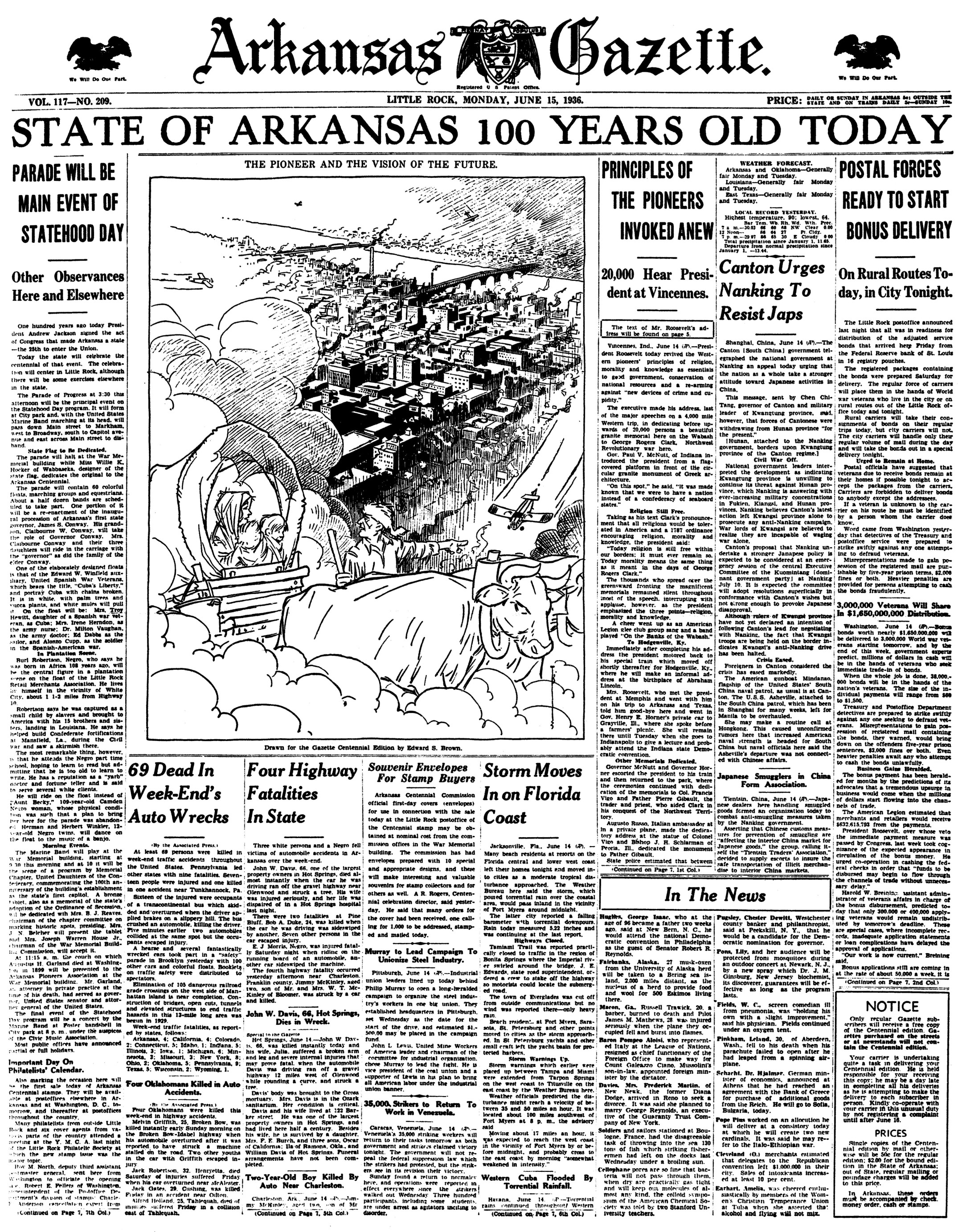