As part of Nazi Fuhrer Adolf Hitler’s attempt to unite all German peoples, in late September 1938 he issued an ultimatum to Czechoslovakia giving the country until Oct. 1 to surrender Sudetenland, a region including parts of Bohemia and Moravia whose populations were predominantly German.

Hitler had annexed Austria in March 1938.

The Munich Pact granted Hitler four Sudeten zones to be ceded to him by Czechoslovakia and some of the details of the occupation, such as times set for evacuation and surrender of the zones, would be regulated by an “international military commission.”

Excluded from the talks, Czechoslovakia Prime Minister Gen. Jan Syrovy yielded to the agreement under protest, lamenting that his country had been “abandoned.”

On his return to London, Chamberlain “steadfastly defended all he had done,” stating that he believed the four leaders at Munich had “averted a catastrophe which would have ended civilization as we have known it.”

“Expressions of dismay, humiliation and rage preceded and followed” his remarks in the House of Commons.

Alfred Duff Cooper, who had resigned the week prior from the position of first lord of the Admiralty under Chamberlain, rose to respond to the prime minister and “sobbed as he asserted that the price of peace at Munich ‘stuck in [his] throat.’” Cooper accused Chamberlain of using the language of “sweet reasonableness” with Hitler when he “believed [Hitler] was more open to the language of the mailed fist.” Of Czechoslovakia, Cooper said, “I think that having accepted the humiliation of partition she should have been spared the ignominy and horror of invasion.”

But invade Hitler did. He began on Oct. 1 with the first Sudeten zone.

On the front page of this Oct. 4 edition, the Arkansas Gazette gives an account of Hitler’s welcome by cheering crowds and banners that read “Thanks to our deliverer!” as he entered the third zone on Oct. 3rd. He “rode victoriously” for 40 miles in an open car with his retinue of soldiers, airplanes, armored cars and artillery.

Sumner Welles, United States Under Secretary of State, asserted that the U.S. government had taken action “pursuing the course best calculated to aid in preserving peace and in ensuring the safety of this country.”

Welles insisted that the “great underlying needs” now were economic reconstruction and “the limitation and reduction of armaments, together with a world-wide agreement to cease for all time attacks on civilian populations.”

Contrary to hopes that Hitler would be satisfied after the annexation of Sudetenland, in March 1939 Hitler invaded what was left of Czechoslovakia. 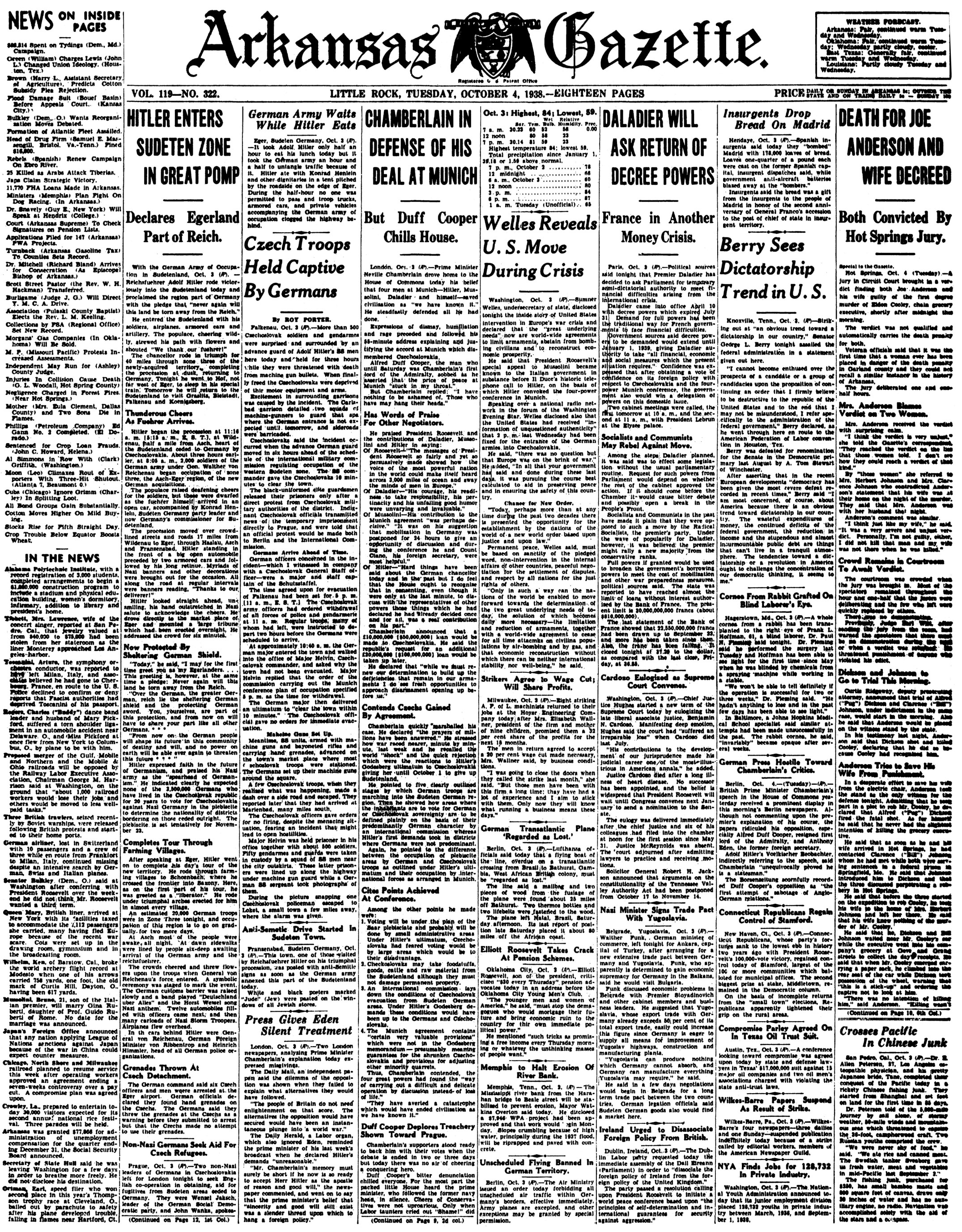