War news dominated the Aug. 21, 1940, edition of the Arkansas Gazette, with detailed reports from around the globe filling its front page.

Italy was reportedly gathering a force on the border of Greece.

And the Battle of Britain had begun. British Royal Air Force long-range bombers attacked German-held targets that ranged from Norway to southern France in their effort to “smash Nazi springboards for any attempted invasion,” while the German Luftwaffe targeted four towns in Britain: two in Essex, one in South Wales, one in Anglia.

Readers were treated to a map of the reported targets.

An Air Ministry report of the ongoing air strikes said that during one mission when British bombers “found a flare path lighted in readiness for returning Nazi aircraft,” the German air traffic controllers thought a Blenheim light bomber was a German plane. The Germans signaled the all clear for it to land, but the British pilot “replied with a load of bombs.”

War crept onto the Gazette editorial page as well, the editor querying, “If Germany should have the power to decide the fate of the nations of Europe, would the swastika ever be lowered, not alone in Poland, but in Denmark, Norway, Holland, Belgium, and such parts of conquered and occupied France as might suit German purposes?”

The United States was not yet directly involved in the conflict, but in New York the effects of the attack on Britain were felt as the Cunard White Star liner Samaria arrived with 138 British children among its 680 passengers. The children were sent from Britain for war-time adoption in American homes, the first group to be taken across the Atlantic by the United States Committee for the Care of European Children.

Rumblings of U.S. involvement in the war could be heard as U.S. President Franklin D. Roosevelt and British Prime Minister Winston Churchill discussed an arrangement for Britain to lease to the United States some of its island territory “from Newfoundland to the Caribbean” for defense bases. In his speech to the House of Commons, the “utterly confident” Churchill argued that Britain and the United States “would have to be mixed up together in some of their affairs for mutual and general advantage.”

Another report from Washington stated that Congress stood ready to authorize Roosevelt to call out the National Guard and the army reserve for a year’s military training.

At least one division of National Guard troops was to be trained at Camp Joseph T. Robinson, and on the last page of this Gazette edition, readers were told the formal agreement “governing Little Rock’s commitment to the War Department” would be signed that day at the Chamber of Commerce office. 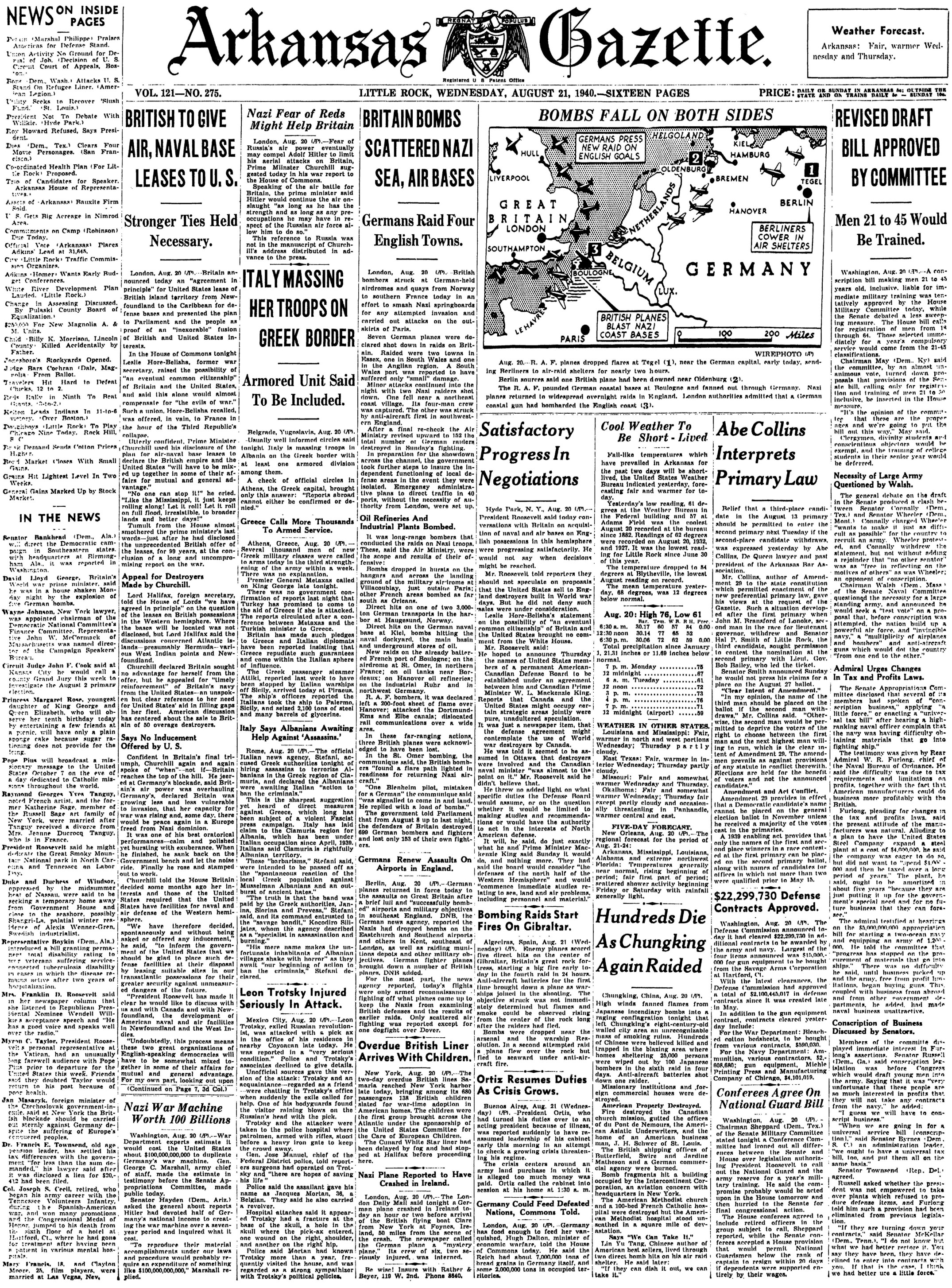