Living on in infamy as it does, Dec. 7, 1941, needs no introduction. That was the day a strike force of 353 Japanese aircraft bombed Pearl Harbor, a strategically placed U.S. military outpost on Oahu in the then-U.S. Territory of Hawaii. It was the day that shoved the United States off the sidelines and into the thick of World War II.

On that cool but sunny Sunday in Arkansas, subscribers had a full morning of blissful ignorance in which to burrow through their 84-page bundles of the Arkansas Gazette. In the funnies, Dick Tracy was in peril in a snowstorm, and Dinglehoofer’s dog Schnappsy inadvertently caught a crook. The Sunday magazine had cheerful anecdotes from the Arkansas National Guard’s deployment to Alaska.

There was time to frown at the news in the A section: Japanese troops gathering in French Indo-China; President Franklin Delano Roosevelt sending Emperor Hirohito a direct message, contents undisclosed; diplomats leaving Japan’s embassy in Washington.

About 1:30 p.m. CST, news broke of the attacks on Pearl Harbor and the Army airport Hickam Field three miles away. If the Gazette published an Extra edition that afternoon, no copies remain in the archives.

This Page 1 from the next morning, Dec. 8, conveys the shock of details that were still uncertain because the War Department imposed tight censorship. It would be a few more days before readers knew the magnitude of the toll, which the National WWII Museum tallies today as 2,403 sailors, Marines, soldiers and civilians dead; 1,178 wounded; 19 ships sunk or damaged; 328 aircraft damaged or destroyed.

Related stories peppered inside pages: Sen. Hattie Caraway was rushing back to D.C.; all enlisted reserve members ages 28-35 could be called to active duty. Also, California state finance director George Killion was offering his state’s 12 relief camps as sites for “possible concentration camps for the internment of Japanese nationals.” Other articles suggest a nation in a state of rising readiness: A special train of military prototypes was at the Rock Island depot, and 700 small businesses and manufacturers had been invited to come aboard for tips on bidding for contracts.

Three aircraft carriers were away at sea during the attack, and no heavy cruisers were hit: The American fleet was not crushed. But American isolationism was. As a boxed editorial on this page declared, “There is only one thought and one purpose in America today.”

At noon Dec. 8, Roosevelt stood before the House of Representatives and gave the 10-minute speech that begins, “December 7, 1941 — a date which will live in infamy.” Within the hour, Congress declared war on Japan.

Only one pacifist, Rep. Jeannette Rankin of Montana, voted no. But 14% of Congress was listed as not voting, including three of Arkansas’ nine-member delegation: Rep. Clyde Ellis and Sens. Caraway and George Spencer couldn’t reach D.C. in time. All were on hand Dec. 11 to join the majority in declaring war on Japan’s allies Germany and Italy. 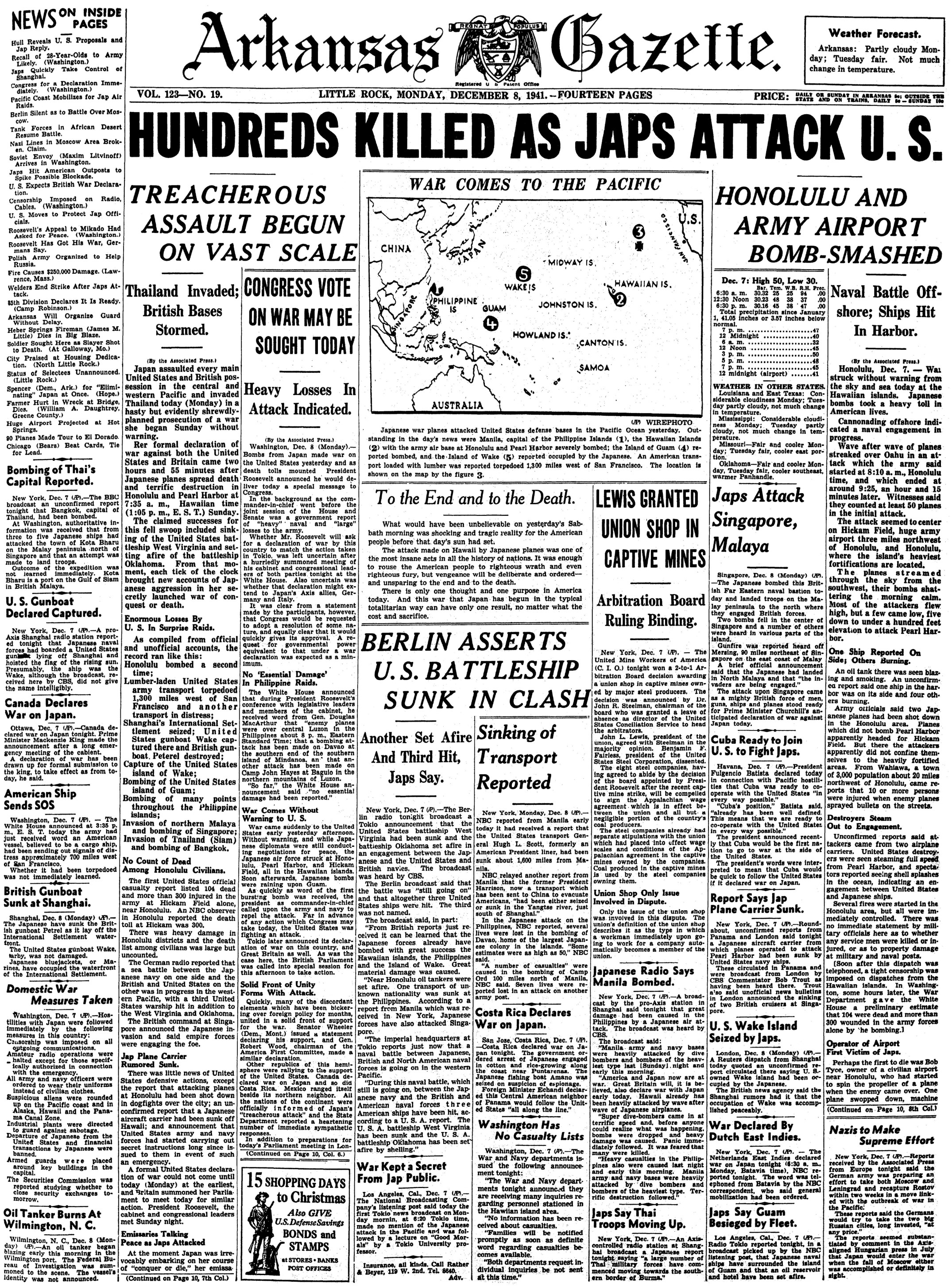