A bronze soldier wearing a complicated expression of resolve straddles a 1942 Harley-Davidson WLA in a triangular park beside Fort Smith’s Garrison Avenue. Arkansas sculptor Kevin Kresse posed him: right arm extended decisively to direct unseen followers, left hand resting on the handlebar in a sensitive, poet-warrior gesture that has been described as reaching for C on a clarinet. Gen. William O. Darby (1911-1945) gestures to the east and, by romantic extension, to Italy, where he did the deeds that made Fort Smith’s favorite son a U.S. Army Ranger icon during and after World War II.

Reports on this Page 9 of the July 17, 1943, Arkansas Gazette go a little way toward explaining Darby’s fame.

For the third time, the lieutenant colonel had declined Lt. Gen. George S. Patton’s proffered promotion to full colonel and command of a regular infantry combat unit. He wanted to stay with his Rangers, men he had recruited and trained.

As their founding commander, the “broad shouldered, two-fisted” Arkansan had attracted interest from the English press even while his unit was learning their methods from British Commandos in Northern Ireland and Scotland. As soon as the Rangers landed in Europe and began to fight, he was idolized for taking the chances his men did, fighting with them side by side.

The colorful battle description on this page is a snapshot from the Allied invasion of Italy, and it portrays his spirit of camaraderie. The Gazette of the day before included another eye-witness account: Darby leaving the safety of a captured hotel to try to take out an enemy tank while armed only with a .30-caliber machine gun, in a jeep. When he ran out of ammunition, he whipped the jeep around and sped to the beach, where he borrowed an anti-tank gun from disembarking soldiers, recruited a captain to help him wrestle it onto the jeep and then sped back to town. He and his helper dragged the gun off the jeep and onto the sidewalk to fire it. The recoil knocked them off their feet, but the tank blew up.

And then he lobbed grenades and incendiaries at another tank until its crew surrendered.

In January 1944, near Cisterna, he saw most of his men killed, maimed or captured in a devastating firefight. He reorganized a tattered regiment and pressed on until Patton ordered the exhausted commander, now a full colonel, back to the States to recuperate. After 11 months riding a desk in the Pentagon, he lobbied his way back into action in Italy.

On April 30, 1945, a bit of shrapnel from an exploding shell hit him while he briefed his officers on the next day’s attack plan. One dime-size hole, in his heart, and he was dead at 34. Germany surrendered two days later.

To read about the Darby memorial in Fort Smith and view photos, go to arkansasonline.com/200/1943bonus/ 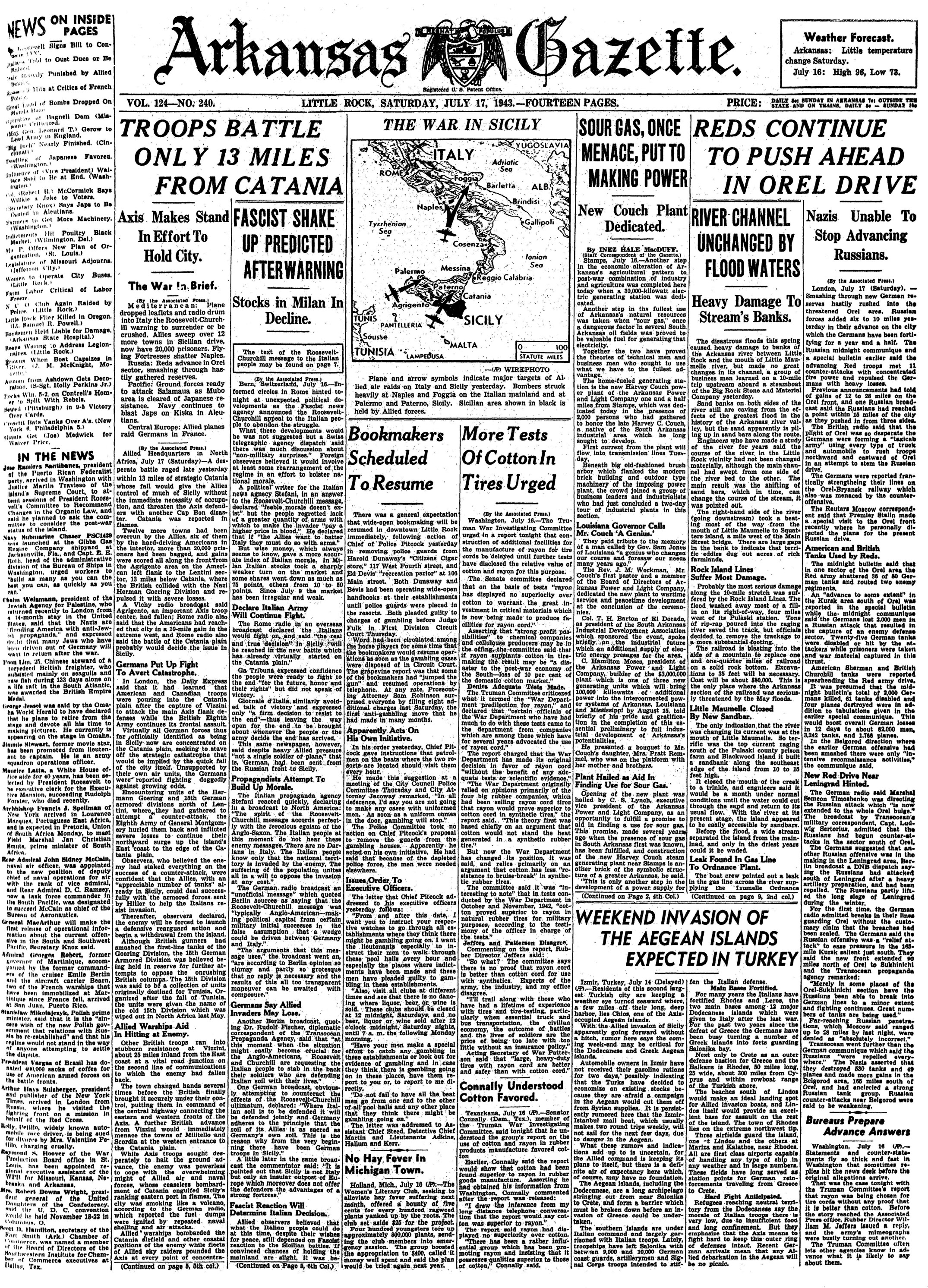 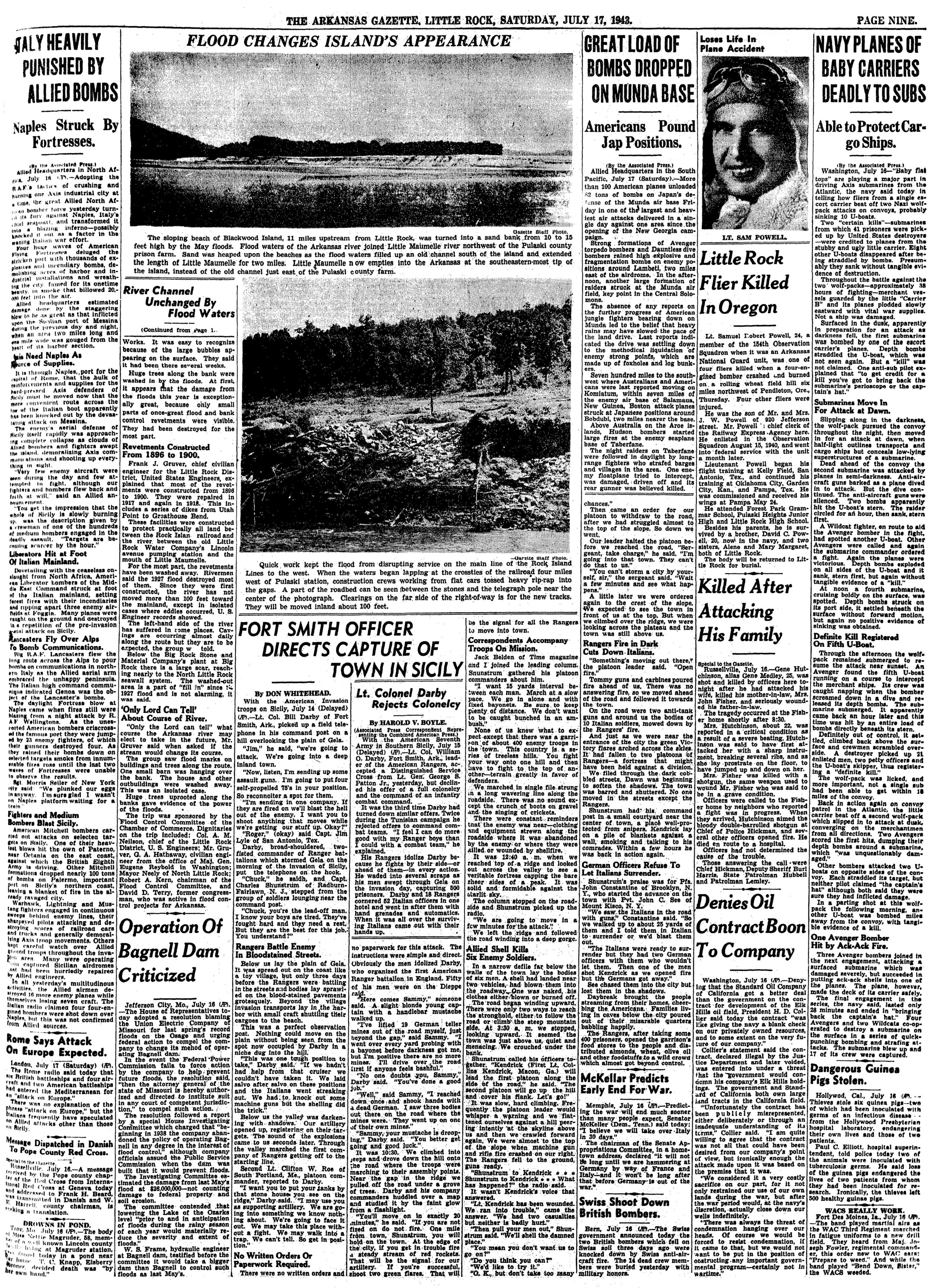