Franklin Delano Roosevelt was three months into his fourth term as president and just 63 years old when he died April 12, 1945, at his personal retreat in Warm Springs, Ga.

The news of his death by cerebral hemorrhage on the front page of the Arkansas Gazette the next day was accompanied by war reports from Paris and the South Pacific and news of a tornado that killed 68 in Oklahoma.

The president, famous for his radio Fireside Chats, was sitting in front of a fireplace in what was known as the Little White House when he became ill.

“I have a terrific headache,” were Roosevelt’s last words, according to his doctor.

The April 13 Gazette editorial lamented that the president would not be able to shepherd the nation toward peace.

“No other man in America, if in the world, was so well equipped as Franklin D. Roosevelt to play a vital part in winning the priceless victory of peace after victory in the greatest war in history. No other man in the whole world meant more for that freedom, that guarantee of human rights, that we call democracy.”

There were large ads from Little Rock department stores M.M. Cohn Co. and Pfeifers saluting Roosevelt, whose New Deal programs of the 1930s were aimed at lifting the country from the Great Depression.

Roosevelt visited Hot Springs on June 10, 1936, that city’s centennial. He was very interested in touring the spas, having been diagnosed with polio when he was 39. He was able to walk with braces on his legs. He also used a wheelchair.

Rumors of poor health in the last months of his life were referenced in the reporting. He had spent several weeks at Warm Springs in November and December and had been there for three weeks at the time of his death.

Reporters who attended a news conference a week before he died noted his “gray pallor” and “weak voice.”

It was at that news conference that he outlined “ambitious postwar plans for American participation in the Western Pacific to prevent further Japanese aggression.”

Hours after Roosevelt’s death, Vice President Harry Truman was sworn in as president.

A story on Page 5 noted that the Missouri native was a frequent visitor to Hot Springs. A brief item on the same page explains how some were referring to him as the 32nd president, while others said he was the 33rd. The debate had to do with whether or not Grover Cleveland, who served two nonconsecutive terms, is counted once or twice. Truman is today considered the 33rd president. 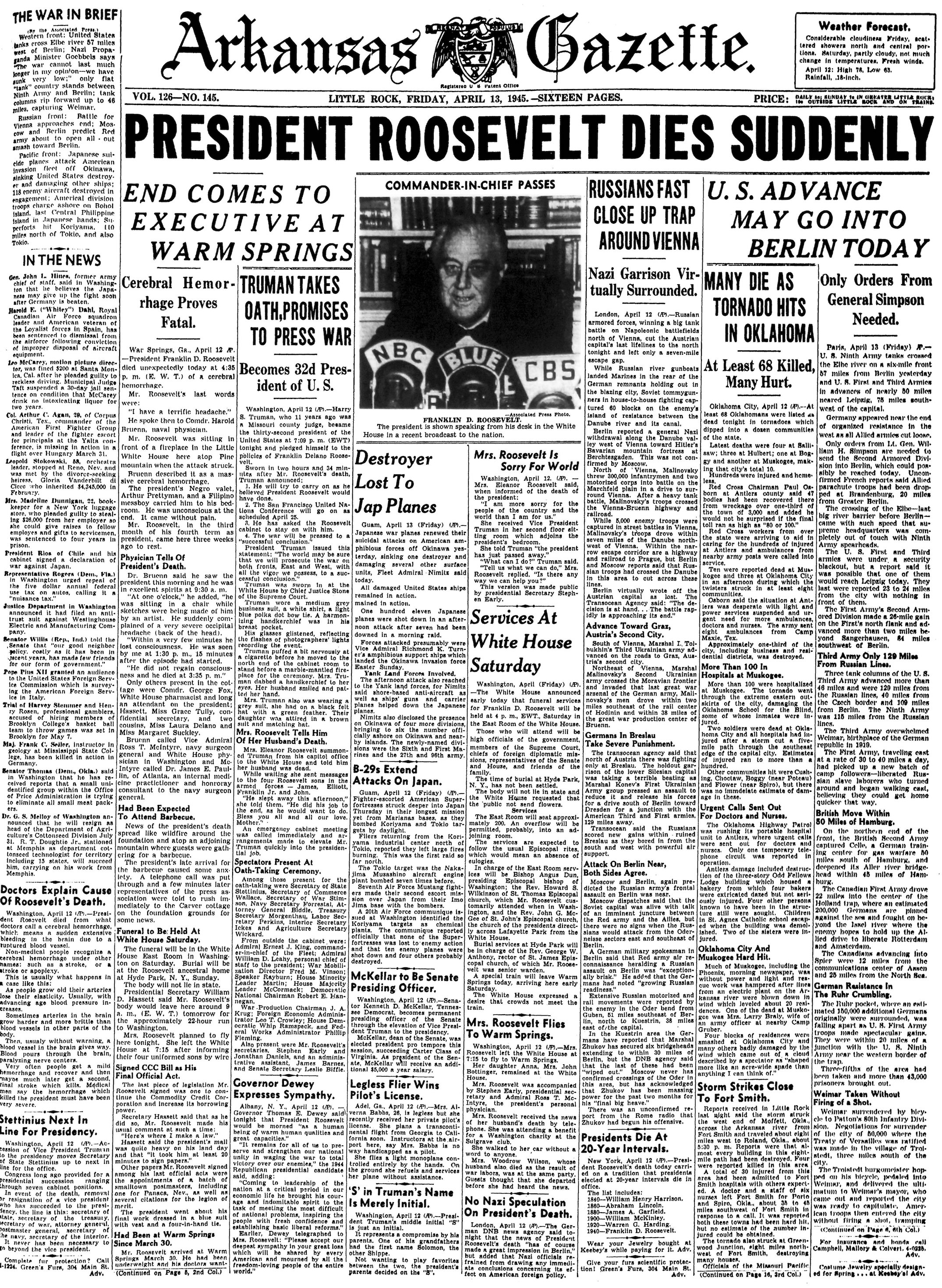