After requests from qualified black students including Clifford Davis and Wiley Branton, the University of Arkansas agreed to admit its first black students to graduate school Jan. 30, 1948.

The decision came less than a month after the U.S. Supreme Court ruled that Oklahoma had to provide educational facilities for black students equal to those of white students.

The story featured on Page 1 of the Jan. 31, 1948, Arkansas Gazette indicated that an offer had been extended to Davis of Little Rock to attend its law school but suggested that black citizens pushing for the right to higher education “will not be satisfied with the concessions announced.”

Those concessions included instruction in a room separate from white students, and, according to the Central Arkansas Library System Encyclopedia of Arkansas, barred black students from entering the school’s library or restrooms used by white students.

Davis — a graduate of Little Rock’s Dunbar High School and Philander Smith College — did not accept those conditions, instead obtaining his law degree at Howard University in Washington. He would practice law for more than three decades. Davis assisted national NAACP leader and attorney Thurgood Marshall in the case that would become Brown v. Board of Education, the ruling that outlawed racial segregation of children in public schools.

The terms did not deter Silas Hunt, an Arkansas native and World War II veteran. He blazed a trail in February 1948 by becoming the first black student admitted to the University of Arkansas since Reconstruction and the first black student in any former Confederate state to undertake graduate studies. In April 1949 he died of tuberculosis — possibly related to his war injuries, according to the encyclopedia. The UA posthumously awarded him a degree in 2008.

Branton, described on this page as intending to apply to the university’s College of Business Administration, was rejected from that program but went on to attend its law school. The university’s Arkansas Black Lawyers Project notes that Branton in 1956 represented black high school students and their families who wished to integrate Little Rock Central High School in a case that became Cooper v. Aaron, the Supreme Court ruling that the Little Rock School District could not postpone its desegregation.

In separate statements, university President Lewis Jones said the decision to admit Branton for undergraduate studies rested with the college’s governing board; Herbert Thomas, the university’s board of trustees chairman, called “an attempt to force admittance” of blacks to undergraduate programs “an error of judgment.”

James Willis notes in his book Southern Arkansas University: The Mulerider School’s Centennial History, that undergraduates would not be admitted to a university until August 1955, when Attorney General Tom Gentry advised Arkansas college presidents that Brown v. Board of Education also applied to colleges.

The same day the civil rights movement in Arkansas took a baby step, a Hindu fatally stabbed nonviolence advocate Mohandas Gandhi while the peace leader was on his way to an evening prayer meeting. When Bombay (now Mumbai) residents received the news, the “looting, arson and stabbing” that ensued resulted in 15 deaths and 54 people injured. 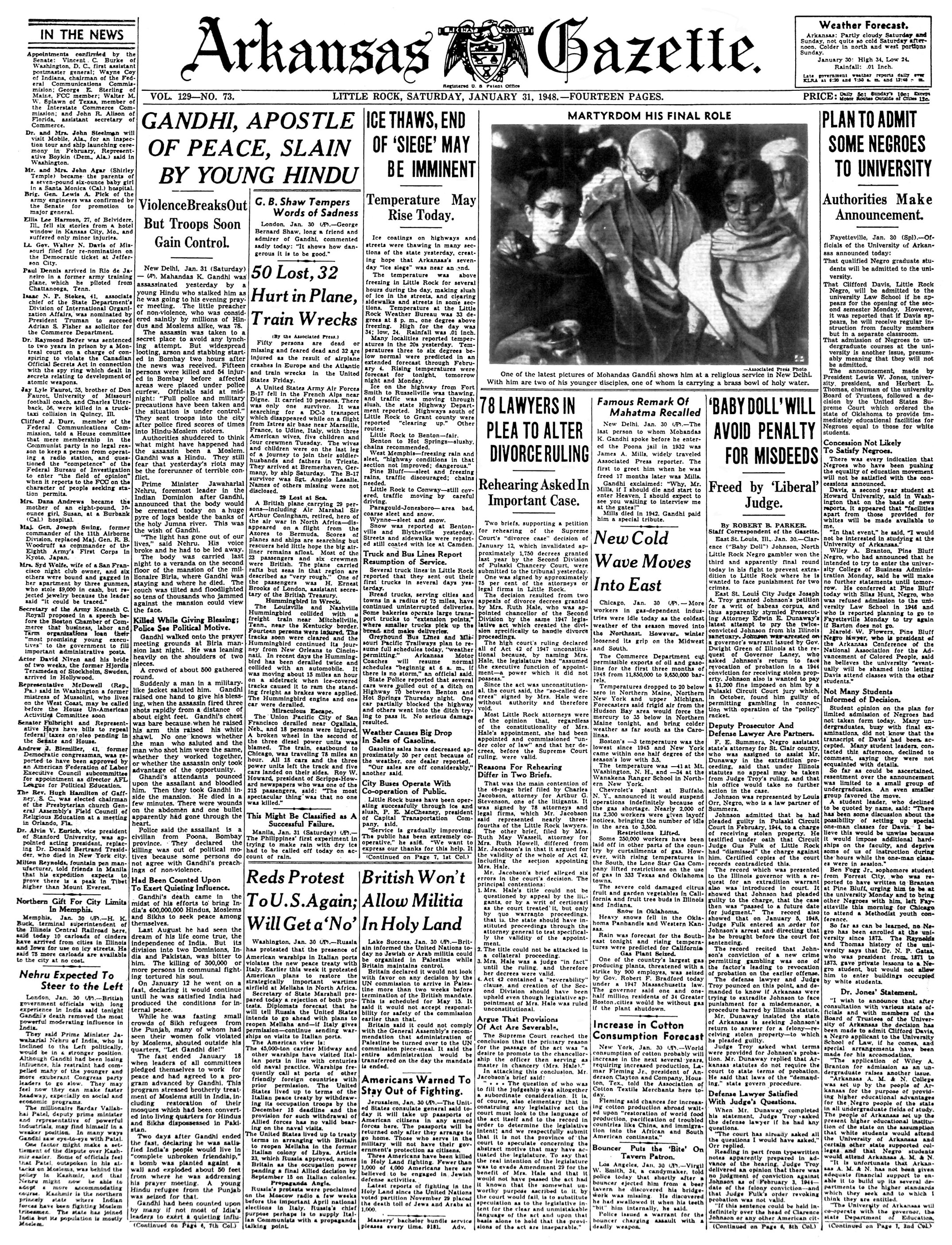