The five-star hero of World War II was fired.

Tasked with leading a United Nations police action to drive Communist North Korea out of South Korea and back across the 38th parallel, MacArthur instead had wanted to pursue the retreating enemy into Manchuria and crush all the Communists there. But he was ordered not to do that.

Truman, the Joint Chiefs of Staff and the State Department had not failed to notice that North Korea was allied with the People’s Republic of China, which was allied with the Soviet Union. Communist China’s vast army was battle-hardened from having driven the Chinese nationalist leader, Chiang Kai-shek, into isolation on Taiwan (then called Formosa).

Chiang wanted to draw the United States and its atomic weapons into his fight with mainland China. MacArthur liked Chiang’s assurance that the Communist Chinese would not get involved in Korea; he did not like Truman’s imperative of a limited war.

After leading a victorious assault at Inchon, Korea, MacArthur disbelieved reports that the Chinese were already on the battlefield. He divided his forces to attack in two directions, and with Truman’s reluctant agreement, crossed the 38th parallel.

He then presided over one of the worst debacles in U.S. military history, an overwhelming defeat and disastrous retreat in deadly winter weather. His troops were demoralized — until Ridgway, replacing a commander who died in a crash, revitalized the Eighth Army and drove the Communists back across the 38th parallel.

Ridgway’s success gave the State Department an opening to negotiate a settlement with North Korea. As historian David McCullough explains in his biography, Truman, the president and his advisers carefully prepped a cease-fire proposal and sent it to the 17 other U.N. nations with troops in Korea. The Joint Chiefs also relayed the gist to MacArthur.

On March 24, he sent the Chinese an insulting ultimatum and offered himself as the man to contact to arrange a settlement.

Not only had he bulldozed diplomacy, he had flouted a directive that no speeches, press releases or other statements concerning public policy should be released before clearance from the Department of State.

Truman spent two weeks in consultation with military advisers and the Joint Chiefs, who were unanimous that MacArthur had to go. He had broken the orders of his commander in chief, the president. He had undermined the American system.

Although it had been mentioned in large newspapers for weeks, the significance of MacArthur’s insubordination was not apparent to the general public in April 1951. Not only had the hero been sacked, he was sacked via telegram. Public outrage took aim at Truman. 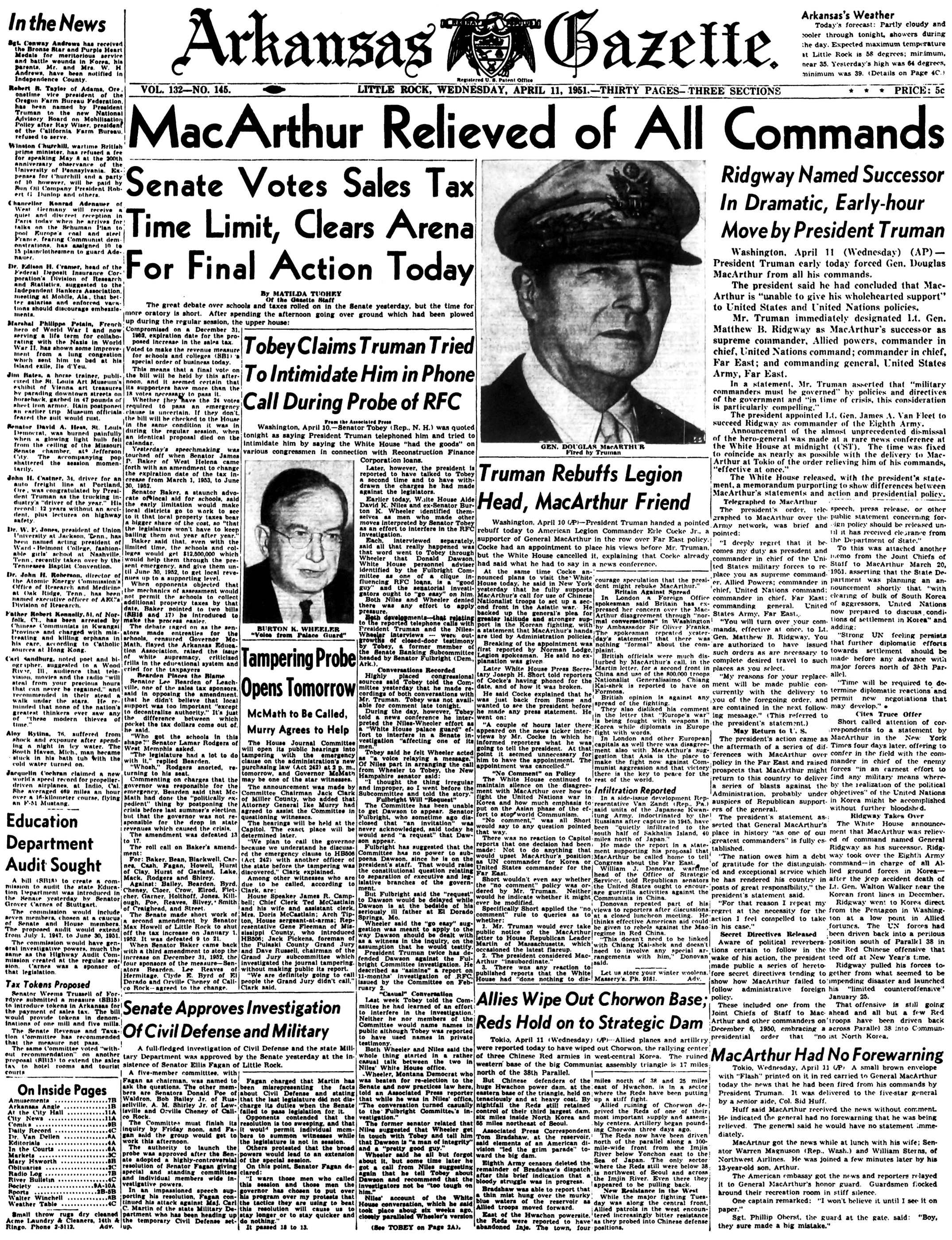