1952 set the wrong kind of record for Arkansas.

A tornado outbreak killed more people in the state that year than any other time on record.

According to the Central Arkansas Library System Encyclopedia of Arkansas, the state saw tornadoes seven months out of 12 in 1952. Many of them did little damage and caused few injuries.

On that day, according to the National Weather Service, tornadoes killed 111 people and injured another 772 in Arkansas. “The best-known was the infamous ‘Judsonia Tornado’ in White County,” the service said in a February 2019 article.

The front page of the March 22, 1952, Arkansas Gazette is nothing but story after story of the storms. Each article spotlighted a specific town or county. At the top is a photo of Dierks, located in southwest Arkansas. The area looks like it was bombed.

In the first column is a list of the dead, formerly a common item in newspapers when a great many died.

The March 22 edition says the death toll was 125, but it’s typical for such counts to be off in the immediate aftermath of a disaster.

A telling item is in the upper right corner — the day’s weather forecast, which said the expected high was 48 and the low was 35. The day before? A high of 77 was reported. The cold front that brought in the near 30-degree temperature drop created awful storms when it mixed with warm, moist air from the Gulf of Mexico.

As is typical for such storm systems in Arkansas, the tornadoes started in the southwest corner of the state and moved northeast.

The Enhanced Fujita scale for grading the strength of tornadoes had not yet been developed, but if it had been in place, several of the twisters would be rated as EF4s, the second-most damaging type of tornado, the encyclopedia says.

The March 24, 1952, Gazette noted in the lead story: “Arkansas yesterday buried some of its dead, tended hundreds of injured, cared for thousands of homeless and began cleaning up the wreckage of 10 counties devastated by Friday’s tornadic winds.”

The photos continued to show towns that were shredded.

Judsonia buried 30 victims in a mass burial. Six children — all siblings — were buried in Cotton Plant.

The edition told of the recovery efforts, the money that had been raised and who had collected goods.

But by the March 30 edition of the Gazette, only an editorial on the front page concerned the disaster. It appealed for aid for the Red Cross.

The lead story that day? President Harry Truman announced he would not seek re-election. Life marches on. 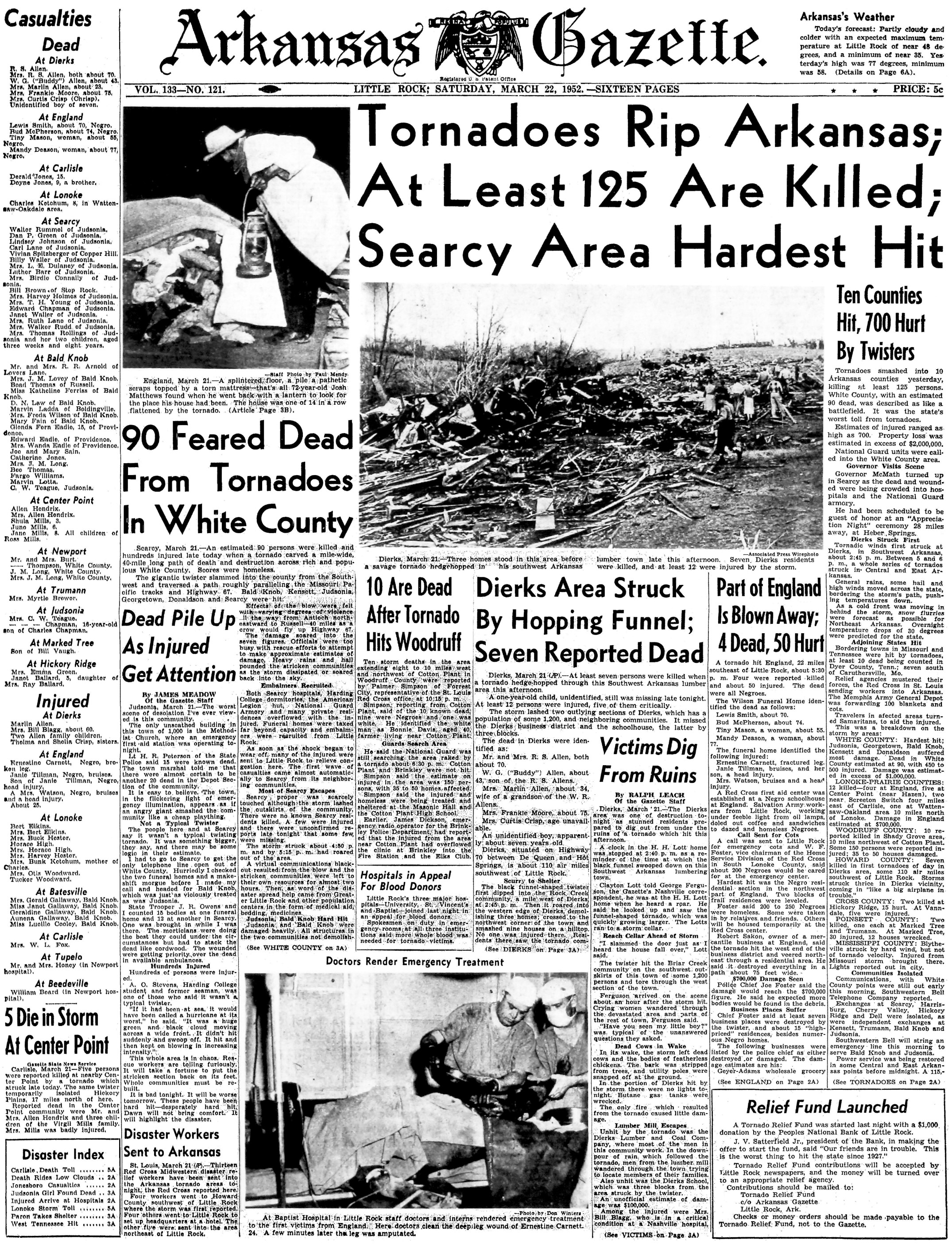