In 1953, the Korean War, by this time a stalemate focused mostly on hill battles, was dragging on and the much broader Cold War was underway. It was the year that Soviet Premier Josef Stalin died.

This March 6, 1953, Page 1 of the Arkansas Gazette is nearly covered in reports of his death and speculation on who his successor would be. One article highlights the importance of the next leader with this line: “The greatest fear was that it would be someone inclined toward reckless action that could touch off World War III.”

The only non-Kremlin news on the page is the popular In the News column, a brief on the failure of a bill to make federal income tax payments deductible on state taxes, and a report on the West’s first capture of a Russian MIG jet fighter.

The report calls Stalin “the most powerful dictator in history.” He had played a key role in defeating Germany in World War II by barraging the eastern German battleline with millions of troops. By far the most casualties suffered by any nation, 22 million to 28 million Russians died in the war, according to the National WWII Museum in New Orleans.

But after the war, the world began to divide itself ideologically as communist regimes popped up, and champions of democracy, such as the United States, fought to limit communist influence, as was the case in Korea. Despite the tensions, President Dwight D. Eisenhower, another key figure in defeating the Germans, sent condolences to the Kremlin. Early reports pointed toward Georgi M. Malenkov as “heir to Stalin.” They would prove true.

Page 3 detailed such troubles in what became a microcosm of the wider conflict, West and East Berlin. “More Barriers to West Berlin Erected by Reds” the headline read. “West Berlin Mayor Ernst Reuter predicted 50,000-60,000 East Germans would seek asylum in this outpost of the free world.”

Also on Page 3, Brigadier General Eulogio A. Cantillo of Cuba was set for a “social call” in Little Rock to visit food exporter Bill Doolin at his home. Cantillo was second in command of the Cuban military under the dictator Fulgencio Batista. A few months after this issue’s printing, Fidel Castro, a lawyer and politician who would overthrow Batista in 1959, attempted to start a people’s revolution by leading a raid on Santiago, according to the Encyclopedia Britannica. Most of his followers were killed by Cantillo’s army, and Castro and his brother imprisoned — until 1955.

Page 4 reported that convicted Soviet spies Julius and Ethel Rosenberg, sentenced to death, had been offered a final deal: life in prison for all of the information they had about the Russian espionage. Both were executed June 19.

Page 6 told of Dr. Joseph W. Weinberg’s acquittal on a charge that he had lied about having been a member of the Communist Party. He had been accused by the House Un-American Activities committee of being Scientist X, a spy said to have shared nuclear secrets with “the Reds.”

Page 14 reported Arkansas casualties in Korea: A soldier from Black Rock was killed in combat, and a Fort Smith sergeant was captured by the Communists. Three other Arkansans were reported wounded.

CORRECTION: The National WWII Museum in New Orleans states that Russia suffered between 22 million and 28 million total deaths in World War II. An earlier version of this story incorrectly characterized the total. 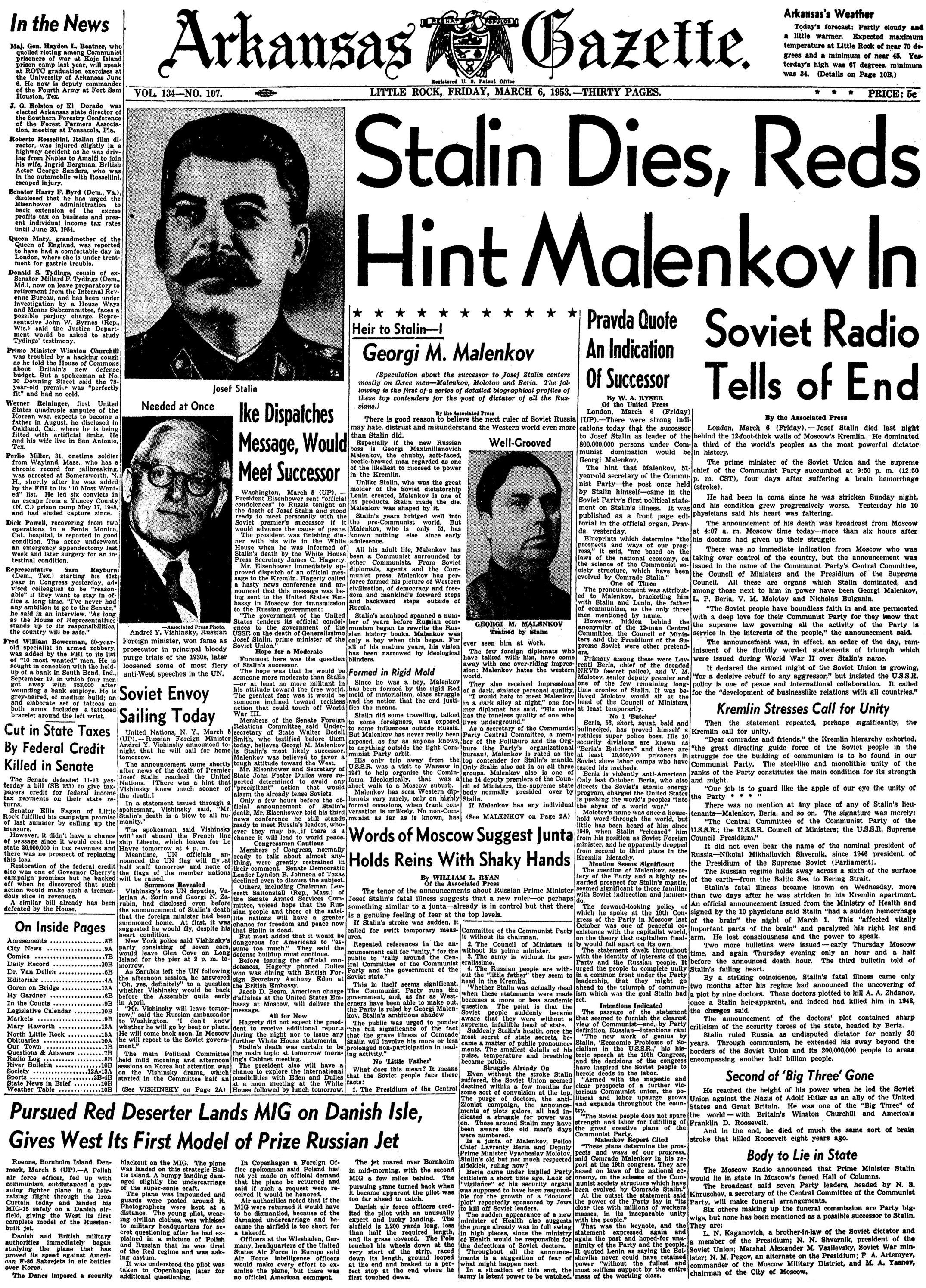