Since the end of WWII, fear of communist influence had been growing in the United States. Communist regimes controlled China and North Korea, and the execution of Julius and Ethel Rosenberg as Soviet spies in 1953 fed the “Red Scare.”

Enter Sen. Joseph McCarthy (R-Wis.), chairman of the Senate’s Committee on Government Operations and of its permanent subcommittee on investigations. This subcommittee began a hunt for Communists from which it seemed no one was exempt. Though none of McCarthy’s accusations produced convictions of involvement in plots against the country, he held the spotlight, and the nation held its collective breath to see who would be accused next.

But in April 1954, Army officials brought charges against McCarthy and his aides Roy Cohn and Francis Carr, asserting that they “tried by ‘improper means’ to get favored treatment for draftee G. David Schine,” who had been McCarthy’s chief counsel before he was drafted as a private. They wanted him given a commission with light duties and spared overseas deployment.

McCarthy countered with his own charges, accusing Army Secretary Robert T. Stevens, Army counsel John G. Adams and others of trying to blackmail him “and otherwise block” his search for Communist infiltrators in the Army.

But this Page 1 of the April 22, 1954, Arkansas Gazette reported a new development: McCarthy had added a new target to the hearings, Assistant Secretary of Defense H. Struve Hensel. McCarthy claimed that Hensel masterminded the Army report “blasting” him, to divert attention from his own “possible law violations.”

The Gazette reported that “at least one Subcommittee Democrat, Senator John L. McClellan of Arkansas, questioned whether the Hensel affair had anything to do with the charges and counter-charges the group is supposed to investigate in the hearings opening tomorrow.”

The hearing, televised, lasted more than 30 days, with McCarthy’s tactics on display for all to see, and the public turned against him.

While the subcommittee acquitted him, in December the Senate voted 67-20 to censure him.

By coincidence, two days after the final vote on McCarthy, the Gazette building burned in what was called one of the Little Rock’s “most stubborn” fires. The alarm was sounded about 11 a.m. Saturday, Dec. 4, as Christmas shopping was underway and the Sunday edition of the paper was in the works. The damage to the building was an estimated $150,000 worth. The Gazette editor wrote in the Dec. 5 paper that “this edition of the Gazette is a monument to the courage, devotion to duty, and kindness of many people.” The First National Bank offered its new building to the news department, allowing operations to continue “almost without interruption,” and the editor praised all the employees of the Gazette “who worked under the most adverse circumstances to produce” that day’s edition.

As staff writer Wes Pruden wrote, “The Old Lady had all the attention a gal could want yesterday.” 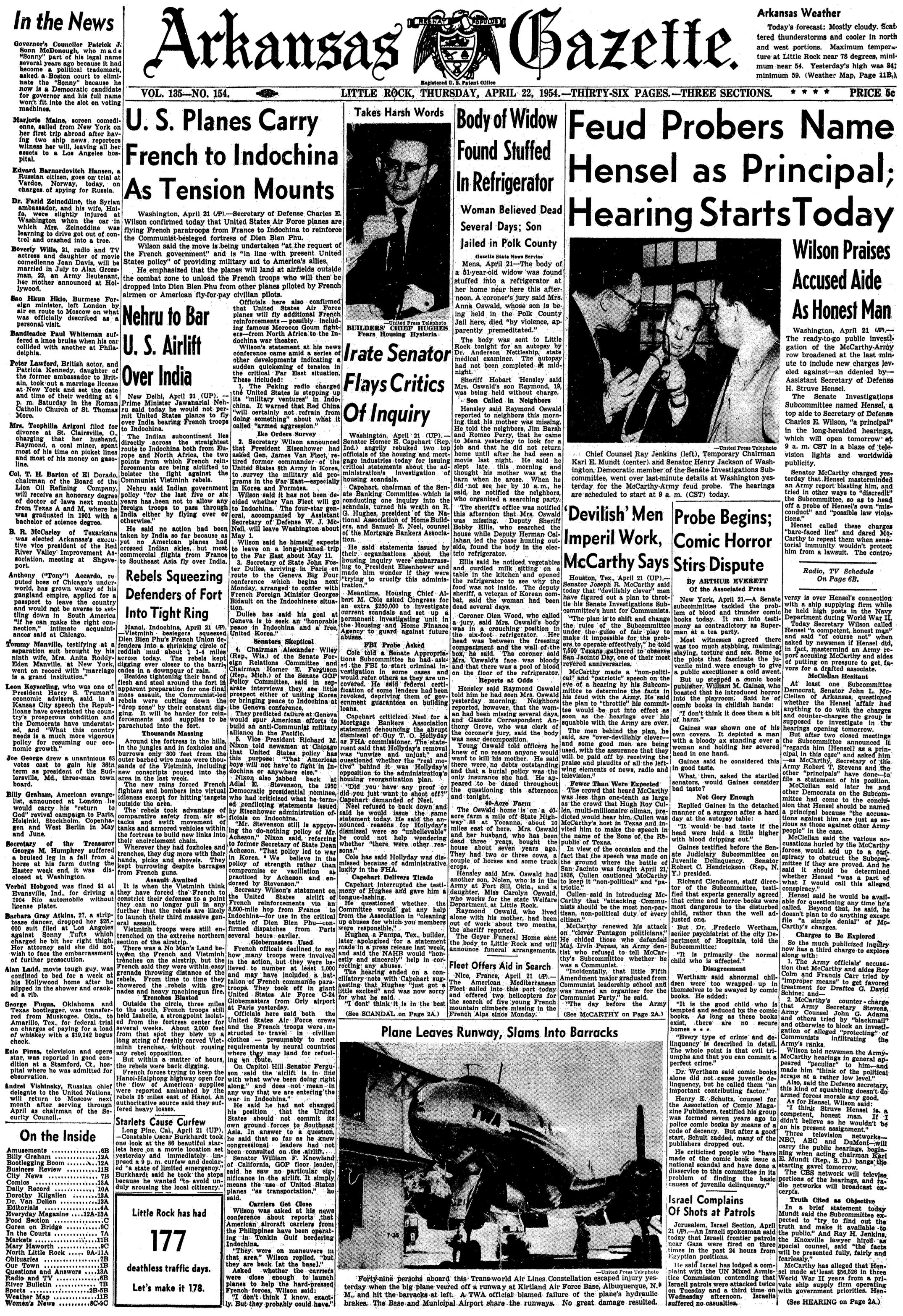