The monster that was polio might feel like a ghost story today, but this viral disease was terrifyingly real. As it emerged in the American populace from the 19th through the 20th centuries, outbreaks grew increasingly deadly. Poliomyelitis killed or crippled thousands of healthy children and adults, overnight.

For three-fourths of infected people, it was nothing, a few aches; and so they went about their lives, spreading contagion. Polio is an enterovirus spread thorough unsanitary behavior. It enters through the mouth, spreads into the nervous system from the gut and is shed through the intestines. The worst outcome — death by paralysis of the muscles used for breathing — was rare; but among those who experienced paralysis, only about one in 10 fully recovered, according to the Centers for Disease Control and Prevention.

Early theories of polio’s origins made household pets, swimming pools and overexertion suspect. In 1913, Dr. W.E. Wisdom of De Queen and Dr. E.W. Saunders of St. Louis decided that polio was a flyborne disease originating with limberneck chickens (chickens infected with botulism). In June that year, the Arkansas Gazette reported that more flyswatters had been sold in De Queen than ever in the history of the county.

During an epidemic that killed 2,000 in New York City in 1916, news of four cases of “infantile paralysis” at Memphis spurred the Little Rock City Council to consider quarantining that whole city — refusing to let passengers from there get off the train without health certificates. The mayor’s health panel decided against that.

Publicity surrounding the illness of Franklin D. Roosevelt, a rising politician in 1921 whose legs were paralyzed by polio at his lakehouse, threw suspicion on bodies of water. Long after chlorination became standard practice in the 1930s and ’40s, pools shut down during polio outbreaks.

According to the Central Arkansas Library System Encyclopedia of Arkansas, from a handful of cases in the state in 1920, by 1930 there were almost 80. But 344 cases erupted here in 1937. During that outbreak, the encyclopedia recounts, Lonoke and Des Arc prohibited any child younger than 16 from walking city streets. That year, a new State Welfare Department’s Crippled Children’s Division recruited doctors trained to treat polio-withered limbs.

In 1949 there were 992 cases of polio in Arkansas. The American Red Cross sent nurses. At St. Vincent Infirmary in Little Rock, the iron lung, an artificial respirator, kept patients breathing when their diaphragms and intercostal muscles were paralyzed — temporarily or permanently.

Another massive outbreak terrorized the nation in 1952, with 57,879 known cases nationwide, 3,145 deaths and thousands of victims left with permanently disability.

Then came immunization. This Page 1 of the April 13, 1955, Gazette reports on the vaccine that began a 25-year scientific and public health crusade that made the United States a nation without new cases of polio. 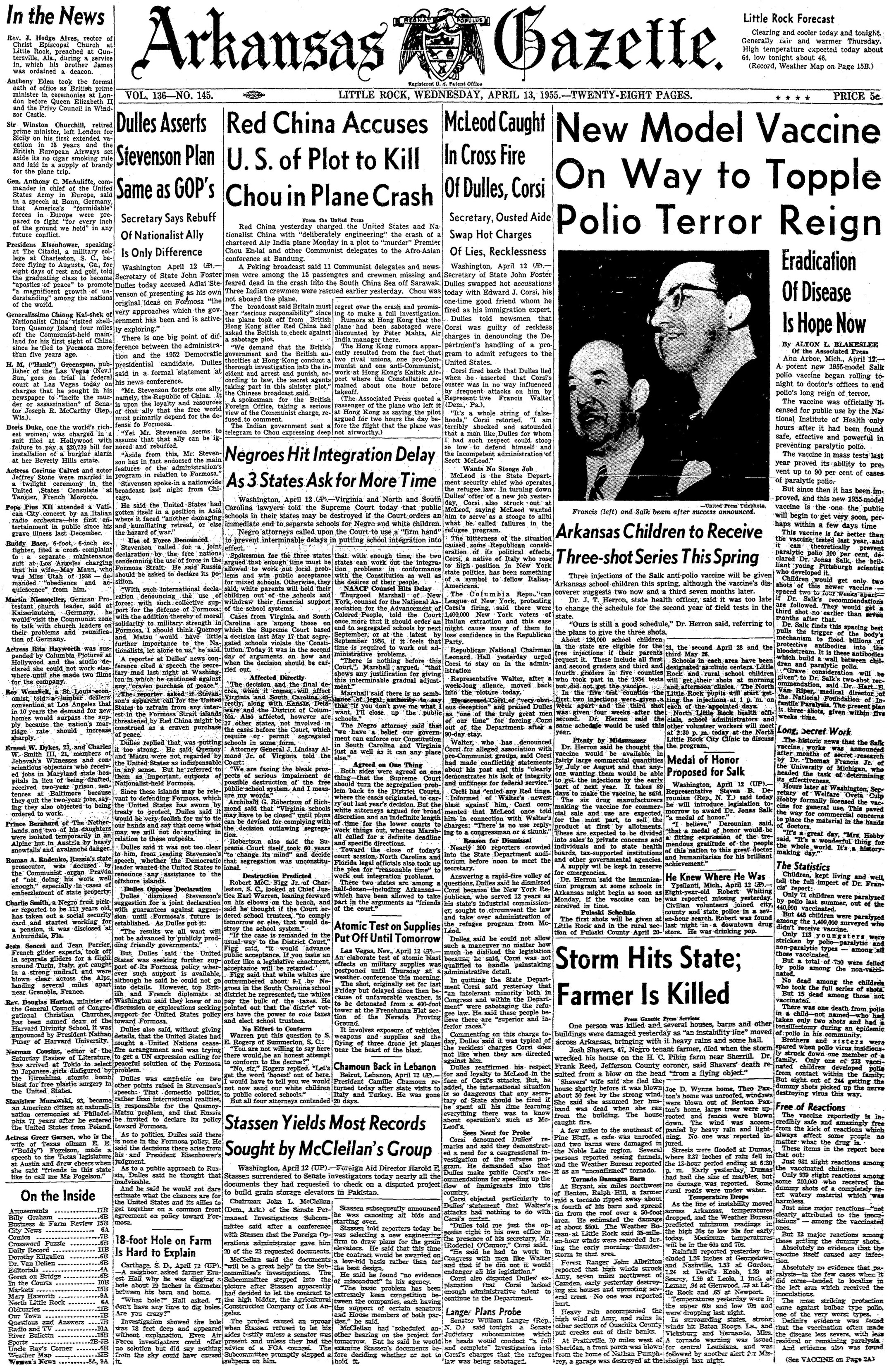