International crises and President Dwight D. Eisenhower’s response led this Page 1 of the Nov. 5, 1956, Arkansas Gazette.But right beside the Soviet oppression of freedom-seeking Hungary and the British and French attempt to take control of the Suez Canal from Egypt and then keep it for themselves, a front-page editorial laid out recommendations to Arkansas voters for the next day’s general election.

None of them concerned Eisenhower’s bid for re-election over the Democrat Adlai Stevenson. At the top of 13 items, the Gazette called for replacing Little Rock’s mayor and 10 paid aldermen with seven unpaid city directors, elected at large, who would then hire a professional city manager.

That fall, a Pulaski County Grand Jury had reported that Little Rock Mayor Woodrow Wilson Mann’s administration was ineffective and corrupt in the face of ward politics and “bossism” in city departments.

Speaking for a businessmen’s group, the Good Government Committee, the Gazette campaigned hard for change, as did its rival the Arkansas Democrat and city TV stations.

The Good Government Committee was founded by J.N. Heiskell, Gazette owner and publisher; August Engle, editor of the Arkansas Democrat; former Mayor J.V. Satterfield, president of First National Bank; and Stonewall Jackson Beauchamp Jr., a businessman connected to Arkansas Power & Light. According to the Central Arkansas Library System Encyclopedia of Arkansas, the committee’s 150 members came from the Chamber of Commerce and included a number of segregationists who did not like the coalition of black voters and unionists that had put Mann in office.

Besides many editorials, the Gazette ran an eight-part series in favor of city manager government. For instance, Nov. 2, staff writer Ray Moseley recounted a case that exemplified the “mess” at City Hall: In July, against the mayor’s wishes, the purchasing agency known as the Board of Public Affairs voted to buy 14 garbage trucks from International Harvester for $152,000 and 11 trade-ins. But the head of city sanitation said two garbage truck salesmen had tried to bribe him. The mayor tried to block the purchase until the grand jury could investigate, but the city council voted to buy the trucks at once.

The mayor then vetoed the sale ordinance and went on TV to ask for public support. The council overrode the veto anyway.

A businessman filed suit in chancery court to block the purchase.

The chancellor upheld the council.

On Nov. 6, Little Rock voted 2-to-1 to drop mayor-council government in favor of a city manager system.

The Good Government Committee freely admitted that a 1921 state law authorizing city manager governments had fatal flaws, but they promised that the Legislature would fix those when it met in 1957. Which, the encyclopedia article says, did happen. But as 1957 advanced, the business-and-newspaper coalition behind the Good Government Committee could not survive its members’ differing opinions over the court-ordered integration of public schools. 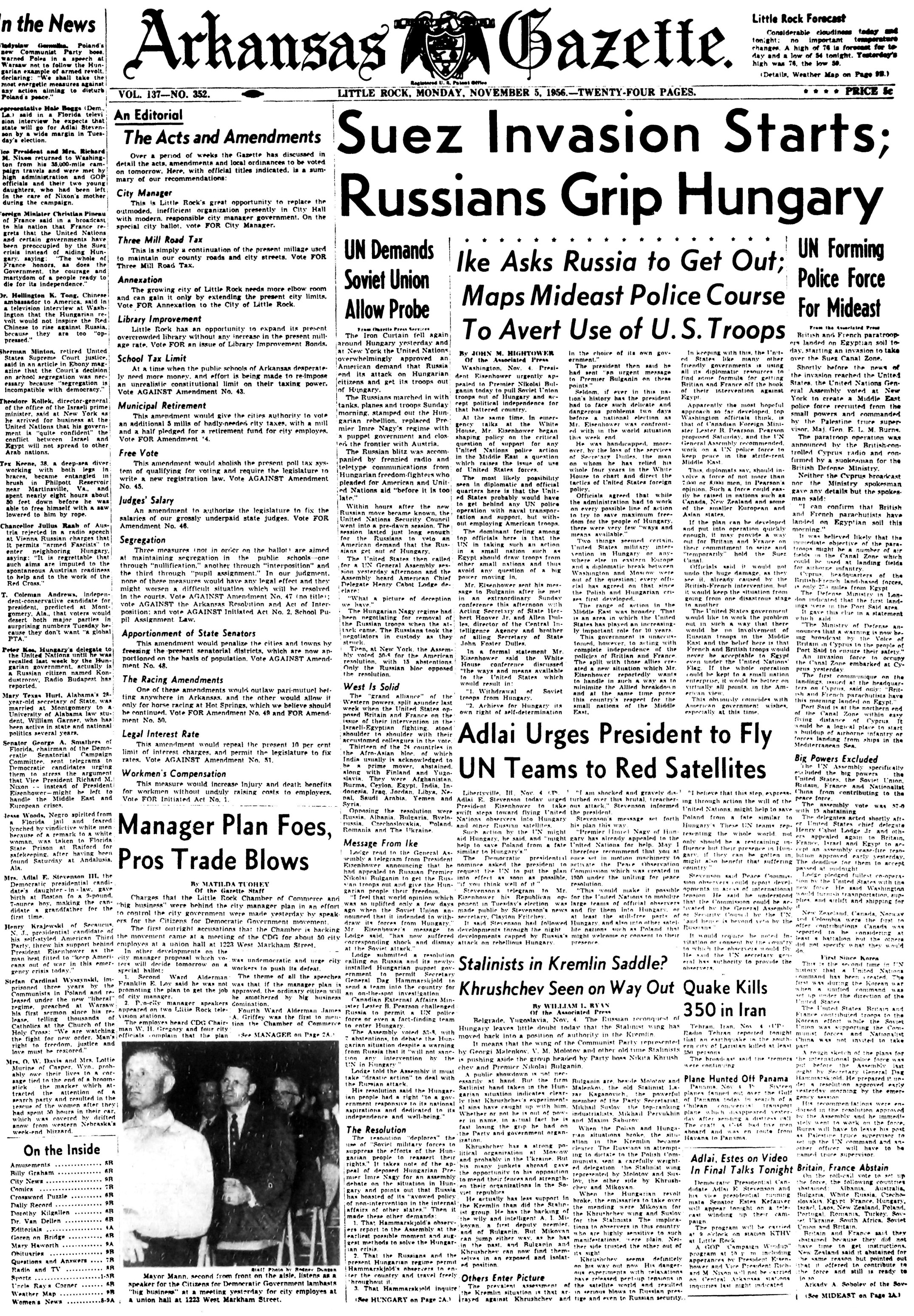