Once upon a time in Little Rock, nine young black scholars finally asserted their right to enter Little Rock Central High School under federal court orders long in place but long resisted by white Arkansans determined to keep schools segregated. The violent reaction to this brave, simple act would lead to intervention by soldiers of the Army 101st Airborne Division called up at President Dwight D. Eisenhower’s command. “Ike Clears Way To Send Troops,” the lead headline of the Arkansas Gazette proclaimed in huge type on Page 1 Sept. 24, 1957.

But first, on Monday, Sept. 23, with Gov. Orval Faubus out of the state at a national governors conference and Arkansas National Guard troops, which at Faubus’ command had barred the way, finally forced by federal edict to stand down, the students who later would be known as the Little Rock Nine “slipped in a side door to attend classes,” the Gazette reported. They would be escorted out by the police three hours later as chaos, violence and anguish unfolded in the shadow of the school.

“A mob of 300 persons pounded out its hate with feet and fists a block from the south entrance of Little Rock Central High School at 8:48 a.m. yesterday while the School for the first time in its 30-year history” received black students, according to an article headlined “Mobs at Both Ends of School Kick, Beat, Chase and Yell.”

The Little Rock police force was alone in trying to keep order. Officers had their hands full as “a mob of about 1,000 white persons went on a rampage of fighting, cursing and crying.”

Eisenhower, in a statement issued from the sun porch of his vacation quarters at the U.S. Naval Base at Newport, R.I., blasted “the disgraceful occurrences” in Little Rock and announced that he would “use the full power of the United States, including whatever force may be necessary to prevent any obstruction of the law and to carry out the orders of the federal court.”

Faubus responded that Eisenhower couldn’t send troops without his request, adding, “I don’t plan to make any such request.” But he agreed it was “a sad day when you can attend [school] only under armed guard” and urged the people of Little Rock to help restore calm.

Faubus felt the sting of criticism over the events of the day. Republican Gov. Theodore McKeldin of Maryland said Faubus “wrote the book, set the stage and directed the play for today’s unhappy occurrences.” The New York Herald-Tribunereiterated earlier statements from Faubus charging that Little Rock Mayor Woodrow Mann and the Gazette were trying to “crucify” him.

The soldiers began their Central High duty Sept. 25. A photograph by Larry Obsitnik on that day’s front page famously showed some of the 1,200 “battle-equipped paratroopers” rolling across the Broadway Bridge the night before under a billboard proclaiming “Who will build Arkansas if her own people do not?”

Faubus said in a televised address that Little Rock “was now an occupied territory.”

The “Crisis at Central High” had only begun. Little Rock’s high schools would be closed the entire 1958-59 school year as factions seeking change continued to struggle against those intent on segregation. 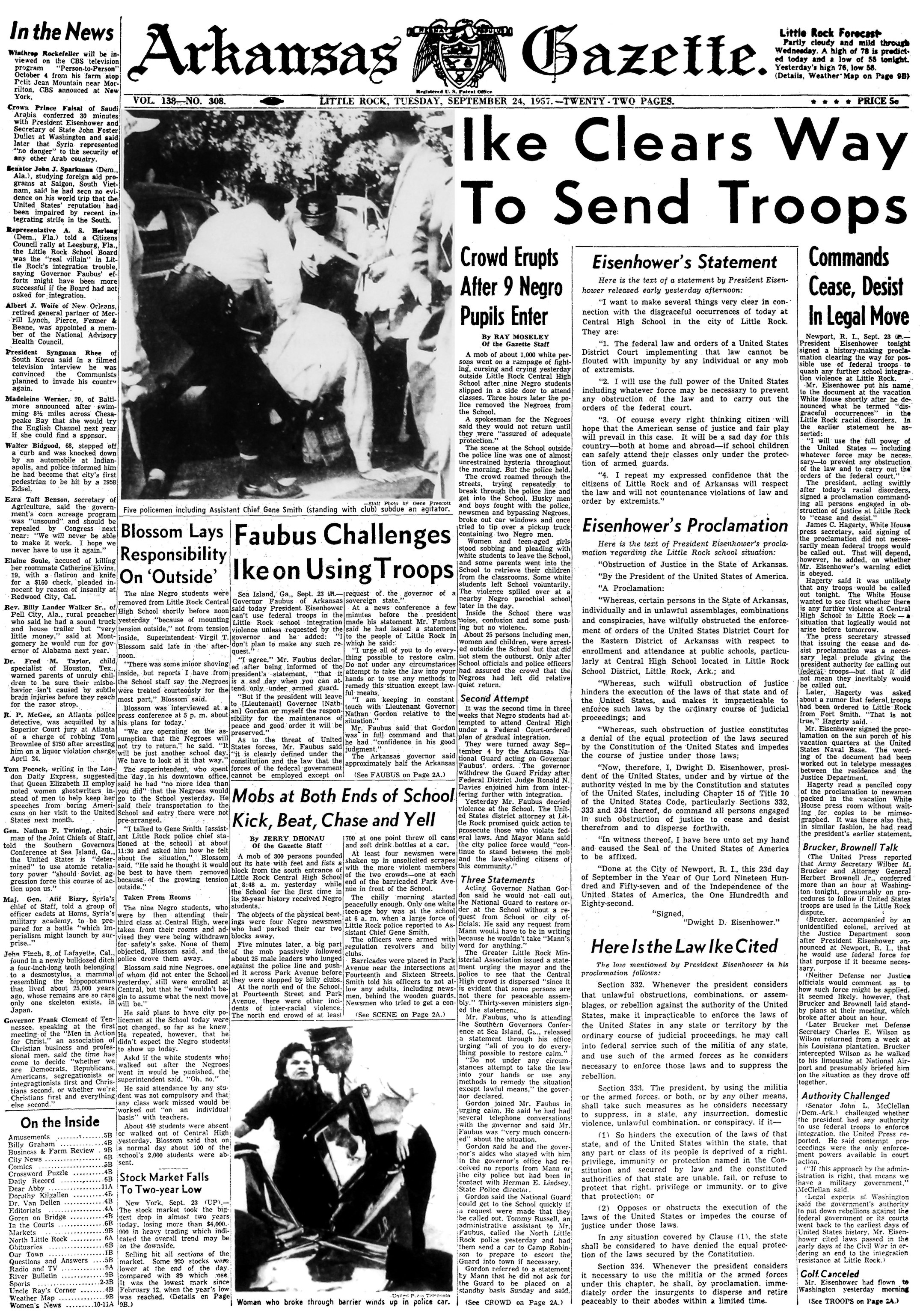