Newspapers across the nation and beyond chronicled the events that transpired in Little Rock 62 years ago this month, as nine black students were first barred, and — several weeks later — escorted into Little Rock Central High School under the protection of federal troops, making the school among the first in the nation to desegregate.

The action was the culmination of efforts toward desegregation in the years after the U.S. Supreme Court’s 1954 ruling in Brown v. Board of Education that segregation in public education institutions was unconstitutional — a time of advocacy, legal challenges, racial tension and violence. The Central High integration crisis underlined the struggles between state and federal authority, sparked national debate and put Little Rock on the map as an international symbol of racism and civil rights in the United States.

The Arkansas Gazette and its executive editor, Harry Ashmore, would go on to make history the next year when both the paper and Ashmore won Pulitzer Prizes, as detailed on Page 1 of this May 6, 1958, edition.

The Pulitzer committee cited the Gazette for “demonstrating the highest qualities of civic leadership, journalistic responsibility and moral courage in the face of mounting public tension during the school integration crisis of 1957,” while Ashmore was recognized for the “forcefulness, dispassionate analysis and clarity” of 11 editorials he wrote about the conflict.

The front-page article noted that it was the first time that a newspaper had won for public service while its editor won for writing about the same news.

An observation was made in Pulitzer’s Gold: A Century of Public Service Journalism by Roy Harris Jr. that the Pulitzer awarded that year was the only medal given to a Southern newspaper during desegregation in the region, “making the joint recognition for the newspaper and Ashmore — in public service and editorial writing — all the more significant in journalism history.”

Harris adds that as a result of Ashmore’s editorials, subscribers boycotted the Gazette while advertisers leaned on the paper, and that year circulation dipped from 100,000 to 83,000 subscribers.

Ashmore’s friendship with Orval Faubus, the Arkansas governor who dispatched members of the Arkansas National Guard to prevent violence he claimed would occur — and prevent integration — dissolved over these editorials, including one titled “The Crisis Mr. Faubus Made.”

Faubus would go on to win re-election by a landslide in November.

The Associated Press also received a Pulitzer for its coverage of the crisis, and Arkansas Democrat photographer Will Counts was a finalist for his shot of students jeering 15-year-old Elizabeth Eckford.

Ashmore would leave the Gazette in 1959 to join the Center for the Study of Democratic Institutions, a California think tank, while concurrently serving as editor-in-chief of the Encyclopedia Britannica, according to the Central Arkansas Library System Encyclopedia of Arkansas. His first book, An Epitaph for Dixie published in January 1958, would be joined by eight more over the years, as he continued to write about civil rights. He died in 1998. 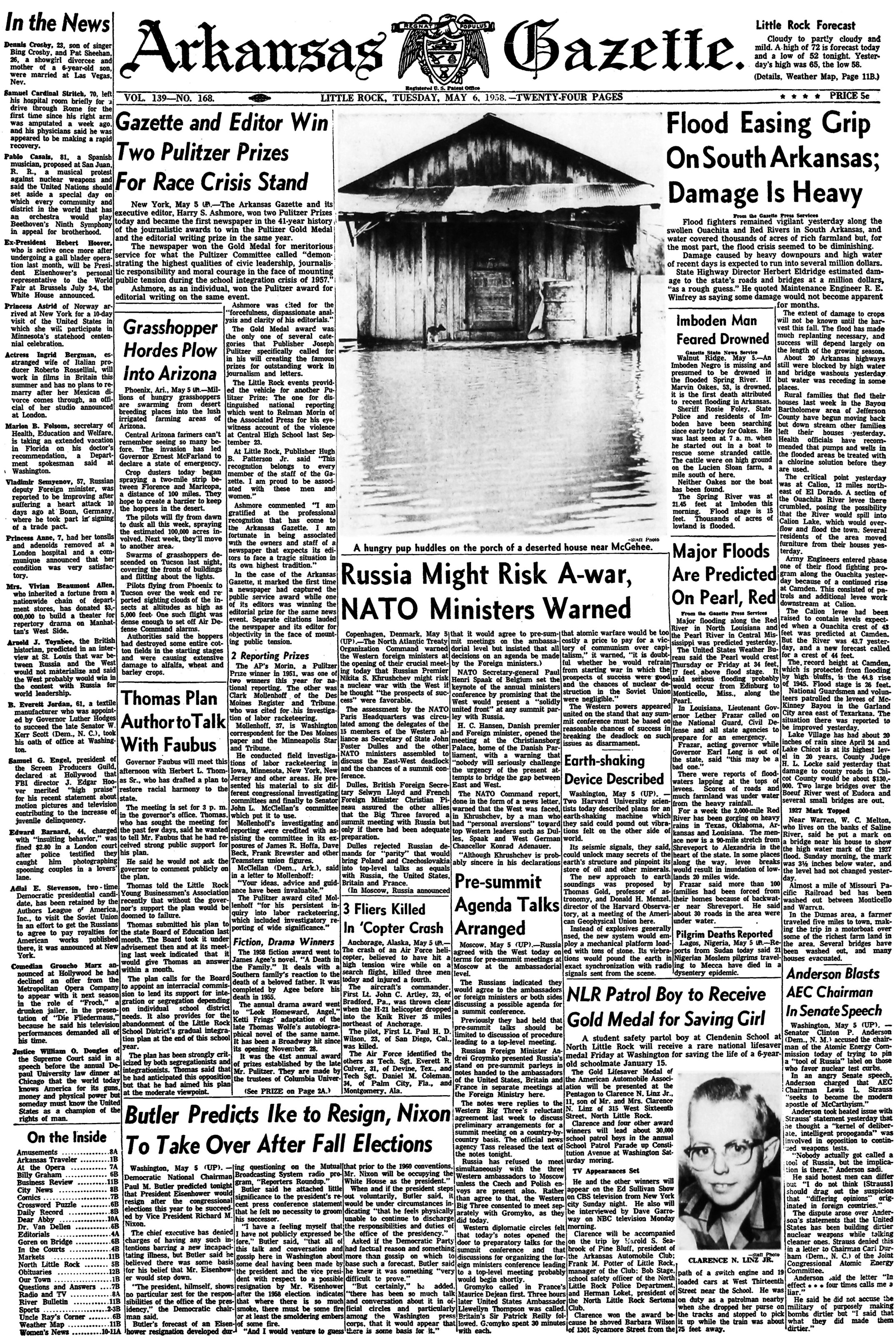