As day dawned over Little Rock on Thursday, March 31, 1960, a B-47 bomber passing over the capital city ripped itself apart high in the clear, cool sky. Its fiery remains descended in a two-mile diagonal that slashed from Allsop Park through the Hillcrest and Capitol Hill neighborhoods to the intersection of Maryland Avenue and Summit Street.

The fuselage buried itself 6½ feet in a flaming, 35-foot crater at that intersection — 750 yards from the back of the state Capitol.

The concussion blew some sleepers out of bed and startled others awake across town. One was Arkansas Gazette reporter Bill Lewis. He described the experience in 2000 during an oral history recorded for the Gazette Project at the University of Arkansas Pryor Center for Arkansas Oral and Visual History. Lewis heard a “big boom” while he was in bed. Curious, he padded to his back door and saw in the distance “sort of a pink puff of smoke” in clouds. But it wasn’t clouds.

“I didn’t know what it was, so I went back to bed,” he said, “and the phone rang almost immediately.” City Editor Bill Shelton was on the line with his day’s assignment: “Get on it.”

The results of reporting by Lewis, Patrick Owens and other staff members begin on this Page 1 of the April 1, 1960, Gazette. They document burned cars, damage to a church and the Arkansas Children’s Home, discoveries of personal effects from the crew, homes consumed by flames, choking black clouds and eerily glittering trees festooned with tinsel-like chaff.

But worse were the five deaths: two civilians on the ground and three of the bomber’s four occupants: the pilot, Capt. Herbert Aldridge; Lt. Col. Reynolds S. Watson, the navigator; and SSgt. Kenneth E. Brose, an Air Force civil engineer. In service at Little Rock Air Force Base as part of the Strategic Air Command, the B-47E only had seats for a standard three-man crew. Brose had crouched on the floor.

The co-pilot, 1st Lt. Thomas G. Smoak, survived with severe injuries and burns. His parachute tangled in trees, and residents rushed to cut him him down.

One airman’s body was found outside 211 Colonial Court, the home of Mr. and Mrs. Andrew L. Clark. Mrs. Clark, 62, died in the home, which burned to the ground when a large part of the jet, including another airman, smashed the house. The third airman and a burned parachute were found on the grounds of Pulaski Heights Junior High School, by neighborhood children.

Jimmy Hollabaugh, 29, died as his mother’s home at 1920 Maryland Ave., which is now Ninth Street, burned.

Travis Ratermann, Arkansas Historic Preservation Program survey historian, has mapped where every known piece of debris from the crash was found. The Pulaski County Historical Review published his research in spring 2018 under the title “A Living Hell.” He writes that during 15 years in service, 203 B-47s crashed, claiming 464 lives — none in combat.

In his oral history, Lewis mentioned that the pilot’s widow, a chain-smoking Texan with two sons to support, applied for a job at the newspaper after the crash. She had no writing experience, but Managing Editor A.R. Nelson hired her as an assistant for food, home and garden editor Mildred Woods. When Woods retired in 1965, Harriett Aldridge became Gazette food editor, a position she would hold for the ensuing 26 years. 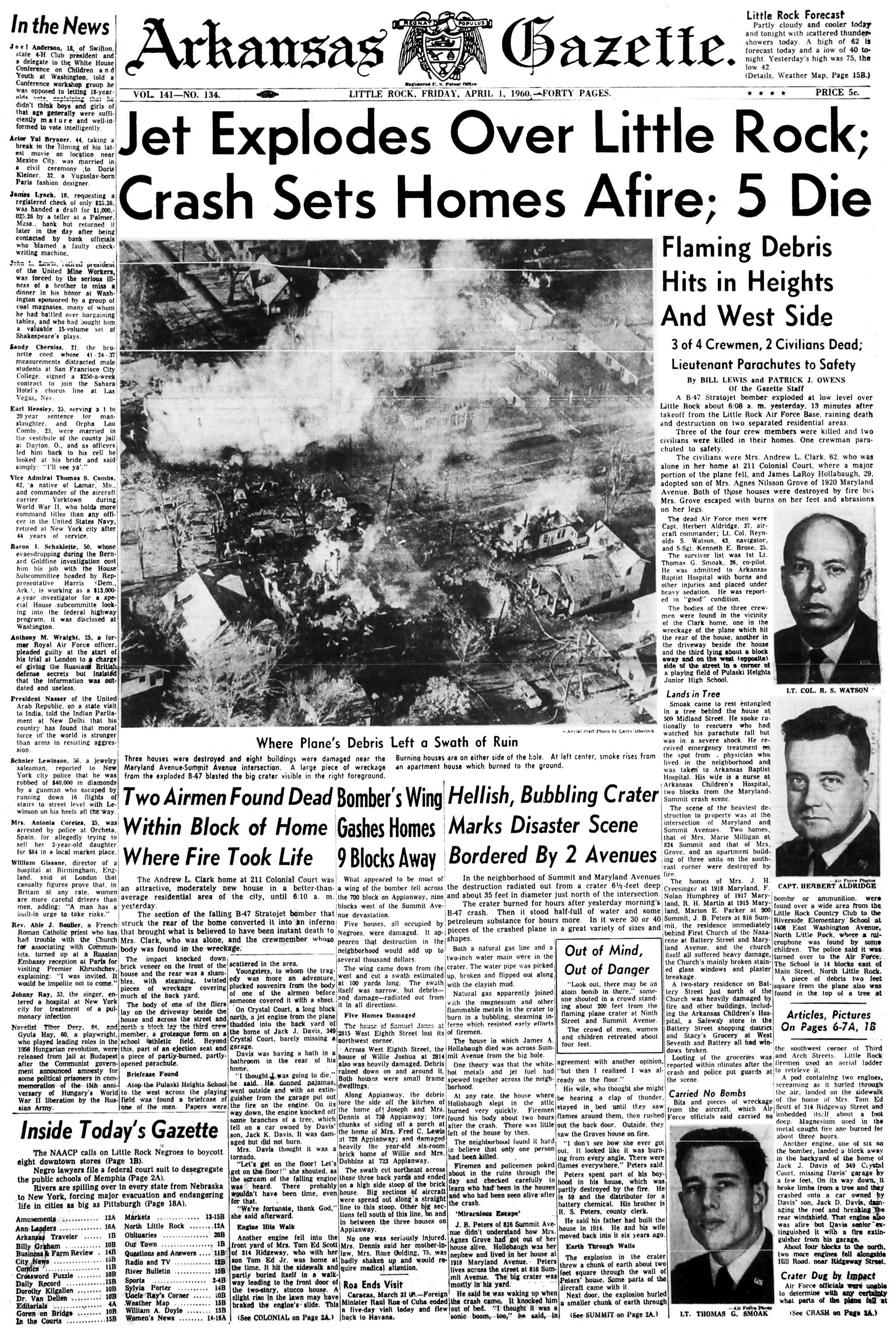