Here is the front page of the Arkansas Gazette from Nov. 23, 1963. It reports the assassination of President John Fitzgerald Kennedy.

For readers who remember the day, it remains a stark landmark in time overshadowing other events of that year — a historic nuclear test ban treaty, debate over whether to dam the Buffalo River and sell Bathhouse Row, the phasing out of B-47 bombers and their replacement by B-58 Hustler jet bombers at Little Rock Air Force Base, Arkansas service members’ participation in the Army’s dramatic exercise Operation Big Lift in Europe … As Gazette Washington correspondent Ned Curran wrote as 1963 drew to a close: “And then in an instant on November 22, the whole year was bathed in blood and horror and incredible tragedy.”

Nov. 22 became a story told over and over and over and over … and over — like the Zapruder film that’s replaying endlessly among radio waves that radiate from our planet, beaming ever outward into the vast silence of space. And yet there are not enough facts. For Arkansans who met the man when he visited the state in the month before he died, his murder remains an important, unfathomable mystery.

On Oct. 3, 1963, he spoke to 10,000 at the dedication of Greer’s Ferry Dam at Heber Springs and also to a crowd of 40,000 at the State Fair in Little Rock. At Greer’s Ferry, he predicted prosperity for the state. Gov. Orval Faubus spoke, too. He complained that the federal government should stick to projects like the dam and not impose “civil wrongs” on the state in the guise of civil rights.

At the fair, Kennedy replied obliquely, noting how the state benefited under President Franklin Delano Roosevelt’s New Deal: “And those who wish to turn the clock back, those who wish to stand still, those who wish to end the partnership which exists between this state and the national government and every other state should just read the history of Arkansas from 1919 to 1935.”

The Gazette printed the texts of all three speeches.

Kennedy was born in 1917 and died as many years ago as he lived upon this earth, but he is frozen in history in the vigor of his relative youth. Faubus’ father, Sam, wrote a letter that Sen. J. William Fulbright read into the Congressional Record on Dec. 19, 1963: “I am stunned and bewildered. I don’t seem to be able to realize that the bright-eyed, sandy-haired young man that greeted me with a smile and a warm handshake and told me he had received a nice letter from my daughter, Bonnie, in California only a few days ago, now lies murdered by the hand of an assassin. … Children will read about John Fitzgerald Kennedy in history books for generations to come and men believing in liberty, justice and freedom will revere his name throughout the entire world.”

That letter, too, was reported in the Gazette. 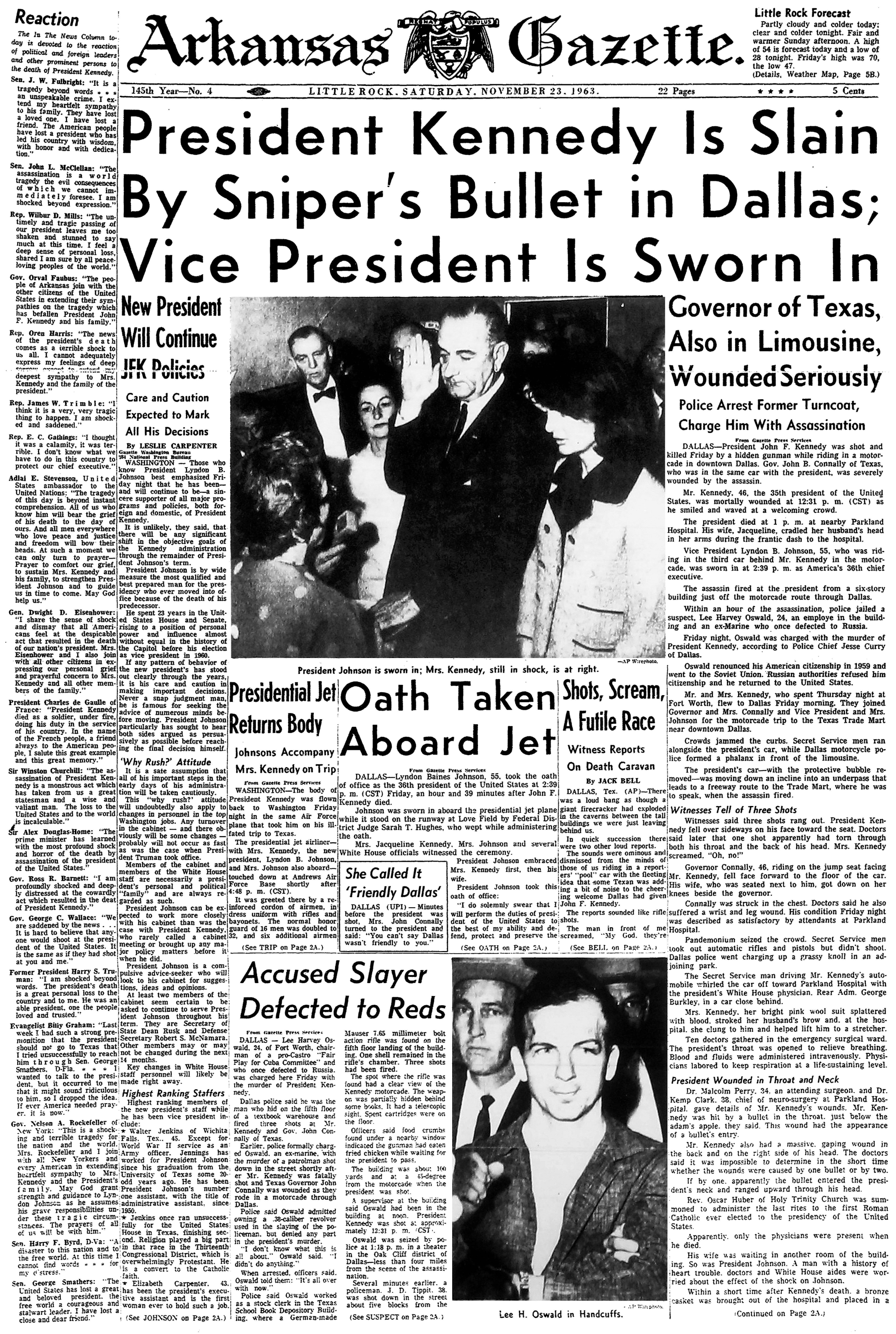