On Aug. 2, 1964, the USS Maddox, on patrol off the coast of communist-controlled North Vietnam, was attacked by three North Vietnamese torpedo boats.

The U.S. destroyer C. Turner Joy was ordered to join the Maddox in the Gulf of Tonkin, and President Lyndon B. Johnson made clear that any further aggression would not be tolerated.

On Aug. 4, the Maddox and the Turner Joy reported more attacks from torpedo boats, reports whose authenticity has been repeatedly questioned. Articles from the U.S. Naval Institute highlight disparate views, one suggesting that the alleged attack was essentially the result of storm interference and did not occur, while another lends credibility to the two destroyers’ crews who were on duty that night, who swore there were enemy torpedo boats and torpedo wakes for the reading.

Johnson also requested that Congress pass a resolution which, as reported on Page 1 of the Aug. 8 Gazette, would “strengthen his hand in dealing with Communist aggression in Southeast Asia.”

In a display of the “unity of all Americans” called for by Johnson, Congress passed the resolution Aug. 7, but not without a few expressions of uncertainty or outright opposition.

During the Senate’s nine-hour debate, Sen. Wayne Morse (D-Ore.) argued that the resolution was essentially “a predated declaration of war,” and suggested that the U.S. attacks on the North Vietnamese seaports “constituted an act of war — not an act of self-defense.”

The Gazette quoted Arkansas Sen. J. William Fulbright, chairman of the Senate Foreign Relations Committee, as acknowledging that senators “all have our apprehensions about what may happen” but had to rely on the decisions of the president. Fulbright added that the resolution was “calculated to prevent the spread of war rather than to expand it.”

Some senators thought a unified front was the priority, even if they were not in full agreement. George Aiken (R-Vt.), also a member of the Foreign Relations Committee, was one of several who thought the language of the resolution was “unnecessarily broad” and that it could be used to authorize “direct participation by American troops in South Vietnam.” Aiken stated that he would vote in favor of the resolution but “with misgivings.”

Although Ernest Gruening (D-Alaska) closed the Senate debate expressing his concern the resolution would entail “sending more boys into combat in a war that is not our war,” the resolution passed in the Senate, 88-2.

In the House of Representatives, after 40 minutes of debate the resolution passed unanimously, 416-0.

According to the State Department’s Office of the Historian, Aiken’s misgivings would prove to be a prediction, as Johnson did indeed use the Gulf of Tonkin Resolution to escalate the coming war in Vietnam without returning to Congress for an official declaration of war. 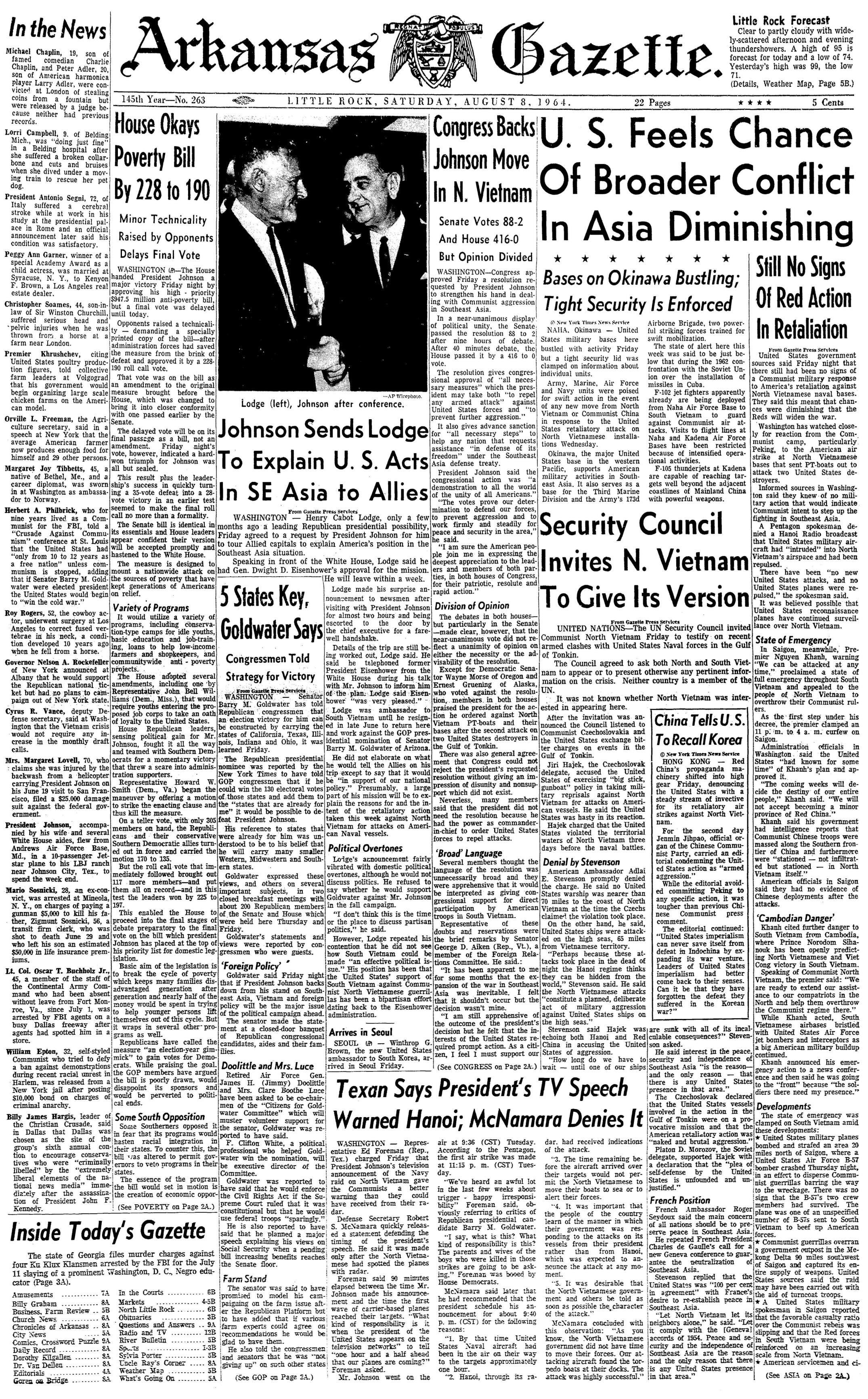