New Year’s Day, 1965, stands as one of the University of Arkansas Razorbacks’ proudest moments.

A perfect 10-0 regular season behind them, the No. 2-ranked Hogs were locked in a tough Cotton Bowl contest in Dallas. Scarcely more than nine minutes remained in the game with Arkansas trailing 7-3 against “Nebraska’s beefy Cornhuskers,” as Arkansas Gazette sportswriter Orville Henry called them in his report on this Page 1 of the Jan. 2, 1965, Arkansas Gazette.

Frank Broyles’ team proved up to the task, marching 80 yards in nine plays as quarterback Fred Marshall, who had been struggling all day, completed five of five passes for 61 yards and “tore free from a blitz for a mighty 10-yard advance” before handing off to tailback Bobby Burnett to “put over the tell-tale points on a lunging 3-yard burst.” The extra point was good, as “placement specialist Tom McKnelly boomed the final point through the posts” with 4:41 to play. Later in his recap of the game, Henry described the drive in meticulous play-by-play detail and summed it all up: “And thus arrived one of the Razorbacks’ monumental touchdowns for all time.”

The well-conditioned Hogs held on for a 10-7 victory, an 11-0 record as “a standing-room-only crowd of 75,504 — about 12,500 from Nebraska and over 30,000 from Arkansas — rocked this old grid palace to its foundations.” Broyles and the entire Razorback nation laid claim to a national title that polls by The Associated Press and United Press International had bestowed on the Alabama Crimson Tide at the end of the regular season.

Later New Year’s Day, Alabama went on to lose to Texas in the Orange Bowl in a 21-17 upset, fueling Arkansas’ argument. The Razorbacks had also defeated three other bowl teams — Tulsa, Texas Tech, and most satisfyingly and importantly, Texas.

The AP and UPI didn’t conduct post-season polls at the time, but other, smaller polls did. The Football Writers Association of America and the Helms Athletic Foundation ranked the Hogs No. 1, and Arkansas was awarded the FWAA’s Grantland Rice Trophy, which it considered emblematic of the national championship.

Alabama still claims the title to this day.

But Arkansas fans remain proud of a game that, as Henry noted, was full of heroics, including “Benton’s Bobby Nix, a great punter all day, with or without the wind.” Of the defense, which “saved the day,” Henry wrote, “Jim Williams and Loyd Phillips, the terrific tackles, and Ronnie Caveness and Ronnie Mac Smith, the razor-sharp linebackers, smeared” Nebraska’s running backs to get the ball back for the Hogs’ winning drive. Split end Bobby Crockett and wingback Jim Lindsey played key roles in that effort. Earlier, future Arkansas Coach Ken Hatfield had a key interception. 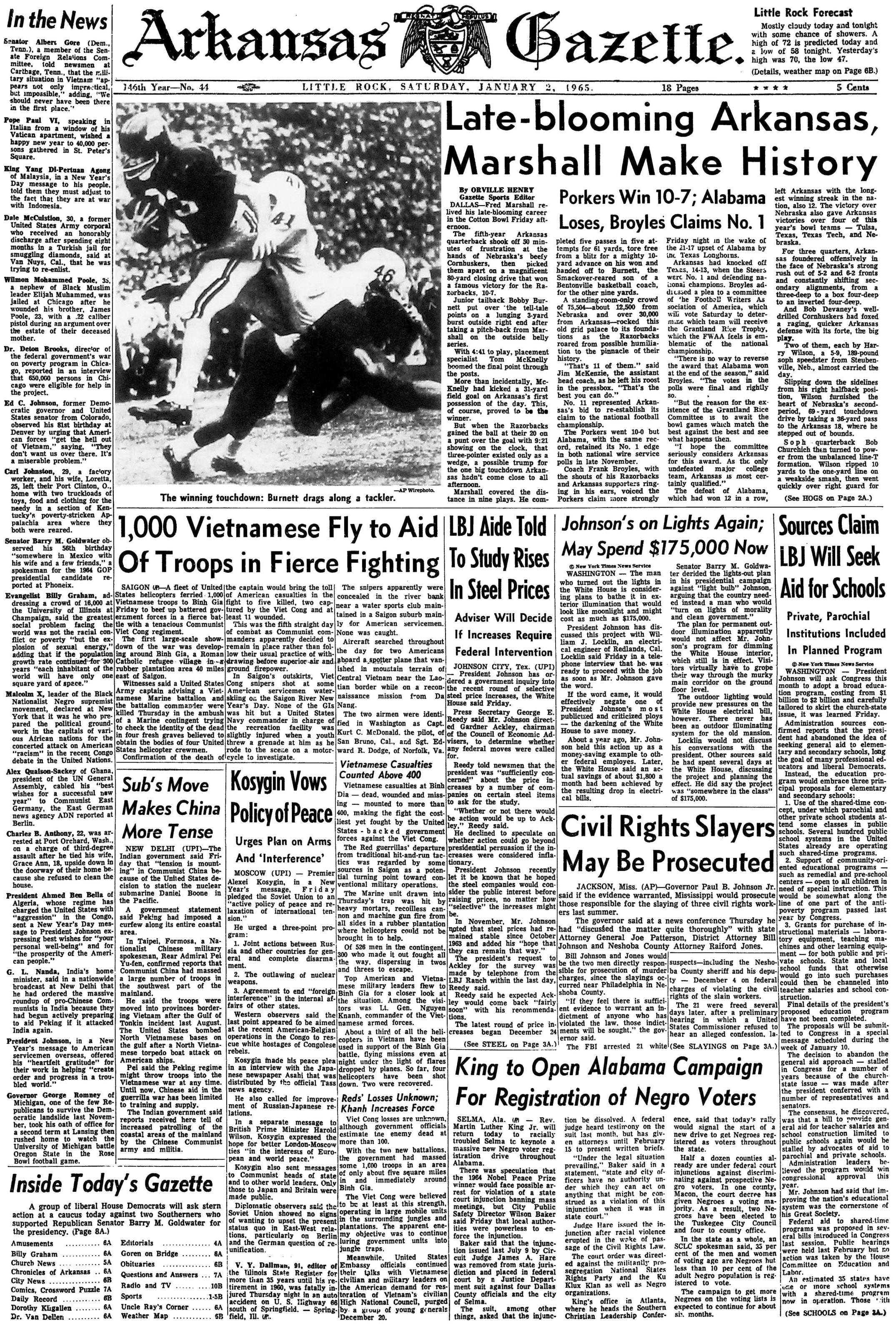