An Arkansas Republican Party whose long-withered shoots sprang up like spring grass below the feet of Gov. Winthrop Rockefeller was mowed down in the midterm elections of 1970.

As Ernest Dumas reported on this Page 1 of the Nov. 5, 1970, Arkansas Gazette, the state GOP pushed to take 36 seats in the state House and 10 in the Senate. Instead, they were lucky their one senator wasn’t up for re-election. Early returns showed that three of their five House seats were gone. GOP leaders blamed the loss on one personable Democrat: Dale Bumpers.

Having used TV ads to vault past seven primary rivals, including a comeback try by the six-term former Gov. Orval Faubus, Bumpers defeated Rockefeller in the governor’s race by a margin not quite so wide as early returns suggested, but plenty wide: 70,000 votes, or 62%, according to the Central Arkansas Library System Encyclopedia of Arkansas.

Voters also rejected a replacement for the Constitution of 1874. That was a surprise.

The proposed Constitution of 1970 had been 10 years in the making. It was supported by the Arkansas Farm Bureau Federation, newspapers and state leaders from both parties, including Rockefeller and former Gov. Sid McMath. More than a million copies were circulated so voters could read it. It would have lengthened gubernatorial terms from two to four years, allowed the creation of an intermediate appellate court, combined the auditor’s and treasurer’s offices, removed salary and tax caps on cities and reined in the power of county judges by drastically reducing the size of quorum courts (for instance, Pulaski County had 349 justices of the peace in 1970).

Nationwide, voters rejected GOP candidates for governor, giving the Democratic Party a majority of governorships for the first time since 1964. Analysts blamed those losses on a different personality: President Richard Nixon.

This page also reports a renegade analysis by one of the state’s most fascinating political observers, ever — Martha Mitchell of Pine Bluff, the wife of Nixon’s right-hand man and U.S. attorney general, John Mitchell. She told reporters at a fashion show in Washington that Republicans had defeated themselves by bickering like a bunch of Democrats. The “Mouth of the South” also played with a newfangled attache phone, a portable telephone that was the size of a briefcase and came in a briefcase.

Two years later, the administration would ham-fistedly suppress her boisterous truth-telling — about a break-in at the Watergate complex in Washington. She would be deserted by John, accused of alcoholism, locked in a hotel room and widely considered as mentally ill. Her mistreatment would inspire a bit of psychology parlance, “the Martha Mitchell effect” — misreading a patient’s justified beliefs as delusions because they seem bizarre. 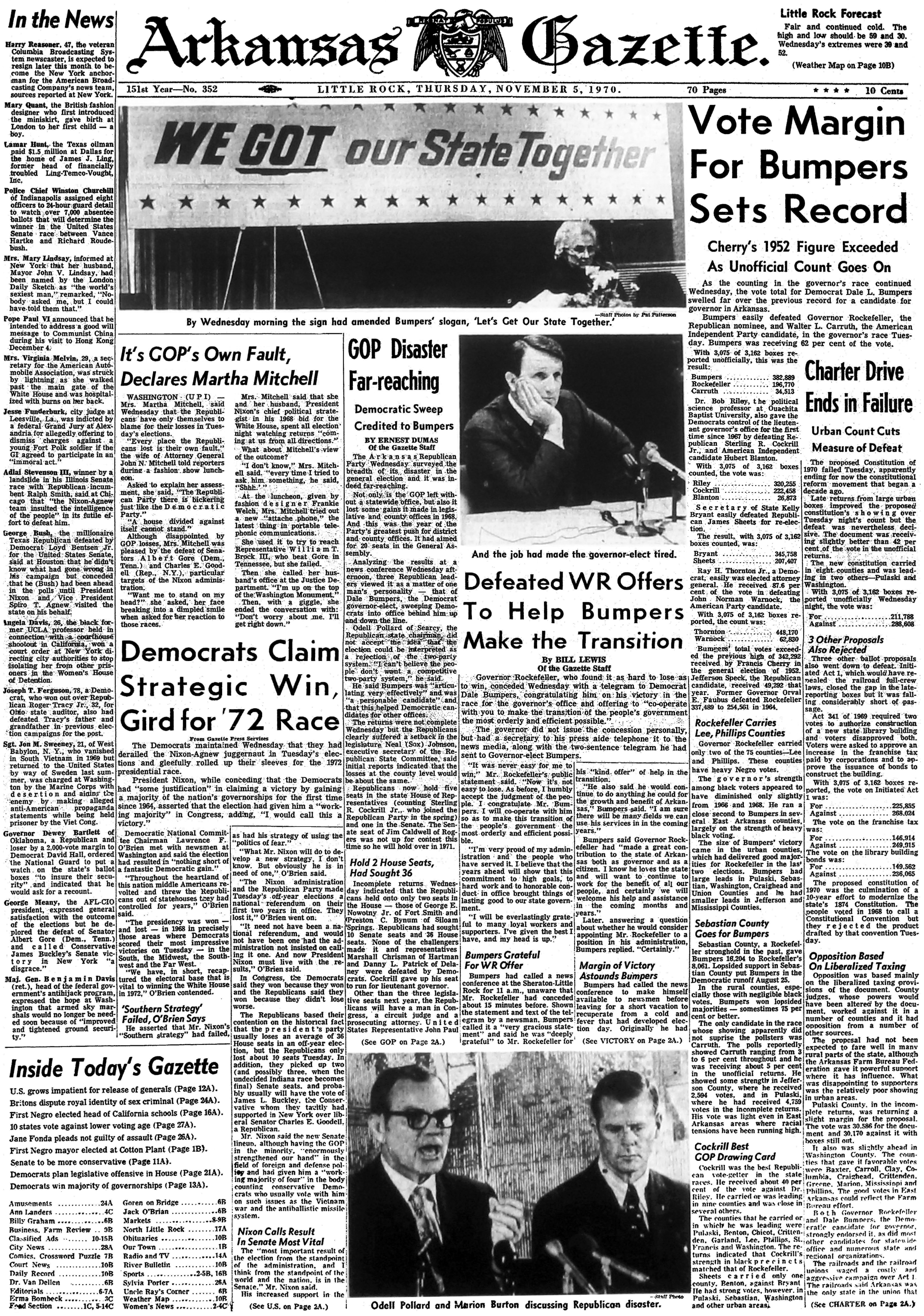