Page 1 of the Aug. 9, 1974, Arkansas Gazette documented the resignation of Richard M. Nixon — the only U.S. president to quit the nation’s highest office.

In an emotional, nationally televised address, he said, “I have never been a quitter, but as president I must put the interest of America first.” He said he no longer had enough support in Congress to lead, a fight for personal vindication would waste time, he didn’t want to subject the nation to the ordeal of an impeachment.

Already the nation had endured 17 months of ordeal — including televised Senate hearings — arising from election law violations during the 1972 presidential campaign. Best known among them was the Watergate affair, a bungled bit of political espionage ultimately traced to the Oval Office. By the day Nixon resigned, charges were still pending against 11 of the 50 men indicted in alleged crimes; 35 had been convicted or pleaded guilty; four had been acquitted or had their charges dropped. Twelve corporations had admitted giving illegal campaign gifts; one was acquitted and another waited trial.

Nixon retained a few staunch friends in Congress, and he invited them to meet him in the Cabinet room before his televised address. Among the mostly Southern and Republican leaders sat Arkansas Sen. John L. McClellan, a Democrat and chairman of the Senate Appropriations Committee. Other congressional powerhouses who opposed him, including Arkansans Sen. J. William Fulbright and Rep. Wilbur D. Mills, were not invited.

The first 14 pages of this Gazette were packed with related stories, including expert speculations about whether Vice President Gerald Ford, once in office as president, would pardon Nixon (he did), and reactions from Arkansans high and low.

Gov. Dale Bumpers, then Democratic nominee for the Senate, said the resignation proved the democracy was working very well. He called on all Americans to unite behind Ford. Democratic gubernatorial candidate David H. Pryor said Nixon “chose the only alternative under the circumstances. I’m glad he’s doing it now rather than waiting because he would merely prolong the agony.”

Democrat Brownie Ledbetter said she was disappointed Nixon didn’t admit to any wrongdoing.

Former Gov. Orval Faubus said, “Well, I thought his speech was magnanimous and he put — apparently — the interest of the country first, and no one could fault him for doing that.”

Lunch pail in hand, a worker waiting for the bus said, “I like the man and I like the work he’s done. I wish he could stay in there a whole lot longer.” Asked whether Nixon was treated unfairly, he paused and then said, “I don’t want to criticize anybody, but I think maybe so. I just feel real bad about it.”

A North Little Rock woman who had voted for Nixon also was sorry about his resignation: “I’d rather he were impeached.”

“He reminds me of a gangster,” opined a man on a street in eastern Little Rock. “Nixon’s the man who stole the country just like the Grinch stole Christmas.” 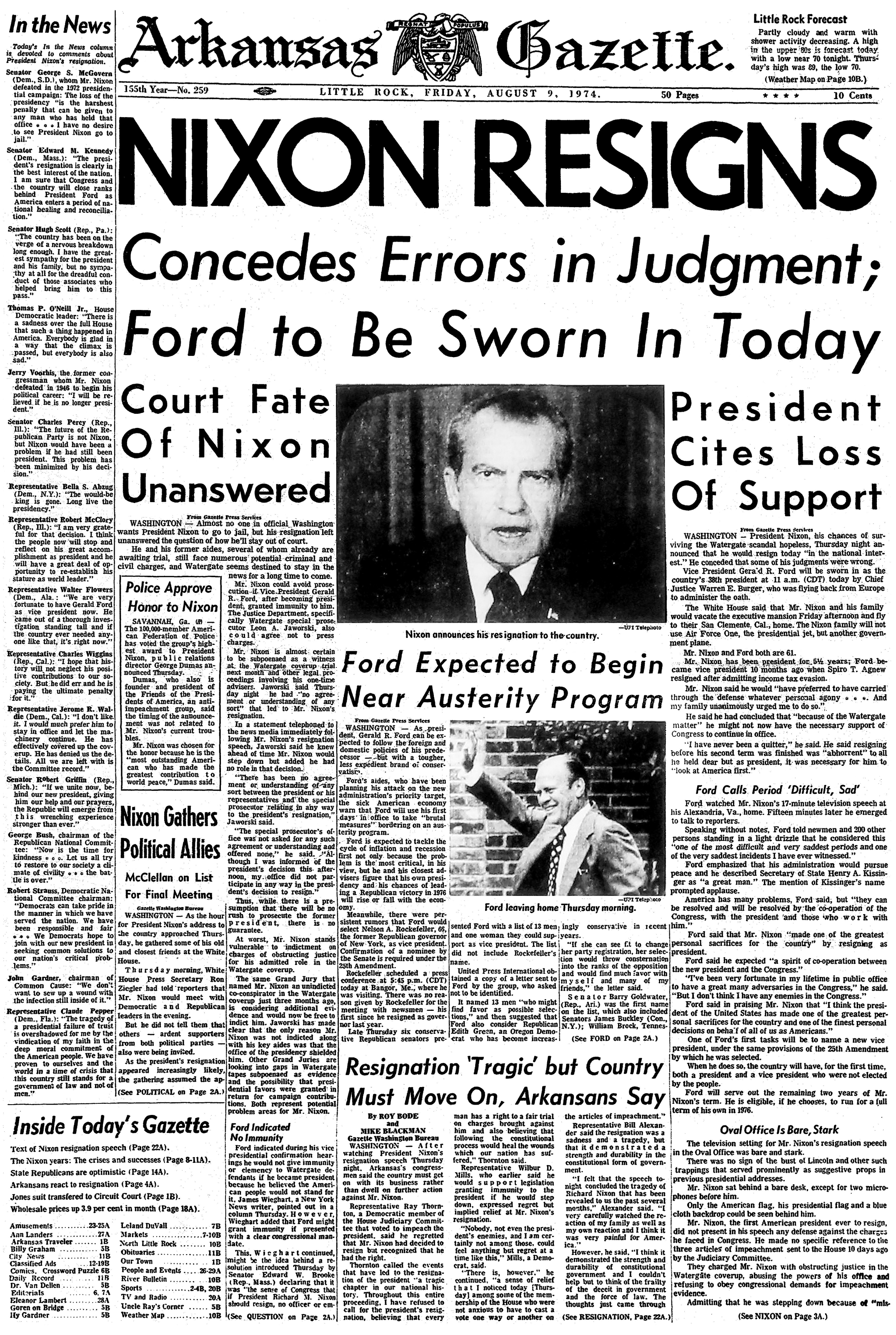