Never mind that he’d come home before, and relatively often, considering the demands of his career: He was The Man in Black who sang for prison reform, a working-class hero with a catalog of hits and Grammy awards and a best-selling autobiography in print. He’d been busy in the studio recording a new album and was about to release a novelty single about a factory worker who steals parts off the line to build his own Cadillac, “One Piece at a Time.”

His time was valuable: ABC had aired The Johnny Cash Show in prime time. He was a friend of the Rev. Billy Graham and appeared at Graham’s Crusades. Equally open about his addiction and his Christian witness, he drew adoring crowds.

Also, he could have begged off: He’d broken a bone in his foot in February.

But as a favor to boosters of his ancestral family home — Cleveland County — he donated his star power to its small-town celebration of the U.S. Bicentennial. The Bicentennial was a randomized American birthday party to honor the 200th anniversary of the adoption of the Declaration of Independence. Patriotic events popped up independently of one another across the nation from April 1975 through July 4, 1976. There were speeches, concerts, TV shows, postal stamps, a rail train tour and a wagon train tour, painted fire hydrants, commemorative coins, paper dolls, tall ships, a Bicentennial lottery in New Jersey, fireworks, and parades “from East Eagle Jaw, Maine, to Falling Arches, Oregon,” as ABC newscaster Harry Reasoner put it at the time.

On March 20, Johnny Cash Day began at Kingsland, where he was born Feb. 26, 1932. (The house where he was born burned after his family moved to Dyess in Mississippi County, where his boyhood home is a museum today.) He and his wife, June Carter Cash, boarded a train on the Cotton Belt Line and rode to Rison. During the trip, ABC’s Geraldo Rivera interviewed him.

At Rison, Cash was grand marshal for a parade. Then he and June and their troupe performed on the Rison High School Football Field.

Rison was not his only Bicentennial parade. Wearing the same black shirt with vibrant double eagles on the shoulders — or one very similar — he also was grand marshal of the American Bicentennial Parade on July 3 in Washington, D.C. Cash got to motor past an estimated 500,000 cheering Americans on Constitution Avenue in a 1936 Packard convertible followed by Vice President Nelson Rockefeller in another car to a reviewing stand where both of them got to watch the rest of the national parade from behind bulletproof glass.

But what he did for friends and family in Cleveland County that March required no bullet-proofing, and the generosity and fun of it is remembered there today. See arkansasonline.com/200/bonus1976. 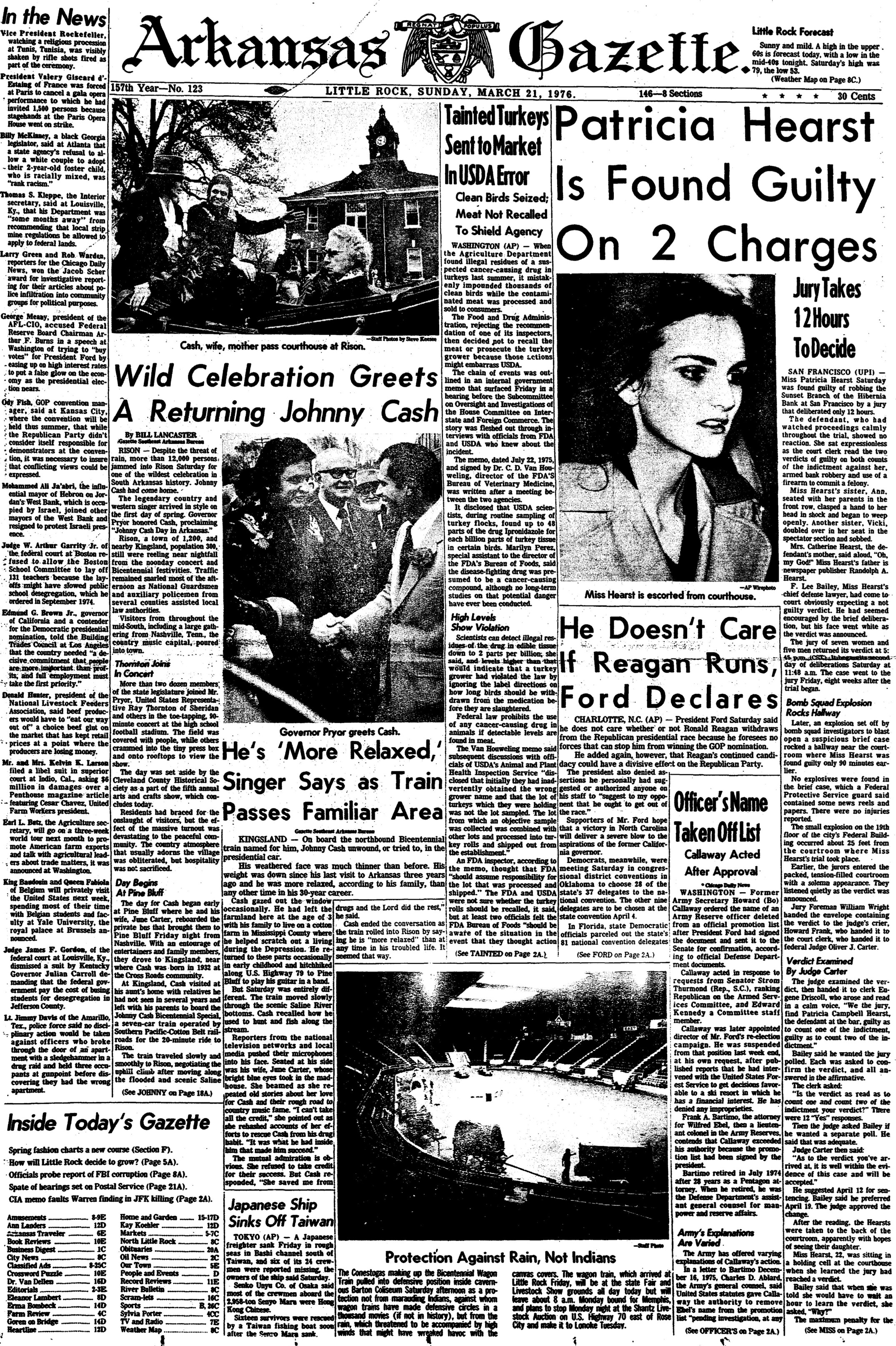