Elvis Aaron Presley, the $35-a-week truck driver whose road to become the nation’s highest-paid entertainer had included a few stops in Arkansas, was found dead on a bathroom floor in Graceland on Aug. 16.

The next day’s paper reported that within 24 hours, sobbing and screaming fans had swarmed the mansion and formed two mile-long lines on each side of the gates where flowers — Memphis florists were suddenly facing a shortage — had been woven through its wrought-iron guitars and musical notes.

“Do not push and shove. You are hurting small children,” commanded a lawman through a bullhorn, one of 120 officers called out for crowd control and reinforced by 30 National Guardsmen. Only 20,000 were allowed to pass through the Music Room where the open, copper casket held Elvis’ body clad in a white suit and pale blue shirt. Many fainted and had to be carried out. More than 50,000 never got through the door.

“Please don’t say he was fat,” Mary Murphy of Memphis implored a reporter on the lawn. “They made him look fat in the coffin. People must know he doesn’t look like this.” She thrust the locket dangling around her neck that held his photo. “He looks like this.”

Shelby County Medical Examiner Dr. Jerry Francisco quickly pronounced the cause of death to be an “erratic heartbeat” and declared that there was “no evidence of any illegal drug use.” It fit with President Jimmy Carter’s homage to “a symbol of America’s vitality, rebelliousness and good humor.”

Plenty of Arkansans agreed, like the ones who knew Elvis in the early ’50s when he’d hitchhike to Little Rock on weekends for a chance to sing to the post-show crowd at Robinson Auditorium’s Barnyard Frolic. The guys, said guitarist A.C. Lynch, “didn’t think he was all that good of a singer, but he had a lot of personality on stage … He was out to go to the top, and that’s what he done.”

Gazette critic Bill Lewis, at Elvis’ final Little Rock concert in 1972, marveled at how grown women could still squeal at the “staccato shaking of that left leg … arched away from the right like an Indian scout’s, the wildly flinging arms … the fluttering fingers, the sensuous Father Earth pelvic thrusts.”

But retired soldier Alan Deaver of Hartman, an MP assigned to guard the future King of rock at Fort Chaffee in 1958, remembered a quieter Elvis who laughed as his head was shorn and talked about having to grow some more hair.

“It sounds corny, but he really believed in his country, and he was willing to accept the fact that he’d been drafted.”

Buried inside the day’s Gazette, American drivers had cause for a little more doubt in Detroit as Ford recalled 600 Pinto subcompacts over gas tanks that exploded in rear-end collisions. In New York City, postal worker David Berkowitz, 24, pleaded not guilty to being the Son of Sam serial killer; attorneys anticipated an insanity defense. 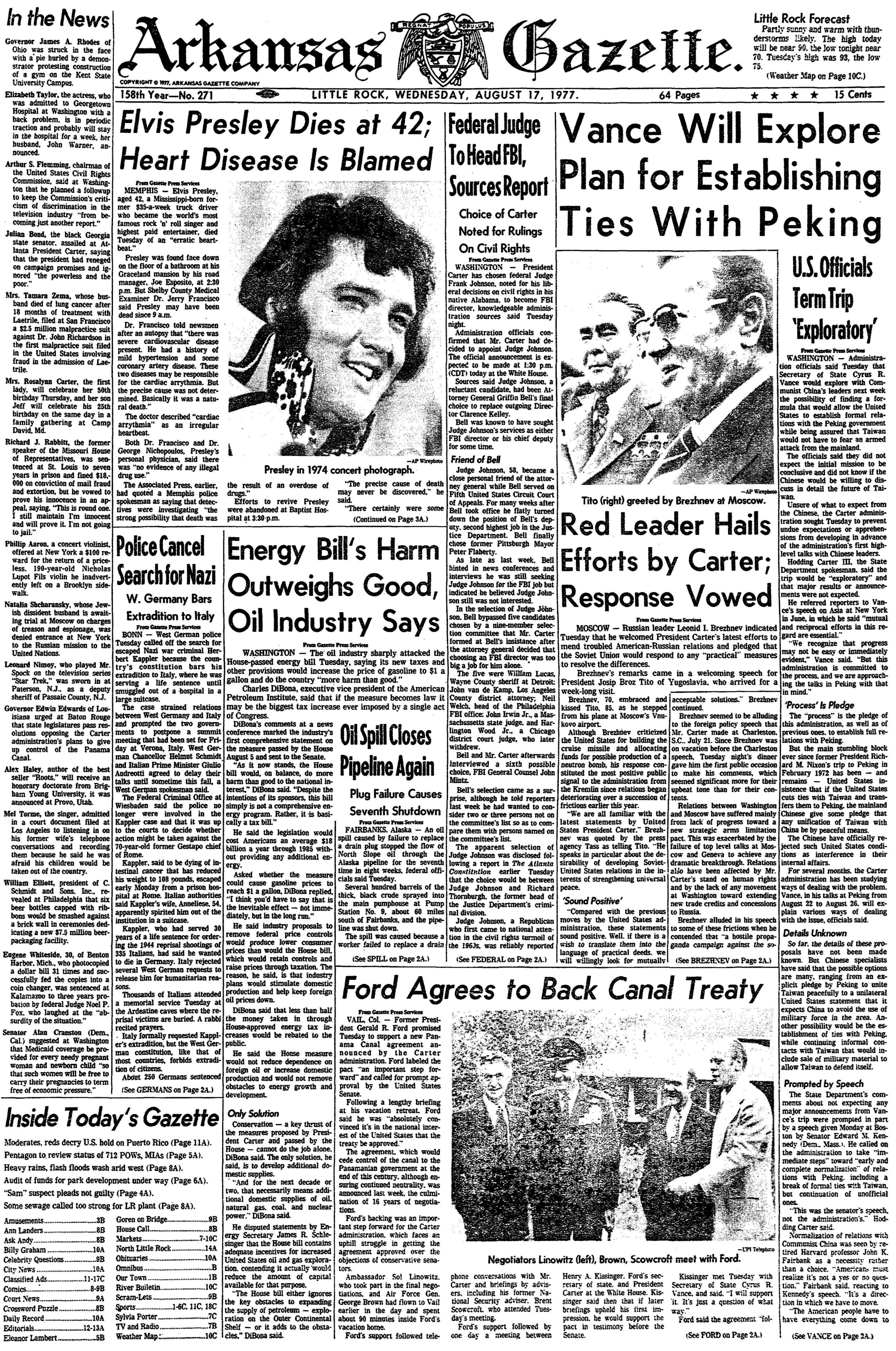